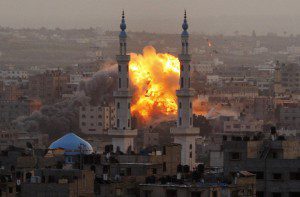 I’m at the end of a rather long trip to London, which is why I haven’t been able to process or upload either Duck of Minerva or NBN podcasts yet. Nevertheless, I’ve got some good stuff coming on both fronts. So stay tuned.

Al-Jazera reports that 92 Palestinians have now been killed by Israeli attacks. The Washington Post leads with essentially the same story. CNN is certainly paying attention to the civilian death toll, even as it reports on the “success” of Iron Dome in protecting Israeli cities. Wired has an interesting report on the “social media” war with plenty of links, including details on the Iran-supplied Fajr-5 rockers being used by Hamas.

Gilad Sharon has an extremely hardline essay in the Jerusalem Post. Leslie Gelb lays most of the blame for the current crisis on Hamas. Richard Falk takes the opposite tack, and John Mearsheimer attacks the strategic logic of Jerusalem’s turn to force. Dan Schueftan and Hisham Melham disagree with one another on the PBS Newshour. Dan Byman, Barak Mendelsohn, and Ehud Yarri each contribute to the debate in Foreign Affairs. Steve Walt thinks that the crisis is basically an omnishambles, while Marc Lynch speculates on the likelihood of pan-Arab mobilization.

I don’t usually say very much about Israeli-Palestinian politics. The subject is pretty much radioactive. Indeed, I’ve recently seen a number of Facebook feeds descend quickly into vitriol. But I feel compelled to comment, even if that means a rather awkward walk through carefully phrased prose.

To begin with, Hama’s stance on Israel is indefensible, the Israeli blockade of Gaza is a humanitarian disaster, well over a thousand rockets have been fired into Israel over the last two years; and nearly a hundred Palestinians have died–most of them civilians, and quite a few of them children.

The causal chain goes further back, of course, and partisans tend to start at whichever place best suits their argument. The easy route? Simply declare both Hamas and the Israeli leadership culpable–or to measure out blame in dribs and drabs. But if we step back from the question of culpability, it seems to me that (1) Israel is doing itself no favors by engaging in an aerial campaign whose chief victims are Palestinian civilians, and (2) it is hard to understand why children younger than my daughter, young people who could be our students, and old men and woman who could be our grandparents and great-grandparents must die for Israel’s security.

Moreover, much of the key speculation concerning the conflict focuses on Iran. Is Israel trying to adjust the landscape in preparation for an attack on Iran? Is Iran trying to distract Israel by increasing Hamas’ capabilities? How does the condition of Hizbollah and the Syrian civil war play into the violence?

Comments welcome on these or other issues… but keep it civil.