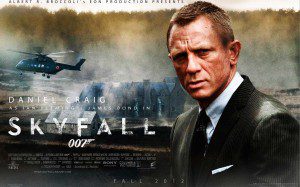 This is a guest post by Brandon Valeriano of the University of Glasgow. The post contains mild spoilers, so considered yourself forewarned.

Cyberwar is everywhere. I am sure there is some selection bias in my perspective, but I canít read the news without finding another ‘cyberwar will be the new 9/11‘article. The narrative? Our digital futures are in a precarious balance and threatened by the great cyber powers itching to destroy our lives, finances, and prevent access to the Playstation network through cyber attacks.

Now James Bond is getting in on the fun with Skyfall. In the disastrous first act (at least for me, although the overall movie might be a top five Bond film ever), the villain turns out to be a skilled cyber warrior. He is capable of blowing up buildings with a simple virus and his entire criminal enterprise seems build on his cyber abilities.

Just like Moonraker, and whatever Octopussy was, Skyfall goes too far. There is no logic or reason to the capabilities of the Javier Barden villain Silva. Somehow the villain is able to escape from containment due to a cyber worm that defies all logic. We are all helpless to the threat of cyber warfare, even James Bond. Bond himself actually triggers the worm by putting together an innocuous series of letters in lines of code. All hell breaks loose, providing James Bond with his raison d’Ítre, eventually saving the day and ìBritish civilization.î

The debate on cyberwar needs to be returned to some level of rationality. Skyfall is a symptom of the wider failure of society to understand just what Cyberwar is and the threat it represents. I define Cyberwar as ìthe use of computational technologies in diplomatic or military affairs in the international system. The discourse seems to be that cyberwar will lead to a revolution in military affairs as the battlefield moves to cyber space. Along with a changing battlefield, the targets will change and civilians will be threatened by this new development. Supporters of this idea have already rushed to suggest that Skyfall is the most realistic Bond ever [https://uk.news.yahoo.com/bond-s-most-realistic-enemy-ever—cyber-experts-say-skyfall-risk-is–real-.html].

Unfortunately, fears of the capabilities of cyber warriors seem to reach a level of absolute certainty that the worst case scenarios will come true. Our future will be shaped by cyber attacks that will control our destinies. But first, let us take a step back. My coauthor and I have collected data that demonstrates that cyber attacks are relatively little used tactic. We reason that states restrain themselves from using the tactic because there is the fear of blowback, civilian collateral damage, and retaliation through replication of the attack. Many see Stuxnet as a harbinger for the future. I tend to think of it as an outlier, an outlier that was not very effective and unintentionally escaped from the bounds of Iranian military networks.

In reality, cyberwar is a tough tactic to utilize. Cyber attacks are not exactly the future of combat, diplomacy, and human relations. While computers shape our lives, it is by no means assured that cyber attacks will take place at a level that will impact our day to day lives, let alone the foundations of British intelligence headquarters. These worst case scenarios are not helpful, if anything they make us less secure by convincing actors that constant cyber warfare is the coming reality.

We must step back from this imagined cyber brink. If James Bond canít stop the cyberwar future, who can? Our perception of cyber conflict is indicative of a perspective that the world is perpetually insecure and dangerous. There are very few ‘bogeymen’ in this world and much of the fault for any particular cyber attack can be placed on the actors themselves rather than the nature of the tactic. If plans for the latest jet are stolen, might it not have been a good idea to allow them on the network in the first place? If Silva was able to blow up MI6 with a simple computer program, MI6 probably had too many security issues to sort out that had nothing to do with the nature of cyber attacks. In the end, we can be reasonably confident that there is a developing set of norms or regimes that will regulate the use of cyber tactics. I predict that it will continue to be a little used tactic. If I am wrong, we can trust in James Bond to save the day.