Some US 2012 Election Predictions (Updated) 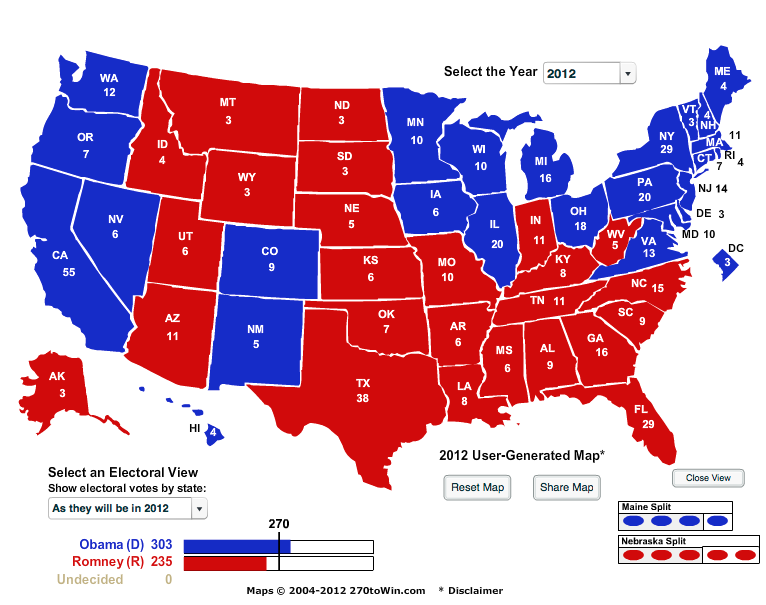 For obvious reasons, I’m much less confident of my predictions in 2012 than in 2008. I think there’s a good chance that Florida, Colorado, and Virginia might go the other way. North Carolina and New Hampshire could as well.

Regardless, it looks pretty likely that Obama is going to win re-election. I’m betting the hispanic vote pushes Obama over the top in Nevada (uncontroversial) and Colorado (more controversial); that his lead in Ohio is large enough not to be negatively impacted by long waits at urban polling stations; and that he runs up sufficient margins in Northern Virginia and Richmond to carry my home state.

Incidentally, I’d also wager that Tim Kaine wins even if Obama suffers a narrow loss in Virginia, but I’m not willing to make a wager on the Senate races in Wisconsin, North Dakota, and Montana. If I had to pick a “surprise,” it would be that Heller loses in Nevada due to the Reid electoral machine. With respect to other competitive races: I expect a Democratic hold in Missouri, and a pickup in Indiana and Massachusetts [edited].

There also remains a chance of a split in the electoral and popular vote, perhaps helped along by lower turnout in New Jersey and New York. Still, I expect Obama to carry the popular vote and the electoral vote. If the apparent fantasyland thinking found in Republican blogtopia turns out to be real — and Romney does win — I’d wager on a uniform swing sufficient to change a significant number of states. If that happens, it shouldn’t be the modellers who suffer a loss in credibility, but the pollsters.

I disagree with Robert about the significance of this election. In foreign policy, the likely outcomes of a Romney administration range from continuity to a neoconservative restoration. In domestic politics, the consequences could be very bad for progressive causes.

The radicalism of the Republican party and the House of Representatives means that a Romney victory could have significant implications for the United States, including on fiscal policy, tax policy, and the welfare state. The result might very well be greater structural barriers to the progressive agenda, greater inequality, and a return to the kind of free-for-all rent-seeking by powerful interests that we saw during the Bush years. Another round of permanent tax cuts would, for example, cripple future federal infrastructure and social spending.

It is possible that the Democrats in the Senate will become the party of “no,” but I’m not so confident… particularly because the kind of systematic error necessary for a Romney victory means that the margin in the Senate will be less than the 53-55 Democratic majority that currently looks likely, and therefore allow the Republicans to gain a working majority on some issues. Even if the Democrats block the worst of the agenda, a Romney administration could eviscerate consumer and environmental protections through the power of executive orders and regulatory decisions.

There’s also the matter of the Supreme Court and the rest of the Federal judiciary. Given the age and health of many members of SCOTUS, Romney might very well be in the position to create a 6-vote block capable of making major changes to US constitutional law. Even the replacement of Kennedy will likely end Roe v. Wade — or at least lead to its functional overrule — and the replacement of one of the “liberal” wing could very well make some version of the “Constitution in Exile” very real. The results for the country would be disastrous. Even if Romney governs as a moderate he will likely make very conservative judicial appointments. Indeed, a “centrist Romney” would probably be compelled to make such appointments in order to appease the Republican base.

Consider this an open thread for election and policy predictions. I don’t know if anyone will weigh in at the Duck, but we did have some decent discussion on a similar thread in 2008. If you haven’t seen my prefab November 7th headlines, check them out.

UPDATE: Outside the Beltway has rounded up predictions from peer-level pundits. No major surprises. I didn’t know James Joyner was going to vote for Romney, though.

THE ACTIVISTS: War, Peace, and Politics in the Streets