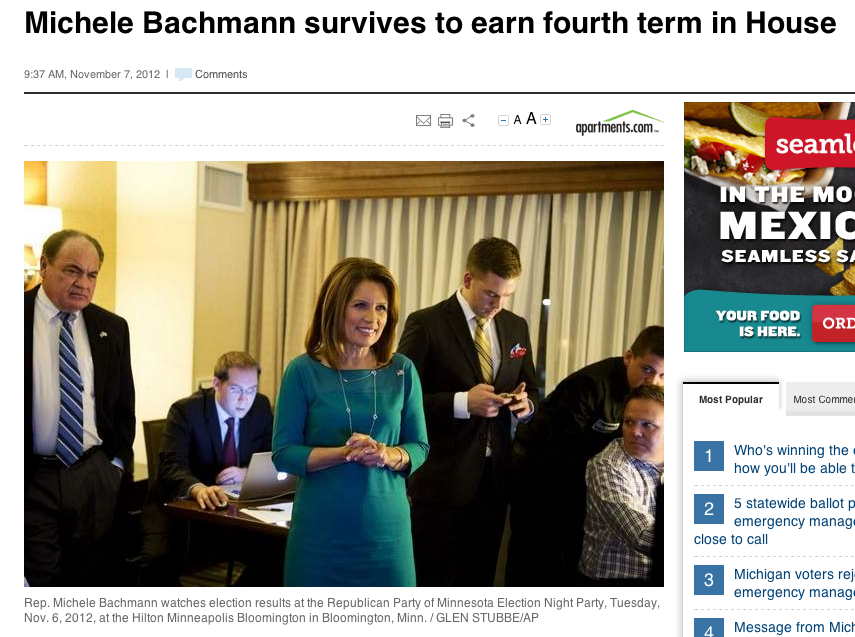 One nice thing about a status-quo election: it doesn’t leave international-affairs experts with a great deal to prognosticate on. It will be interesting to see if the administration does, indeed, show more “flexibility” on BMD cooperation with Moscow and if it makes a push on Israel-Palestine. We should see a fresh wave of talent coming into the administration. While the money right now is on John Kerry for Secretary of State, I’m more interested to see if people like Colin Kahl come back into the bureaucracy.

My main reaction last night was relief. And pride that the people of Maryland endorsed same-sex marriage at the ballot box. But the 2012 election makes clear how far the GOP has strayed into the epistemological wilderness. In 2009 the Republican elite made a decision to destroy Obama by blocking his center-right agenda. On issue after issue, the Democrats had adopted Republican policy positions: on health care reform, on the war on terror, on reducing carbon emissions via “cap-and-trade,” and on immigration reform. As the joke during the closing days of the 2008 campaign went, the difference between “socialism” and “faith in free markets” amounted to nothing more than a slightly higher rate on income in excess of $250,000.

The GOP doubled down on this rhetoric. The conservative movement adopted the strategies of the 1990s that they’d deployed against the Clinton Administration. These strategies, however, played out in a different context.

On the one hand, they faced a more conservative Democratic party. Thus, positions once endorsed by the Heritage Foundation became evidence of Obama’s crypto-Marxism. Rand replaced Hayek. On the other hand, the Obama Administration is one of the cleanest in American history, and Obama shows no evidence of sharing Clinton’s outsized appetite for adulterous liaisons. But it didn’t matter: the conservative messaging machine transformed bogus scandals and small-potatoes political opportunism into evidence of the “most corrupt administration in history.”

By the 2010 midterms, the Tea Party — too often co-opted by Republican influence-peddlers and flogged relentlessly by Fox News — helped nominate candidates who broke from GOP elite orthodoxy in one crucial respect: they actually believed the propaganda so central to whipping the base into a frenzy. And because of the economic climate, the Republicans won big. The useful idiots generally failed in the higher-profile Senate, of course. In the House, however, they made it impossible for Speaker John Boehner to engage in anything resembling governance. The patients, as the phrase goes, took over the asylum.

Conor Friedersdorf — who, along with David Frum, now occupies the “reasonable conservative” [ed note: Fredersdorf is a libertarian] niche once claimed by David Brooks — makes this point in unsparing detail in a remarkable piece at the Atlantic. Consider this extended excerpt:

Conservatives were at an information disadvantage because so many right-leaning outlets wasted time on stories the rest of America dismissed as nonsense. World Net Daily brought you Birtherism. Forbes brought you Kenyan anti-colonialism. National Review obsessed about an imaginary rejection of American exceptionalism, misrepresenting an Obama quote in the process, and Andy McCarthy was interviewed widely about his theory that Obama, aka Drone Warrior in Chief, allied himself with our Islamist enemy in a “Grand Jihad” against America. Seriously?

Conservatives were at a disadvantage because their information elites pander in the most cynical, self-defeating ways, treating would-be candidates like Sarah Palin and Herman Cain as if they’re plausible presidents, rather than national jokes who’d lose worse than George McGovern….

How many hours of Glenn Beck conspiracy theories did Fox News broadcast to its viewers? How many hours of transparently mindless Sean Hannity content is still broadcast daily? Why don’t Americans trust Republicans on foreign policy as they once did? In part because conservatism hasn’t grappled with the foreign policy failures of George W. Bush. A conspiracy of silence surrounds the subject. Romney could neither run on the man’s record nor repudiate it. The most damaging Romney gaffe of the campaign, where he talked about how the 47 percent of Americans who pay no income taxes are a lost cause for Republicans? Either he was unaware that many of those people are Republican voters, or was pandering to GOP donors who are misinformed. Either way, bad information within the conservative movement was to blame.

In conservative fantasy-land, Richard Nixon was a champion of ideological conservatism, tax cuts are the only way to raise revenue, adding neoconservatives to a foreign policy team reassures American voters, Benghazi was a winning campaign issue, Clint Eastwood’s convention speech was a brilliant triumph, and Obama’s America is a place where black kids can beat up white kids with impunity. Most conservative pundits know better than this nonsense, not that they speak up against it. They see criticizing their own side as a sign of disloyalty. I see a coalition that has lost all perspective, partly because there’s no cost to broadcasting or publishing inane bullshit. In fact, it’s often very profitable. A lot of cynical people have gotten rich broadcasting and publishing red meat for movement conservative consumption.

Remember when Karl Rove said that we “make our own reality” and many Democrats adopted the phrase “reality-based community?” In that era it was still possible for liberal and conservative bloggers to have substantive arguments about key national challenges. Over the last four years, though, I’ve watched many former conservative blog friends descend into delusional paranoia. The zenpundits, OTBs, and Glittering Eyes have become fewer and fewer. This reflects, I think, the frightening state of the modern GOP and conservative movement.

There is no “pox on both your houses” possible here. The worst excesses of the left during the Bush years never penetrated far into the Democratic Party. And, frankly, the stakes were much higher. The Bush Administration fought a war of choice that killed thousands of Americans and many more Iraqis. It did so with inadequate planning and unrealistic assumptions. In the process, it screwed up the war it had already launched in Afghanistan. The stakes in the Obama Administration? The threat to western civilization posed by high-speed rail and an unwillingness to shred what passes for a “safety net” in the United States.

Will the GOP faithful join the reality-based community? There are glimmers of hope today, but this election was nowhere near as devastating as 2008 and we saw what happened after that. At the same time, no amount of haranguing by apostates or head-shaking by liberal intellectuals will help it do so. The GOP has some real quality in its bench, but there’s no evidence that those on it will stray far enough from party orthodoxy to make a difference. The Republicans need to wean themselves from the Koch brothers and other industry heavyweights with a vested interest in promoting environmental delusions and making the tax code as regressive as possible, but I cannot see how this will happen.

In short, I am not optimistic about the state of the party that speaks for nearly half of Americans, and therefore I find it hard to be optimistic for these great United States.