Wombs and Periods: the real threat to national security 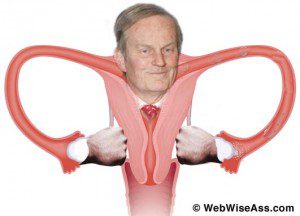 If you ever thought that emotion, mythology, and the uterus didn’t matter in foreign policy, reading debates about women in the military should change your mind. I expected some debate to ensue when Foreign Affairs agreed to publish an essay called Let Women Fight in their November/December issue (cough shamelessselfpromotion cough), but I was blown away by the comments posted on a preview of the article in the Daily Beast last week. Sure, many responses to op eds are easily brushed off as rants or individuals blowing off steam, but it is worth looking at a few themes within the responses to show 1) the role of emotion and story telling in people’s responses 2)how closely the combat exclusion is directly linked to mythologies of the nation and imaginaries of ‘real’ war heroes and 3) the fixation with evil and unpredictable wombs and periods (seriously).
Within the over 100 responses to the Beast post, there were the expected references to physical standards (addressed in the FA piece), the ‘why would women want to fight’ argument, the ‘public won’t be able to handle women in body bags’ position (even though we already do), the ‘men won’t be able to stop themselves from raping’ argument (which I can’t fully address here), and generalized rants about unjust wars. However, four less expected themes emerged: 1) Sports Analogies; 2) Linking Combat to Abortion; 3) The Great Shortage argument (that women serving will contribute to a population decline and thereby destroy the empire); 4)The Menstruation Fixation (my favorite).
What’s interesting about each of these themes is that they are never based on facts or research, but always rely on stories, assumptions, and fears about the nature of men and women. Let’s talk about each briefly

1)Sports analogies: Maybe this is the least surprising, but it still strikes me as odd that someone would compare the NFL or the NBA to warfare and argue that because no woman could block Lebron James, they shouldn’t carry guns either. And according to one response “TheWilliam’s sister’s [sic] in Men’s tennis? chopmeat. same deal on the battlefield.” I guess soldiers don’t really need physical standards or basic training then, whoever can serve the fastest or slam dunk gets a uniform?
2)Linking Combat to Abortion: So this one is just weird and really seemed to come out of left field (it’s a male baseball analogy, don’t worry). You gotta read this to believe it
Comment 1: “After hearing Republicans tell us that women are ready to kill their unborn babies at the drop of a hat and that some will even lie about being rapped just to be able to kill – well…
If we can’t trust women to make a decision regarding abortion – how can we trust them to carry guns around (they should probably all be disarmed since they are potentially ready to kill and will even lie in order to do so)- let alone be actually fighting?” Comment 2: “Women are willing to pay with their lives for their country but not pay for BC and their own abortions?” Not sure what to say here except to reiterate that there is no logical reasoning or evidence here, just a generalized linking of a women’s uterus with her inability to fight.
3)The Great Shortage argument: I’ve seen this a few times so it doesn’t surprise me as much anymore, but it still seems a bit crazy-town to me. The argument is summarized by this response “But men can’t give birth, so if all of the women die in a war we’ll run out of babies. And so would begin the age of the Great Shortage.” In other venues I’ve heard the position elaborated this way: women only have one uterus and men have millions of sperm, so it is less-wise to sacrifice our women if we want to preserve the nation. Luckily, another responder pointed out that a. women in the military can have babies b. only about 200,000 women are in the military- so even if they all became infertile I’m sure the other 100 million or so could pick up the slack. But once again, we have men linking the uterus to combat.
4)The Menstruation fixation: Stories like the following exemplify the position: “Just this week I was talking to a nice young lady who is very tall and athletic. She goes to college on an athletic scholarship and regularly does things that would have killed me on the best day of my life. And this week her boy friend had to carry her upstairs to her bed because her monthlies hit her so hard. Physically, we are just not the same.” Arguing that women- at any point in the month- may break down and be completely incapacitated is a mythology that is useful for devaluing and degrading any of the women who have proven themselves (and really who calls menstruation ‘the monthlies??). It seems like these folks are saying “she may be brave now, but just wait a few days…” Here’s another potential menstruation war mishap that a responder imagines: “I can just envision it now. WWIII breaks out and we have all women on the frontline. First, we ambush the enemy with laughter once they see a bunch of pre-menstrual infantry charging them, and then when all the females get wiped out by the female-loathing, Allah-praising insurgents, the feminists go nuts on the army for putting the women up front. It’ll be like something out of a Sacha Baron Cohen movie.”

So it seems from at least 3 of the 4 themes that the real drag for women (and the military) is their wombs (I can’t fully figure out the plural of uterus). We might get pregnant, abort, menstruate, fail to reproduce the nation at any moment and thrown off an entire war and end an empire. Damn, if only we’d known. Maybe part of basic training now needs to include basic information about how women’s bodies work. Demystifying the female body would reduce womb anxiety and show men that women manage just fine month to month- uterus and all. Let’s let the womb fears and the menstruation fixation go ok guys (it really is only men who fret about this). How do you think current female soldiers, olympic athletes, and CEOs (and EVERY other woman) manages? As Tina Fey recently said “they’re tampons, get over it.”