I wasn’t going to post anything about the cyber-intimidation campaign being directed at Erik Loomis, as that seemed like a job for Big Important Liberal Blogs and not for the Duck of Minerva. But now the issue has strayed directly into our territory.

In brief, Erik Loomis is a history professor at the University of Rhode Island and a long-time blogger. His highest-profile gig is at Lawyers, Guns & Money. In the immediate aftermath of the Newtown massacre, Erik tweeted that he “wanted to see Wayne LaPierre’s head on a stick.” The usual suspects in the conservative blogsphere soon translated this into the idea that Erik had called for LaPierre’s assassination.

The rest played out as you might expect. The stupid spread throughout the right-wing echo chamber, leading to depressing pot.kettle.black bullshit and, soon enough, calls to the Rhode Island police etc. etc. Erik was forced to delete his Twitter account, leading to the same kinds of losers who whine about “suppression of speech” at the slightest opportunity to crow victorious.

Now, we can debate Erik’s language and the general use of violence-oriented metaphors by political partisans, but there’s no one who isn’t either an idiot or arguing in bad faith could interpret “head on a stick” as a call for literal murder. As an Erik notes (borrowing from an LGM commentator):

Here is Glenn Reynolds, so outraged by my intemperate language, asking “can we see some heads roll” over the Benghazi attacks. Does Reynolds literally want to see the head of Susan Rice decapitated from her body? Of course not. It’s a metaphor. I wouldn’t have even looked twice at that line because I know exactly what he means, even if I disagree with him. Not to mention that Reynolds has quite literally called for the assassination of Iranian nuclear scientists.

So why talk about this? Well, here’s the official statement from the President of the University of Rhode Island: 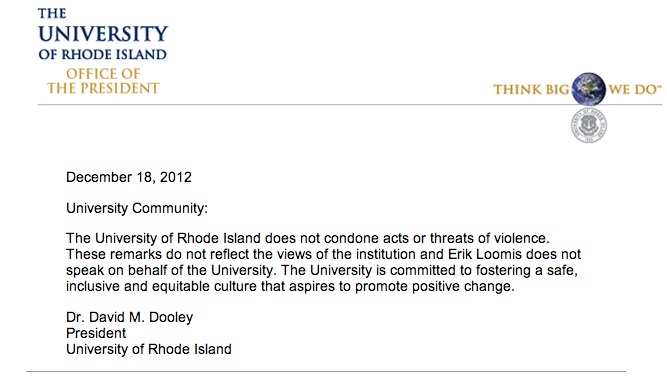 The President’s office might have condemned Erik’s language. It might have simply reaffirmed the University’s opposition to “acts or threats of violence.” But no, Dr. David M. Dooley — PhD in the Practice and Theory of Pusillanimity, no doubt — pretty much implies that Erik’s remarks are, in fact, “threats of violence.”

And it gets worse. Note that David Dooley clearly believes the honorific “Dr.” important enough to use on his official correspondence. But Dr. Erik Loomis, who holds a professorial appointment at David Dooley‘s university? Not so much as a “Mr.”

Podcast No. 16: A Discussion with Robert Farley