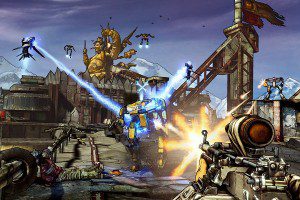 I stayed up too late  last night drinking cheap Scotch and playing Borderlands 2.

Then I accidentally snagged the wife’s computer — she’s somewhere that has a high of -40° today — but, thanks to the wonders of multiple-user operating systems and Dropbox, I think I’ll get some work today.

Anyway…. I know that the point has been made before, but during the 2012 election the opposition party in the United States attacked the President relentlessly for ‘cutting Medicare.’ A month after the election, though, they’re all like “slash Medicare or we’ll blow up the economy!” Words fail.

Moving on to more bipartisan subjects, Mark Safranski really likes Adam Elkus’ “The State Problem in National Security.” It does read like one of those great posts in which someone in graduate school thinks through a major policy report–in this case, Global Trends 2030.

Speaking of global trends, International Studies Quarterly has an “early view” version of a multi-authored piece called “Predicting Armed Conflict, 2010-2050.” The piece intersects nicely with what PM and I call the “exotic IR” problem, insofar as it predicts conflict by simply plugging straight-line projections into an inductively-derived statistical model.

Daniel Little has a nice piece on “simulating social mechanisms” that, oddly enough, reminds me to plug the Duck of Minerva’s upcoming symposium on The Hydrogen Sonata. I forgot to link to another one of his posts, on “Latour’s Invisible Paris,” which reminds me that I need to touch base with Vincent Pouliot about an ANT thing we are supposed to writing.

Last night I wound up having to explain (poorly) declensions to Lyra. We made up a suffix (-iack) for nouns that differentiated between whether they were subjects or objects and substituted them for I/me, him/her, and who/whom. Eventually we started messing with word order until it became clear that casing nouns makes word order less important–or, alternatively, that English uses word order to compensate for the loss of declensions.

None of this is terribly original; indeed, I just discovered that the authors of the wikipedia page on the subject do it much better. The important point is this: once the idea clicked, Lyra loudly declared that “grammar is really cool.” “And I thought,” she added, “that it was boring!” Yeah, the idea that we can encode different degrees of information into words based on how our language is structured? That’s pretty f-ing cool.

For news on international politics — which I don’t seem to be providing today — UN Dispatch is always a good one-stop shopping experience.