Why no Cuban Spring?

I am currently at the Social Science Research Center in Berlin to present a paper on norm suppression. While here, I had the opportunity to learn more about some of the work being done by the Civil Society, Conflicts, and Democracy research unit. Listening to these folks talk about the stability of authoritarian regimes reminded me of some thoughts I had when I recently travelled to Cuba to present another paper.

In addition to prepping for that presentation, I was also reading for my Arab Spring and Social Media course I will teach in the Spring. Needless to say, revolutions were on my mind. And the thought foremost on my mind was, why has there been no Cuban Spring? In some ways, the conditions in Cuba are similar to conditions in Egypt prior to Mubarak’s resignation. High levels of unemployment and underemployment, a relatively well educated population, a pervasive sense of discontent with government policies, and an awareness that these grievances are collectively felt. Could it be that Cubans, unlike Egyptians, haven’t taken to the streets because the Castro regime has successfully been able to scapegoat the United States for the troubles which plague this island? While in Havana, the issue of the trade embargo came up before the UN General Assembly. How the United States voted was widely known. Billboards such as this one can be found throughout Havana, particularly around the airport: 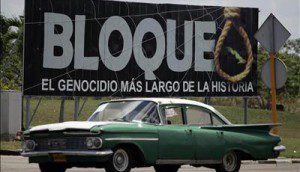 Another possibility offered to me while in Havana is that Cubans are passive people- they accept the status quo, rather than challenge it. That seems hard to believe given Cuba’s history of popular resistance. But even so, Wael Ghonim characterized Egyptians in much the same way.

Not knowing much about Cuba or authoritarian regimes, I don’t really know the answer. Perhaps someone with greater expertise than I do can offer some insights.