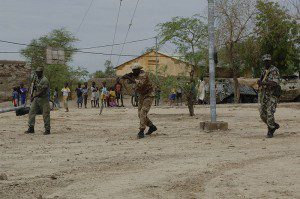 And voila, the erstwhile wishy-washy Francois Hollande says “And me, not just Sarkozy” with across the board support from both French public opinion and Malian public opinion, plus that of the UK and U.S. governments.  The same set of circumstances framed the successful U.S.-European intervention in Libya just over a year ago.  Only since then, the vast majority of foreign policy thinkers/commentators have predicted a one-way direction for Western troops (out of Iraq and Afghanistan and back to their barracks).

When I recently left the U.S. government I had a Truman Show type experience, having worked with government colleagues who were sanguine about not only the Libyan operation but potentially others to follow.  However, immediately upon leaving I discovered everyone else in DC had written off Europe entirely, determined that the Muslim Brotherhood was evil incarnate, and devoted itself to fiscal cliff navel gazing.  In my first government meeting as a private citizen again, I found myself arguing to a high ranking army officer that “Far sooner then China will ever even think of taking us on militarily or even attacking Taiwan, the West will intervene again.”  To my surprise, he replied:  “Can I use that line?”

Personally I am right down this middle on the question of whether the current era will later be deemed the era of austerity or the dawn of the age of interventionism.  Much like the Obama Doctrine, which I define very simply as robust burden sharing, I think each case will represent a different matrix of national security calculations and any decisions will be made with a full consideration of not only our interests but also our limitations, economic included.

France is doing pretty much the same thing.  And you know what, I gotta hand it to them.  They made a successful intervention in the Ivory Coast that got very little attention here, and unlike Americans the French people are not as averse to operations that go awry.  Whereas we are simultaneously inured to the long death tolls in our current wars yet hyper sensitive about losing anyone on short term operations, the French also intervened over the weekend (with our help) to rescue a hostage in Somalia.  The hostage died, as well as two French soldiers, yet the French public is solidly in support of Hollande’s larger intervention in Mali.

Can you imagine the political hell to pay if President Obama’s rendezvous with Dark Thirty destiny had gone awry, with the loss of not only an expensive aircraft but also half or more of Seal Team 6 (and no OBL in a body bag)?  The prospect makes me think of a Jimmy Carter style ignominious defeat at the presidential ballot box.  I still marvel at the War in Kosovo or whatever historians have taken to calling it:  the first war in America’s history with zero casualties.

As for austerity vs. interventionism, we are now looking at a kind of present day global political experiment:  will the coming era of multipolarity be marked by an aversion to intervene or will a more unstable world occasionally threaten the interests of the poles to the point of warranting an intervention now and then?