It bears repeating that nobody votes on foreign policy, and most folks don’t know anything about it anyway (remember that a nontrivial number of Americans think South Korea is our greatest enemy). I’ll quote myself:

[N]obody gives a damn about foreign policy. Theories of democratic responsiveness and empirical models of foreign policy choice need to begin with this fact. Nobody cares! That thing we do? The international relations bit? It’s somewhat less important than professional bowling or HGTV. [Americans] only care about security–and their understanding of that is about as sophisticated as the Toby Keith song about the Statue of Liberty. …

[O]ur brilliant little theories about how voters express their desires over foreign policy rest on the idea that voters have some utility over foreign-policy choices. That, in turn, may also be flatly wrong. When voters vote, their choices are likely wholly driven by domestic factors. If that’s the case, there’s no residual term–foreign-policy voting is in the error term. This means that foreign policy should be relatively unconstrained, both ideologically (except among a very few elites) and in its implementation (because nobody cares).

I make the same point more diplomatically and, at much greater length, in my dissertation. I should note that the professional bowling jest was an exaggeration, but foreign affairs is demonstrably less important to voting behavior than college football (e.g., e.g.. I also point out that sometimes it’s okay to exaggerate for rhetorical effect.

Below the fold, I adduce new evidence that even the Council on Foreign Relations is somewhat ambivalent about foreign policy. 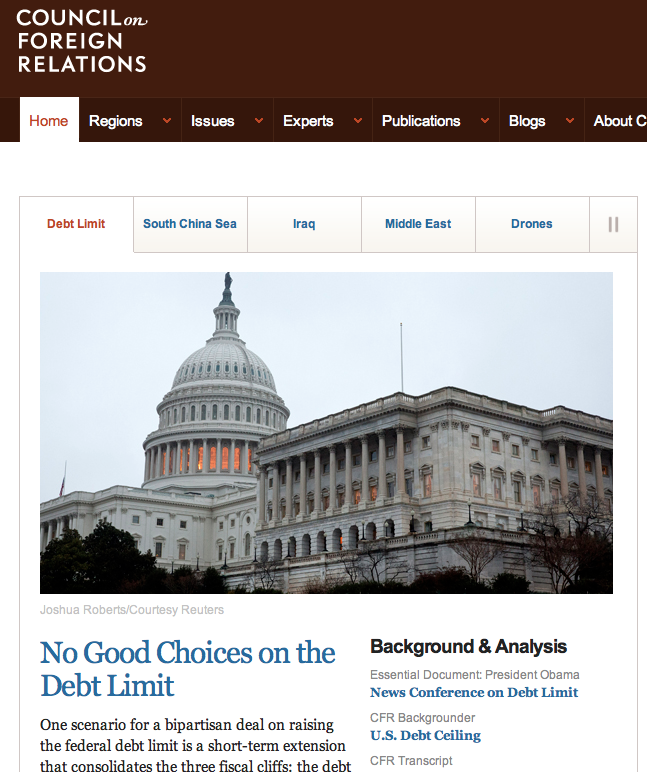 That’s a screenshot of the top story on today’s CFR.org, which I visited whilst harvesting linkage. What more telling sign of the pressures to report on the issues that readers care about than the fact that even the foreign policy establishment leads with the top domestic policy story of the day.

Another Virtue of Blogsphere Engagement?