About that Gallup LGBT Survey

In a nifty contribution to our understanding of LGBT politics, Gallup has surveyed more than 200,000 Americans to ask if they identify as LGBT or not. This gives us what Gallup claims and I’ll accept as the first state-level estimate of this dataset.

But Gallup mistakenly interprets their own findings (or, rather, do not fully extract as much information as they could). Gallup writes

While the variation in LGBT identification across states is relatively small, findings do suggest some evidence that the variation is not entirely random. Social climates that promote acceptance of or stigma toward LGBT individuals could affect how many adults disclose an LGBT identity. LGBT people who live in places where they feel accepted may be more likely than those who live in places where they feel stigmatized to reveal their sexual orientation or gender identity to a survey interviewer.

This map, which I made in R (hence the bizarre boundaries for Michigan, which are the official jurisdictional boundaries if we include the Great Lakes) using code inspired by Jack Santucci, shows a heat map of LGTB identifiers in the USA. I’ve broken the states up by deciles of LGBT identifiers to make the patterns stand out more. 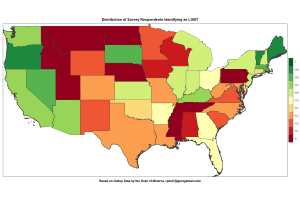 It’s pretty clear from this revised map (as opposed to Gallup’s map on its site) that there’s huge and striking variation among regions in respondents as identifying as LGBT. This may be due to social pressure not to identify as LGBT; it may be due to migration away from gay-hostile areas. But I thought this visualization might help clarify what Gallup has found.

Update At the prodding of commenters, a new map showing the DKNA (don’t know/no answer) percentage implied by Gallup’s reporting of the answers (this series is 100 – Yes LGBT – No LGBT as defined at the Gallup link above). 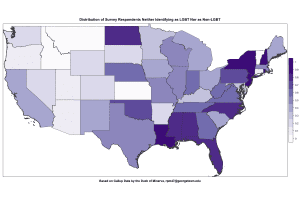 As Micah&Chris points out below, there’s some reason in this data to favor the social-pressure hypothesis. For my part, I do find the fact that both New York and New Jersey show up as high on the DKNA scale as they do a little puzzling but someone who actually knows something about this is likely posting in the comments.