Apples & Oranges & Women in the Infantry 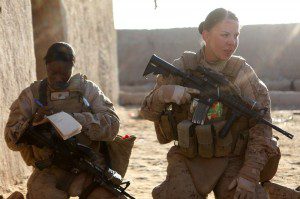 As the military grapples with how to implement the reversal of the decades old ban on women in “combat” specialties, one of the data points that many people are using (especially in and around the Marine Corps) is the performance of the only two female Lieutenants to have attempted to complete the Infantry Officer’s Course at Quantico.

The first dropped out on one of the first days of training during the grueling Combat Endurance Test; so did 26 of her male classmates. The other female Lieutenant made it about one-third of the way through the course before being sidelined by a debilitating stress fracture in her leg. Neither is any indication that women are any less suitable than men for service in the infantry.

What is the basis for that bold statement, you ask?

It’s that, even for men, infantry officers represent less than 3 percent of all infantry troops – the vast majority are enlisted Marines, and their training is quite different.

It begins in the School of Infantry (SOI) taught in the Infantry Training Battalion with a week administrative in-processing and classroom instruction. The most strenuous physical activity? A 5 kilometer Conditioning Hike, which means a hike carrying their pack and weapons.

Week 2 is “Range Week”, where the Marines fire weapon systems such as the M249 Squad Automatic Weapon, (SAW, a light machinegun) the AT-4 Rocket Launcher, and M203 40mm grenade launcher.

“Long days, varying weather conditions, and a tough physical fitness schedule will teach your Marine how to deal with conditions similar to those faced in combat. The Company will spend the entire week sleeping in tents in the field and eating Meals Ready to Eat.”

That’s verbatim from the Infantry Training Battalion webpage, and while no piece of cake, it’s certainly nothing that most men and women can’t handle. The big strength test here? The ability to throw a grenade 20 meters. But guess what? Female Marines already do these as part of their training – officers in The Basic School (TBS, a six-month course of basic infantry and leadership training that all Marine officers, both male and female complete as their initial assignment) and female enlisted women in Marine Combat Training (MCT, a month-long course which every enlisted Marine who isn’t selected for infantry, regardless of gender, will attend.)  MCT, incidentally, is taught on the same bases as SOI, and in integrated companies of Marines where men and women train side-by-side.

Week 3 finds the Marines practicing patrolling and defensive tactics as well as how to effectively combat Improvised Explosive Devices being used in Iraq and Afghanistan. They will be sleeping in fighting positions, patrolling through swamps, and conducting ambushes in force-on-force training. The major physical event? A 10K Conditioning Hike. The rest is just moving through forests carrying weapons and gear, lying in ambush, etc – nothing that women aren’t already successfully doing in similar training events in MCT and TBS.

The next week culminates with the Common Skills Retention Exercise (CSRE), a grueling physical event that includes a 6 mile run and a 15km conditioning hike. Upon completion of the CSRE, Marines choose their infantry Military Occupational Specialty (MOS). The choices of MOS include: 0311 Infantryman, 0331 Machinegunner, 0341 Mortarman, 0351 Assaultman, or 0352 Anti-Tank Missileman. Mortars, Machineguns, and assault/missile specialists can incur heavy loads in the field – it’s usually big guys who will go for these weapons, and again, these specialized positions represent less than a quarter of the Corps’ infantry strength. The standard-issue 0311 Infantryman carries the M-16A2 rifle or M249 SAW – no different from the weapons that every female Marine will have carried throughout her basic training as an officer or enlisted Marine.

Another month will pass as the Marines learn to utilize their particular weapons in tactical situations, classroom instruction, and on ranges. There will be lots of moving around while carrying their gear, but the most grueling event will be a 20K Conditioning Hike – the same one made by every female officer who graduates TBS. There will be a 72-hour wargame, but again, this will be a familiar routine to all Marines who have undergone The Crucible (the culminating exercise in both Officer Candidate School and Boot Camp).

Compare this to the entry event at the Infantry Officer’s Course (IOC) – the elite school which those two female Lieutenants (and 24% of their male counterparts) failed to complete. Unlike the enlisted Infantry Course, which is designed to build Marines up into infantrymen, the first goal of IOC is to break down any officer who lacks an extreme degree of willpower, physical strength, endurance, and determination. The latter hints at one reason why the first batch of female officers might have dropped out early – even had they passed, they were not going to be allowed to serve as infantry officers. Every man running alongside them could tell themselves that whatever misery they were enduring was just an obstacle to overcome to earn the title of infantry officer – those female Lieutenants couldn’t even tell themselves that.

Here’s a taste of what the course entails – the officers are awake before 4 am, get dropped off in the middle of nowhere carrying rifle, a day pack, and a limited supply of food and water. Over the next 12 hours, the officers will be in near continuous motion, while being stressed out physically and mentally. They will swim, run, tread water, navigate with map and compass, perform pull-ups, push-ups, navigate an obstacle course, attempt to reassemble broken-down enemy weapons, and more. They will cover nearly twice as much ground as the enlisted infantryman does on his capstone exercise, the 20K endurance hike.

This is not a standard infantry-training event; it does not teach the officers anything they do not know – it is a test to determine if they are fit to lead Marines, and like several other types and phases of officer training, including Officer Candidate School and Naval Flight School, it is specifically designed to weed out a significant percentage of individuals who lack a specific aptitude. The method behind this madness? Thirty percent of officers graduating from TBS will request an infantry MOS as their first choice. That’s approximately 510 officers, and the Corps only has a need for about 350 Second Lieutenants to serve as infantry platoon commanders. The Combat Endurance Test and other make-or-break aspects of the IOC curriculum are designed to winnow the number of candidates down to the Corps’ requirements. Officers who fail out of the course or drop voluntarily will be reassigned to other key jobs within the Marine Corps.

Will female officers succeed in passing the Combat Endurance Test as it exists now? Maybe, maybe not. It’s worth noting that you don’t have to pass the Combat Endurance Test to be a great infantry officer – the course has only existed for the last 35 years, meaning that none of the storied officers of World War I, World War II, the Korean War, or Vietnam ever had to pass that particular test. Yet, somehow, they managed to lead their Marines to victory in battle.

But, even if no woman ever passes that test, it still doesn’t mean that female enlisted infantry can’t be built up at the Infantry Training Battalion in the same way that male enlisted infantry is now – through our current process that emphasizes building all inductees to a basic standard of fitness, tactical skill, and ability to employ their designated weapon.

Major Carpenter serves as the Executive Officer of Marine Aviation Logistics Squadron 40 at Camp Bastion, Afghanistan. The opinions expressed in this article are his own, and do not represent the official position of the Marine Corps, the Department of Defense, or the Government of the United States.

A Duck at Arms: Introducing Our First Military Correspondent