Can IR Theory Free this Student? 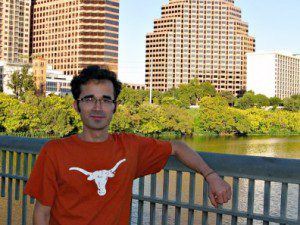 Omid Kokabee is a University of Texas PhD student from the Department of Physics who was arrested in 2011 when he returned home to Iran over the winter break to visit his family.

Though he is by all accounts apolitical, Omid was sentenced to 10 years for conspiring with foreign governments and given additional time in jail after he earned some money teaching other prisoners foreign languages and physics. His fellow students in the UT Physics Department have launched a campaign to try to free him. They asked my wife, also a political scientist, about what they should do.  Can we learn anything from international relations about how to free Omid? What do you think?

First off, we should probably acknowledge that IR theory won’t free Omid. Having said that, maybe something useful can come of what we know about social movements and human rights.

Second, there is a lot about Omid and his research that I don’t know. He studies laser optics, apparently not related to nuclear research, but what the hell do I know about the applicability of laser optics to military-related research? (One reason Omid is in jail may in fact be because he refused to apply his knowledge in ways the Iranian regime wanted).

Third, UT has not yet done a lot to try to help Omid, one of their own students. The UT president has been supportive, but the Board of Regents said the University couldn’t issue a statement and weigh in on such a political matter. To me, that’s an obvious hook for advocacy, but I’m perhaps getting ahead of myself. What can we learn from IR theory?

When Do Social Movements Succeed?
Ten years ago, Richard Price lamented in World Politics that we didn’t really have a good handle on this question. I think we’ve come a bit further since then.

I like this work, but it might be a tad vague. Yes, more resources would be nice, having a resonant frame would be fantastic, and sure it would be great to have really favorable political opportunities, but how can we know when these conditions have been met?

In terms of political opportunities, perhaps most important and most difficult for Omid’s case is the extent to which the target is or isn’t vulnerable.

Thinking About Target Vulnerability
Margaret Keck and Kathryn Sikkink in their foundational book Activists Beyond Borders say just a little bit about target vulnerability, suggesting states most susceptible to network pressures are those that “wish to belong to a normative community of nations” (29). Iran at this point hardly looks like it fits that bill.

External naming and shaming by the likes of groups like Amnesty International, might have an advantage in autocracies, as Hendrix and Wong argue in a forthcoming piece in the British Journal of Political Science, of making public that which is hidden and largely unknown. Making public human rights abuses, such as trumped up charges against a citizen like Omid Kokabee, might impose political costs on the regime as public perceptions change as abuses are brought light. How regime opponents or even insiders might make political hay out of a situation like this one is hard for me to see.

Keck and Sikkink also suggest that target actors may be vulnerable to material  leverage.  Indeed, one of the main findings of research on human rights from scholars like Emilie Hafner-Burton is that you can get some compliance pull to support human rights when tied to a source of material leverage like a trade agreement. However, sanctions have yet to bring the Iranian regime to the negotiating table on its nuclear program, and it is a fair bet that no country is going to be that exercised about a single Iranian national being imprisoned that it would impose additional sanctions on top of those that already exist.

The United States does not have significant trade relations with Iran, so negative inducements appear to be out. Indeed, run of the mill abuse of basic freedoms, like imprisoning a PhD student, is unlikely to trigger fears by leaders or their agents that they might be held legally liable for abuses, as they might be if they order or carry out the order to kill political prisoners (this mechanism is identifed by Jacqueline Demeritt in a recent article in International Interactions).

Framing and Normative Appeals
So, if advocates lack potent sources of leverage, what can they do?  Keck and Sikkink suggest that framing human rights issues in terms of threats to bodily harm have historically been successful, perhaps because there is some universal recognition that certain practices would be unacceptable if we ourselves were subject to them.

They elaborate by saying that a short causal chain that can clearly establish the relationship between the abuser and the subject is more likely to yield results. What this means in practice is unclear: is it merely that ease of identifying victim and cause helps establish culpability and thereby triggers universal outrage?

In this case, the organizers increasingly have emphasized that Omid is suffering from health problems, and perhaps there is something to be gained by appealing to some universalist notions along these lines. As important as universal appeals may be to generate external support for a cause, one of the main findings of the literature on framing in international relations is the importance of localized messages that resonate within the target state and local decision-makers (see my 2010 book as well Acharya, Sundstrom, among others).

What this means is that organizers need to imagine the conditions under which an internationally isolated Iranian regime would respond to messages from Americans to free one of its own citizens. The campaign has pointed to the successful efforts to free the Alaei brothers, two HIV researchers who were also imprisoned. Why they ultimately were released is a little unclear, but as one news report suggested, one brother credited his U.S. university for its support:

Alaei thanked officials at UAlbany who tirelessly pressed for the brothers’ release and joined Physicians for Human Rights in an international appeal that included rallies in dozens of cities around the world after the brothers’ imprisonment became a cause celebre among the global medical community and at international AIDS conferences they had previously attended.

One of the interesting local features that advocates for the Alaei brothers and Omid have emphasized is that the Iranian regime periodically shows leniency for first-time prisoners by letting them out early, sometimes in time with significant national festivals, like the upcoming March 21st celebration of the Iranian calendar year.

With this in mind, I thought it might be opportune for the international community to appeal for Omid’s release as an act of mercy in light of his medical issues and ask for his release by March 21st.

We Are All Omid
Finally, I was struck by what the University of Albany president said about one of the Alaei brothers in his statement of solidarity and how such a similar statement from the University of Texas president, if he was permitted to make one, might resonate (at least to audiences here at home):

Kamiar Alaei is a member of our university family, and when a family member is in trouble, it is our duty to do what we can to help.

So let’s try that frame out: Omid Kokabee is a member of our university family, and he’s in trouble and needs our help.

On the Word ‘Global’