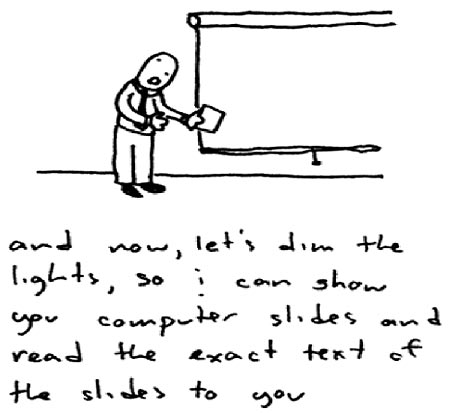 I was part of a short conversation last night about the standard job-search process in political science. For those of you who aren’t political scientists, but nonetheless feel compelled to read this, the process for junior candidates looks something like this:

At liberal arts colleges, of course, (1) the meeting with graduate students is replaced by (often multiple) meetings with undergraduates and (2) the research presentation is either supplemented or substituted with a teaching presentation to undergraduates. Telecommunications interviews may occur at any stage of the winnowing process. Some schools also conduct interviews at APSA. I don’t know much about the two-year college process. Otherwise, YMMV.

The rest of my comments will focus on the typical research-university process. Bottom line: it is a pretty terrible way to evaluate candidates. The worst part is the job talk, which is an extremely artificial exercise bearing little resemblance to most of the professional activity of political scientists. Contemporary justifications for this strange institution are, at best, rather strained. They include that it:

How important is the job talk? According to one grad-student advice message:

THE “JOB TALK” is perhaps the single most important thing you’ll do during an academic interview. On the basis of your presentation, you’ll be evaluated as a scholar, teacher and potential colleague. A dynamic talk is likely to result in a job offer, while a poorly organized, flat or uninspired presentation will almost certainly eliminate you from consideration.

In summary, the job talk is the most important part of the interview process. You were chosen for the interview because of your science and experience, so there is little reason to be very nervous. Practice your talk in front of your advisor, other faculty, and/or fellow fellows so that you can get direct feedback.

In fact, the job talk is most useful for… assessing the ability of a candidate to give a job talk. The reason we place so much weight on it * is that most academics (and I include myself in this category) are too pressed for time  to  carefully read candidates’ portfolios. And why should we? It isn’t like there’s a good chance that the person we hire will become lifetime colleagues… Doh!

I’ve heard rumors of other, more rationale systems. Some say that the University of Chicago conducts an intensive proseminar in which the candidate provides introductory remarks and then everyone discusses an article-length piece of research. This strikes me as a plausible alternative to the modal job talk.  But I ask our readers: are there others? And does anyone want to defend the status quo?

Principal Skinner’s job-talk advice
For more on academic job talks, see Steve Saideman’s October 2012 post. I can’t track down the source of the image, although the style looks familiar.

*This is not necessarily the case for senior job candidates, whose talks almost invariably stink (actually, most job talks stink, period). A fact that those who oppose the candidate will just happen to forget during hiring deliberations, and will therefore take as evidence that her accumulated record is irrelevant and/or that she wasn’t showing respect for the Department.
**The same column makes clear how mind-numbingly formulaic job talks are, e.g., “Job talks have a specific order.”