Torture as War Victory: My Hugely Unpopular Thesis about the ‘Real’ Agenda of Zero Dark Thirty 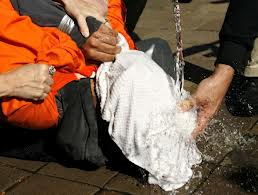 I have to confess, I was late to watch “Zero Dark Thirty” (ODT). I read a handful of reviews and blogs about the movie, had arguments with friends about its message, and even wrote it off completely–all weeks before I bothered to watch it. I wasn’t interested in watching another American war movie, nor was I keen to see the lengthy torture scenes I had read about in the reviews. I figured I already knew exactly what the content was (are there every any real surprises in American war movies? and, didn’t we all know how this story ended anyway?) and that there was really nothing left to say. BUT, I think there is something left to say about the film.

First, let’s all be honest: most of us walked away from this movie saying to ourselves “did I miss something?” What about the film deserved all the Oscar hype, debate, and acclaim? By most standards, this was a classic, boring American war movie. In this case, the lack of plot and acting skills are made up with using violent torture scenes rather than expensive battle scenes. There is no emotional journey, no big moral dilemma that the characters are going through (I’ll get to torture soon), little plot twist (again, we all know how it ends after all), and no unique or interesting characters (don’t get me started on Jessica Chastain–what exactly about her stone-faced performance warrants an Oscar? perhaps she deserves an award for for ‘most consistent blank expression’). So what gives? Is this just another “King’s Speech”? Meaning, is this just another big movie that people talk about and get behind, but no one actually can put their finger on what was remotely interesting about it (never mind what was destructive about it)?

So I’m calling it. Not only was this movie soul-less, boring and poorly made, everyone seemed to miss the message (and it is easy enough to do). The real question about ODT is not whether or not it is condoning torture. Although I agree with Zizek that the torture scenes were somewhat nonchalant, I think there was also some element of moral complexity to the torture scenes. The viewers were not spared from viewing what the brutality waterboarding, starvation, severe beatings, and isolation look like for detainees. I doubt anyone watched the film and felt that these techniques ‘weren’t that bad.’ Torture was made to look brutal, a relatively difficult tactic to pursue morally (shown through the main female character’s initial semi-struggle with it), ugly, and ultimately ineffective.

For me, the defining moment of the movie was during the first long torture scene. The main CIA male actor (with all the hair) who conducts most of the torture in the longer scenes says “this is what winning looks like” to the victim after a lengthy torture session.  That’s it folks. That’s the message this movie is trying to get across. Not that torture is easy, or legal, or fun–but that having control, being the one who is getting to call the shots, having the ability to use torture–even if it doesn’t work–is evidence of victory, power, and glory. This movie is about trying to seek out a new way to find some shred of dignity and glory as we look back on over a decade of ‘unconventional warfare.’

The wars in Iraq and Afghanistan are defined by many across the world by outrageous and unjustifiable civilian casualty stats, the use of torture, Guantanamo bay, Abu Ghraib, an image of soldiers urinating on corps, the wikileaks video of soldiers celebrating the killing of innocent civilians, and the total collapse of the economy as a direct result of the wars. This movie offers some relief from all the shame and negativity because it offers a counter-narrative: the US was in control (even when committing war crimes) and their domination in situations like torture and in killing Bin Laden–even after he was irrelevant–salvages the win. It asks viewers to overlook the ugliness and shame of the war on terror, and focus on the ‘ultimate’ victory–Bin Laden’s death. It reminds viewers that the goal after 9/11 was Bin Laden after all (clearly it is no coincidence that the movie begins with the emotional replaying of 911 calls from 9/11), and begs us to push aside the rest of the decade in order to get to the victorious end. America ‘won’–and this is what winning looks like. That sick uncomfortable feeling you have in your gut as you watch the torture scenes, or recall the photos from Abu Ghraib, or as you remember that Guantanamo is still open, should (according to the logic of the movie) be appeased through the knowledge that these are all the news signs of victory, not failure. The only credit director Katherine Bigelow deserves is that she added some subtlety to the message vis a vis great imagery, an attempt at a plot, and a female ‘heroine’ and didn’t directly jam the ‘torture as victory’ directly down our throats.

On the Word ‘Global’