Iraq 10 Years Later (2): What was the Neocon Theory behind the War? 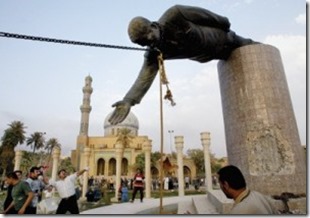 My first thoughts on the war’s ten year anniversary are here. There I asked if there was any defensible theory behind the war, anything that might explain why we launched it, because weapons of mass destruction were not really the reason. Paul Wolfowitz notoriously admitted they were just a pretext to rally the country behind the invasion. And it’s hard to argue it was about pre-emption either; Iraq was hardly a looming military threat in 2003. So here’s my guess about the real neoconservative logic. I should say up front, I do not endorse this rationale. I’m just trying to lay it out what I bet neocons were saying to each other in 2002:

The Iraq invasion was to serve two neocon purposes: 1) It was to be a demonstration strike against the Arab states. Islamist anti-western pathologies from the Middle East lead to 9/11, so the Iraq invasion was a warning to Arabs, and Muslims generally, to never to attack the US like that again. As Cheney put it in the film W, ‘don’t ever f— with us again.’ 2) It was to be a hammer strike to break the frozen, dysfunctional Arab political status quo which generated those pathologies; this would force the region toward democracy it would never attain on its own. This thinking was summarized in the widely used expression at the time, ‘drain the swamp.’

A lot of people will (and did) accuse the neocons of orientalism, racism, and US hegemonic arrogance. Nevertheless I’ve always thought this neocon argument was somewhat convincing to most Americans, especially the GOP. I’ve always thought it was the horribly botched execution of the war (the ‘fiasco’), not the idea itself of ‘draining the swamp,’ that cost the invasion American public opinion support. I also don’t think the neocon argument was ever properly made to the US public, probably because it sounds both orientalist and hubristic. This is not the sort of argument the Bush administration could make out loud; WMD was much easier to sell and far more direct, as Wolfowitz noted.

But I think if you read neocons like Kristol, Boot, Ferguson, Krauthammer, Gerecht, or Podhoretz, as well as high profile area experts like Thomas Friedman, Fareed Zakaria, or Bernard Lewis, or the right-wing thinks-tanks that supported the war (AEI, Heritage, Foundation for Defense of Democracies), this is what you heard. (For example: this, this, this, this, or this). I once participated in the FDDs’ terrorism fellowship program, and this was pretty much the line we got.

So you may not like the argument, but at least there is one. The war cannot just be dismissed as US imperialism, an oil grab, or a PNAC/neocon cabal, which I think was too often the default position on the left, especially in Europe, during the war. Opponents should rebut this and not just stick to deriding W the swaggering cowboy, fun as that may be. So I’ll try to write up the argument in neocon parlance:

“1. The anti-western pathologies that lead to 9/11 were Arab in origin, not Afghani. The perpetrators were not acting for a Taliban, Pashtun, or any meaningfully ‘Afghan’ reason. Al Qaeda only hid among the Taliban. Hence invading Afghanistan was not really a response to 9/11. That’s a key claim. Instead, that war was a ‘flushing out’ of these Arab jihadists from their only weakly affiliated hiding place. And it is pretty well known now that the Taliban became increasingly uncomfortable with al Qaeda. OBL and co. were drawing lots of global attention to Afghanistan, and the Taliban were not finished conquering the whole country in September 2001.

2. The Gulf at the time was a ‘swamp’ that needed to be ‘drained.’ [This neocon language is fairly loaded of course. Area experts would almost certainly call it ‘orientalism,’ because it makes sweeping judgments about Arabs based on thin cultural knowledge. But I think this is a fair rendering of the neocon conviction that Arab governance could only be reformed by an external shock.] The Middle East – at the time, long before Arab Spring – was simultaneously dysfunctional and paralyzed. Corruption, dictatorship, rentierist corporatism, repression, cultural insularity, and religious fundamentalism (veering toward fanaticism in Gulf especially) was a toxic brew, kicking up nasty radicals like OBL and Zawahiri. All the 9/11 hijackers were Arab, and 15 of them from Saudi Arabia alone, the most politically and theologically regressive Gulf tyranny.

The result of this reactionary status quo was intense social alienation, leading inevitably to extremism at the fringe, coupled with a manipulation of religion as the one trusted social institution left. As in the Soviet Union, the only meaningful civil society institution not wholly penetrated or corrupted by the repressive state and its secret police (mukhābarāt) was religion. In the Arab case (but curiously not the Soviet one), the political opposition therefore became ‘religion-ized’ – in this case, islamicized. The result was a corrupt, nasty, right-wing nationalist-corporatist state repressing an even more right-wing fundamentalist opposition with frighteningly medieval beliefs about women, Jews, homosexuals, and others. To contain salafism in the opposition and co-opt Islam for legitimacy purposes, a lot of cultural ground was ceded by the state to reactionary religious groups like the Muslim Brotherhood. Arab Islam was becoming both politicized and radicalized at the margins. Left and liberal alternatives, by contrast, had all but dried up since the 70s, leaving only a few western-trained liberals floating around places like the American University of Cairo.

And then 9/11 demonstrated that the salafist pathologies building up in the Middle East were spilling out of the region. The Arab political crisis was attaining a scary theological edge to it and now impacting non-Arabs.

3. These forces of dysfunction were too interlocked to change from within. The status quo was so set, that ‘waiting for the Arab ME to change on its own was like waiting for Godot – it will never happen,’ as I remember one commentator saying at the time. (Again this was long before Arab Spring surprised us all with the sudden explosion of popular, not immediately Islamic fundamentalist, energy in the wider population.) Aid, diplomacy, US soft power, and other tools were not enough to challenge this congealed swamp of dysfunction. Hence the only way to change the Arab status quo that had given us Islamic fundamentalism and its extreme fringe in binladenism, was a ‘hammer strike’ or ‘lightning blow,’ ideally in the very heart of the Middle East – an invasion somewhere. Given that Saddam was already an established troublemaker who’d hung on far too long, and that Iraq was a large Arab state right in the center of the ME, and that we couldn’t invade Saudi Arabia because we were so dependent on their oil, or Egypt because they were an ally, Iraq was a good choice.

In months and years after Iraq, I remember lots of students saying that this neocon analysis actually suggests that we should have invaded Saudi Arabia. Al Qaeda was had its roots there; OBL and 80% of the hijackers were from there; and the flat-earth, petrodollar-fueled Saudi clerical establishment is the purveyor of ultraconservative Wahabbism. One might also suggest Egypt, as the largest Arab state, the traditional center of Arab learning, and the birthplace of Sayyad Qutb and the Muslim Brotherhood. But for obvious reasons, these targets were off-limits. That left Iraq. (Iran was too big, and Persian.)

Only a massive ‘shock and awe’ event could disrupt this deeply-entrenched Arab political paralysis that was also breeding radicals in the shadows. The goal was not to make Iraq into full-blown western democracy – even neocons knew that was too ambitious. But this hammer strike would push a major Arab state onto a radically new, more liberal, more democratic course. Even if Iraq didn’t turn out to be Canada, if it ended up like Turkey, that would be a big step forward, and show that Arab states could be politically pluralist.

4) The war then was to provide an unmistakable demonstration effect throughout the ME, and the world. As Rumsfeld might say, if you tangle with the US, like on 9/11, we will kick the hell out of you. The war was (supposed) to be a demonstration strike telling governments everywhere, but especially in Muslim states, to change, quickly: crack down on terrorists in your own house and start liberalizing to defuse the pathologies driving the jihadists, or the US will come after you next. Lest we forget, at the time, the Bush administration was considering attacking other countries after Iraq  And this macho American a—kicking mentality fit perfectly with Bush’s you’re-with-us-or-with-the-terrorists mindset on the GWoT.”

Again, I don’t endorse this logic. Among other problems, it conveniently sidesteps American provocations in the region and makes sweeping, culturally controversial judgments about Arabs. But I think it needs to be out there. Particularly Middle East area experts’ commentary would be most valuable on this.

My next post will be on why I think this argument failed.