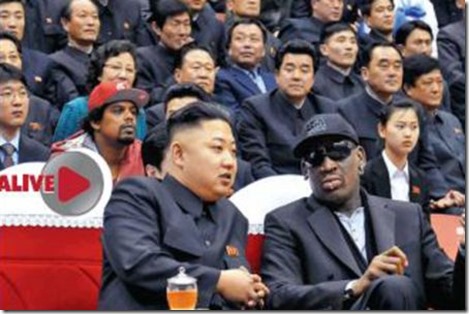 Studying North Korea inevitably means people ask me pretty outlandish stuff. People have asked, if the North really believes long hair is bad for socialism, if that goiter on Kim Il Sung’s neck made him crazy, if Kim Jong Il’s platform shoes meant that he liked disco, and if North Korean women are good looking because a food shortage would mean everyone is slim. (I presume that last one is a reaction to the obesity epidemic in the US.) So I tried to avoid this latest outbreak of Norko bizarreness with Rodman. But people keep asking me, so here a few thoughts to the effect that no one should shill for North Korea – ever.

Call it yet another chapter in the history of clueless foreigners getting lost in and manipulated by North Korea – Lenin’s ‘useful idiots’ from the West who defended the Soviet experiment. Who knows what to make of that utterly weird photograph of Rodman in bling and Kim Jong Un dressed like Mao. There are so many contradictions in there, it’s not even worth unpacking.

But I will say that it would sure be nice if foreigners who have no idea what they’re doing in NK would stop using it for self-promotion, and stop toadying to get their visa renewed. That would include not just Rodman but Eric Schmidt, Parag Khanna, Euna Lee and Laura Ling. Same goes for all these wannabe Christian missionaries who wander in and get caught, and then have to get fished out by Bill Clinton. Their freedom is inevitably at the cost of some back-room deal and pay-off to the North Korean elite: shaking down outsiders for cash, premium booze and smokes, and car parts is a well-established North Korean tradition. Let’s stop handing the North hostages to play as cards in brinksmanship.

There are two obvious problems with these sorts of trips:

1. Lest it need to be repeated – and I can’t imagine anyone wouldn’t know this – NK is a hellhole, and any credibility you lend to it with your reputation is immoral. So don’t write articles about how NK is not so bad after all. Don’t put some kind of positive spin on the leadership as actually technocratic, developmentalist, East Asianist, ‘focused on the future,’ etc. Don’t suggest that NK is ‘actually doing a pretty job job defending Korean identity’ while the South is a globalized multiculture. Don’t say ‘Kim Il Sung may have been a despot, but at least he: …built the Pyongyang subway/fought the Japanese/redistributed farmland/loved his wife/gave everyone free health care/genuinely believed in communism/etc.’ I’ve heard all that and more.

Some of this may be true; others not. But all of it blurs the issue or changes the subject by implicitly excusing NK awfulness. The issue that should drown out all others in dealing with NK is a human rights record worse than the Taliban. No discussion of NK should leave out this point – which I tried to argue a few weeks ago at CSIS-USC.

I hear similar talk in SK all the time. ‘Well, Park Chung-Hee overthrew the constitution, but he made us rich, so he’s pretty great.’ Or ‘Park Chung Hee’s wife may have abetted dictatorship, but she loved her family, so she wasn’t so bad.’ Hitler built the autobahn and was a stickler for dental care, but so what? Enough toadying.

And in the case of NK, the awfulness is SO awful, that it really should overshadow everything else.

2. North Korea desperately, desperately needs international recognition, so every time some western celebrity goes there, the regime manipulates it. The KCNA coverage – or so I heard, because I can’t actually get it in SK, because the national security law blocks it – portrayed Rodman as a supplicant coming to KJU, who ‘graciously’ took him to a game.

As BR Myers has argued, this idea that foreigners come a-begging to Pyongyang is actually pretty important for the regime. It suggests to the NK population that even though they are poor, others see NK as a some kind of great place they love to visit, or as your NK guide will tell you, “the whole world knows we Koreans are best!” And of course, the Kims graciously accept these benighted outsiders and share the light of juche with them. This is why whenever a US delegation has to go to NK to get out an American, the North always insists on a picture with Northern leaders. It helps legitimize the regime and suggest the benevolence of the Kims. At least Bill Clinton knew to look mildly pissed off in his photo, while Rodman called KJU a ‘friend for life.’ Good christ!

In short, Rodman should just be quiet. KJU is not his friend for life; it’s highly unlikely they’ll even meet ever again. Given that no one’s heard from Rodman in years, he may have done this just as a publicity stunt, just like Ling and Lee also traded on their experience to get gigs. Visiting North Korea is morally defensible (although a big debate rages about that). I’ve done it, and I would recommend it to others. But the right approach of travellers to NK is moral distance: say as little as necessary, only bow when you absolutely must (which is only once), and never, ever indulge their craving for respect.

Rodrik’s Paradox is No Paradox