It is with great sadness that I have to report that Ken Waltz died last night.  As many of you know, his health had been uncertain ever since he lost much of his sight a year ago, and about a month ago he was hospitalized with pneumonia.  While he recovered enough to be discharged to rehab, a combination of a return of pneumonia and congestive heart failure sent him back to the hospital a few days ago.

He was a few weeks short of 89 but until the very end remained fully lucid and engaged. Indeed he was looking forward to a trip to the UK with his daughter-in-law in the fall, and the day before he went into the hospital had lunch with Les Gelb & Henry Kissinger (& remarked that the latter’s age was showing).  Despite being unable to see well enough to read, his spirits remained high until the end, which came quickly.

We will all miss him greatly both for his scholarship & his personality.

Waltz was a giant in the field. His two most important works — Man, The State, and War and Theory of International Politics — provided the framework within, and against, international-relations scholars have argued for much of the post-WWII period.

Whatever one thinks of structural realism and its progeny, Waltz got some big things right, including the dangers of military intervention on behalf of ideological crusades. He also wrote the pithiest “correspondence” piece ever likely to appear in International Security. 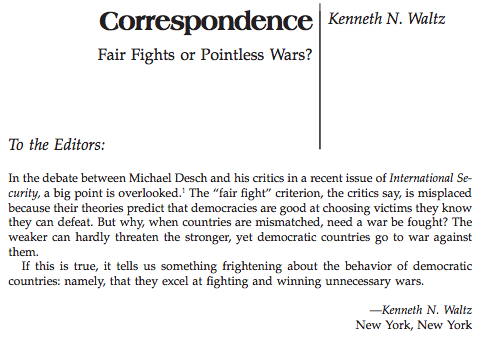 I didn’t know Waltz well. I took his seminar when he taught at Columbia. I found him engaging, supportive, thoughtful, and open to a wide variety of perspectives and ideas. He was kind enough to write one of my job-market letters of recommendations, for which I will always be grateful.

He spent some of his last months in an assisted-living facility in the DC area. His eyesight was failing. He apparently found it quite boring; so graduate students, including one from Georgetown, read articles to him.

A final  anecdote. . Waltz began his doctoral studies (at Columbia) as a political theorist, but switched to International Relations. In those days, students didn’t present their dissertation proposals. Instead, their advisors did.

Waltz’s advisor, William T.R. Fox, therefore brought the thesis proposal that would become Man, the State, and War before a committee of professors. The general response? No one really understood what Waltz was doing, but, they agreed, he was a smart guy; they should just let him pursue it.

Thanks to Stacie Goddard for providing the following confirmation  from Ken’s obituary for Bill Fox in PS. As she notes, the story is even better than she and I remembered it. For a remembrance from one of his actual advisees, see Steve Walt’s heartfelt post. 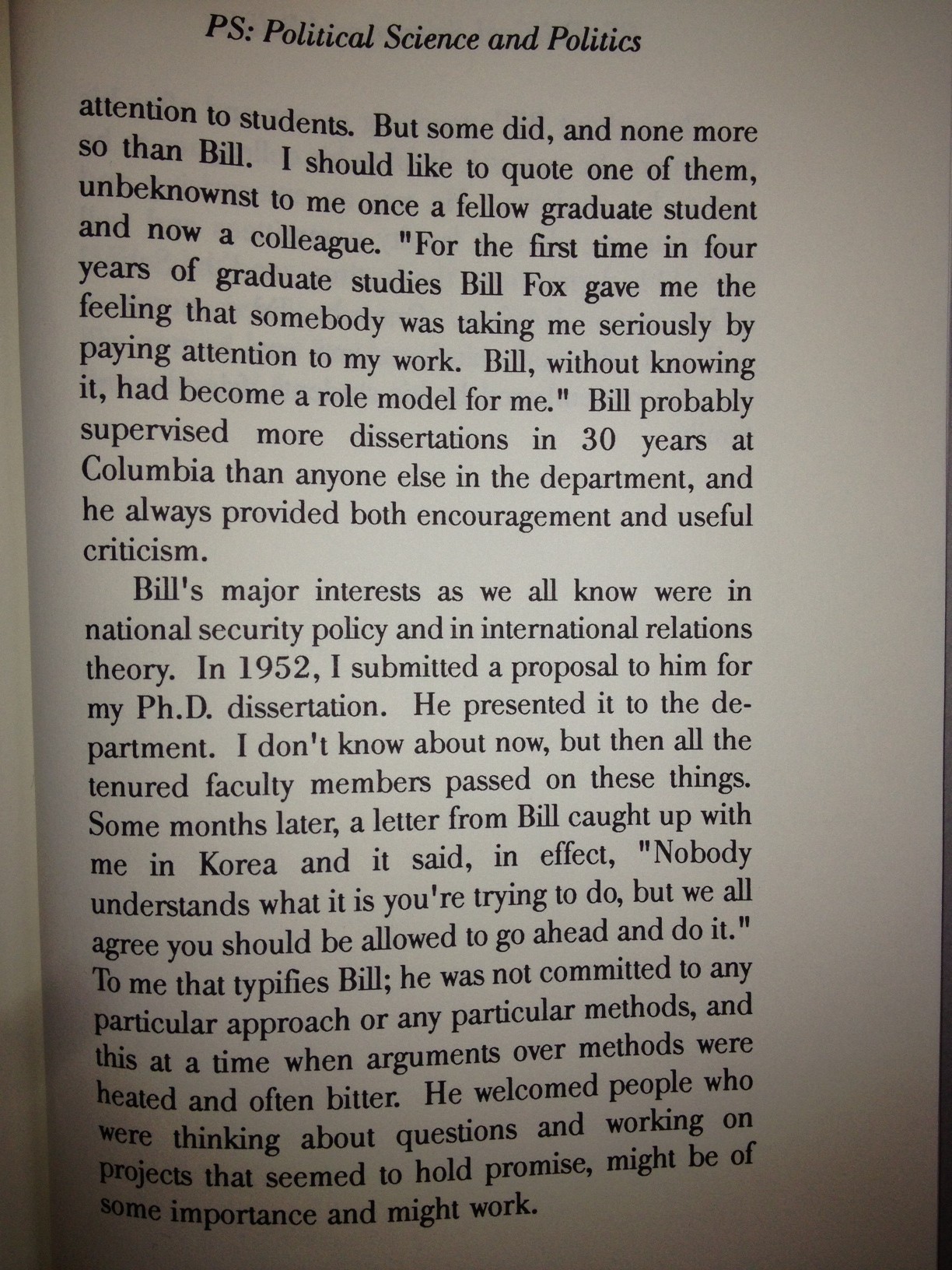