Was Kaesong a Hole in the Korean Iron Curtain, or a Subsidy to the Kim Monarchy? 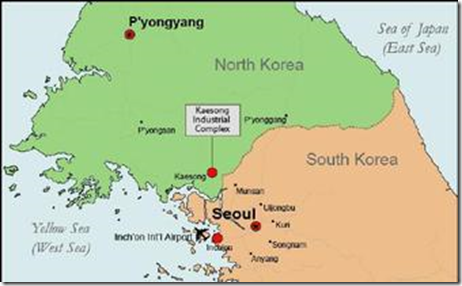 So it increasingly looks like the inter-Korean Kaesong industrial zone is closed for good. (The Wikipedia write-up is a pretty good quick history of it.)

The zone was set-up during the Sunshine Policy period (1998-2007). It was to do 3 things: 1) Lead to some liberal-capitalist spill-over in the North, 2) Expose regular North Koreans (the workers in the area) to regular South Koreans (the managers and staff), and 3) Generally provide some inter-Korean cooperation that might hopefully reduce larger tensions. A resort area in North Korea (Mt. Kumgang) was also opened along these lines in the Sunshine period. Broadly the idea was along the lines of liberal explanations for the Soviet Union’s changes in the 1980s: the Helsinki Accords and CSCE opened the USSR to the outside world, and the inflowing liberalism slowly changed attitudes that eventually helped wind-down the Cold War. Unfortunately, none of this seems to working in the NK case.

Kumgang got closed after a SK tourist was shot in 2008 by NK guards. Kaesong has been a geopolitical football for years. Neither seemed to lead to much spill-over. Instead, NK basically sealed off both facilities entirely, managing them as enclave economies with tight controls. No capitalist-liberalizing influences seemed to be allowed to spread. No semi-private NK industries have sprung up around the Kaesong zone, e.g. The people who work in these areas are checked and proofed by the NK government. Nor did the zone seem to cool tensions; instead Kaesong would get instrumentalized in those tensions – as in this current crisis.

It is true that there are lots of private grey markets in NK, especially in the north. But that comes from the semi-legal-but-tolerated interactions with China and border merchants, not from Kaesong/Kumgang. Causality of NK partial marketization is obviously really hard to track here – I suppose it could be from Kaesong – but I think the analyst community would disagree and say NK black/grey markets sprung up as a desperation measure to cope with the famine of the 1990s, and the state has been unwilling or unable, or both, to crack down.

Finally, it is unknowable how much psychological liberalization there has been; that is, whether the everyday exposure and interaction of North and South Koreans has created a ‘gestalt shift’ in those North Koreans regarding South Korea. Ideally, these changed North Koreans would then tell their family and friends, and one might see some moderation in NK bubbling up from below over the years to come. Andrei Lankov particularly is well-known for making this sort of argument for long-term change in NK.

My own sense from talking to South Koreans is disappointment over the near-closure. Kaesong seemed to suggest that the Koreas could get along, that NK could be nice and open at least a little, that NK didn’t have to be fearsome and terrifying all the time, and so on. One hears this touching anecdote a lot: North Korean workers in Kaesong would save their snack cookies (choco pies) from the SK managers and trade them on the black market at home. There is fear in the South that closing Kaesong means the loss of the last shreds of Sunshine Policy cooperation/inter-action.

On the other hand, it needs to be noted that the SK companies that operated in Kaesong and Kumgang paid the North Korean government, not the NK staff, and paid them in US dollars. The staff were paid later in all-but-worthless NK won and coupons. So effectively, Kaesong and Kumgang became a big, easy cash-cow subsidy for the hard currency-starved North. As it became increasingly obvious that neither zone was leading to spill-over liberalization or tension-reduction, SK conservatives increasingly turned against these zones as little more than subsidies for the Pyongyang ‘court economy.’ These dollars allowed the Kims and cronies to get foreign liquor, HDTVs, cigarettes, appliances, etc., despite the sanctions.

I’m not sure which interpretation is correct; I tilt toward the right probably. Given how little the hoped-for benefits from Kaesong actually showed-up, it’s hard at this point not to see it as just a subsidy to the degenerate clique that’s impoverished the whole country while living well on sanction-busting. Like the Sunshine Policy, I think Kaesong was a worth a try. Just about anything that might encourage change in NK is worth a try at this point; we should not be precious or ideological with a regime that is so dangerous. At the the time, we just didn’t know how the North would respond, so it was worth a real effort.

That said, I think it also needs to be admitted after awhile, that these policies in fact failed. My left-progressive students tell me that 10 years was not enough for the Sunshine Policy and Kaesong; that NK needs more time to come around; that hawks like me and all those American-influenced SK think-tanks in Seoul make NK permanently paranoid, so 10 years is too short. Maybe; I guess that’s possible. But 10 years is a long time for SK to be the sucker in the PD-game with NK. It’s hard to miss that SK was also effectively subsidizing NK in those years and getting very little in return. I dunno. It’s a tough dilemma.

Arms transfers to Africa: Hold the phone!….China is the good guy?