Abenomics is Not more Dangerous than the North Korean Missile Program 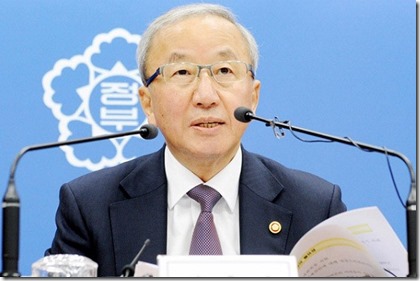 I continue to be amazed at how the Korean government won’t admit that Japan’s revival is really good for democracy in Asia and the prevention of Chinese regional primacy. No less than the SK finance minister (pic) actually said Abenomics is more dangerous to SK than the NK missile program. Wait, what?? The worst totalitarianism in history gets a pass when the Bank of Japan prints a lot of cheap money? Come on. That’s unbelievably irresponsible. Are Korean officials so deeply bought by the chaebol that they actually have to say stuff like that? Honestly if Minister Hyun really believes that (I doubt that though, see below), he should probably resign. This is just an embarrassment.

This was originally published in the Diplomat, so the style is op-ed-ish.

“Gaffes by officials of the Park Geun-Hye administration are emerging as a major issue in South Korean (SK) politics. Many of these have been personal, such as the sexual harassment claim lodged against a presidential aid during a trip to the United States. The opposition enjoys touting these as markers that Park is unprepared to be president. But the most politically revelatory mis-step for non-Koreans has received little attention so far: Finance Minister Hyun Oh Seok recently commented that Abenomics’ impact on SK export competitiveness is a greater danger to SK than the North Korean (NK) missile program. This deeply disturbing commentary, from such a high official, deserves to be unpacked for a non-Korean audience for the multiple Korean political dysfunctions it manages to illustrate in just a few sentences. Four points leap out:

First, there is the staggering blitheness toward NK and the threat it represents to the South, the region, and perhaps even North America, not to mention the real victims of NK orwellianism – the North Koreans themselves. Nor is it admitted that the expensive, investor-deterring stand-off with NK obviously does far more medium- and long-term damage to SK’s economy than the ups-and-downs of the FX market. That NK and its rapidly accelerating missile program, which just generated a major global crisis this spring, would be ranked a danger below reduced exports is shocking myopia. Such servility before politically-influential exporters is an insult to the SK military, the North Koreans suffering such terrible hardship, and to the many foreign states, most obviously the United States, who have pledged to help SK against the North. Elsewhere I have argued that SK takes the US security guarantee too much for granted, and this is a fine example. It is impossible to imagine a SK minister saying something like this narrow were SK handling NK alone. National security shortsightedness that places Samsung’s TV sales over NK’s missile threat is both laughable and terrifying.

Second, there is the unseemly, miserly japanobia (for lack of a better word) that makes it all but impossible for Korea to work with Japan, despite both shared geopolitical logics and liberal democratic values. Korea’s post-colonial resentment of Japan is well-known and understandable. Japan’s treatment of Korea was harsh and included an effort, not well-known in the West, to eliminate the language and culture as distinct identities. And Japan’s refusal to come clean on the war and its imperial brutality is genuinely immoral and infantile. That said, japanobia is a genuinely irrational and self-defeating paranoia in Korea that is shamelessly manipulated by the government. (I have written extensively about this, for both communities, here.)

Contrary to the minister’s assertion, it is well-known that Abenomics is not, in fact, a beggar-thy-neighbor gimmick, but a desperate, last-ditch, try-anything attempt to revive a systemically important economy stuck in stagnation for a quarter century. This is why just about everyone outside of Asia supports it – the IMF, the US, the Economist, the Financial Times, even the Germans. Yes, there is the lurking possibility of competitive devaluation in Abenomics, but the situation in Japan is so dire, that everyone is also willing to give Japan great irregular leeway to try to find any way to get back to growth.

Further, a growing Japan is in fact in Korea’s medium- and long-term interest. A strong Japan is the central regional obstacle to Chinese primacy, which would hardly suit SK. Japan helps contain NK. Japan and SK share core political values of democracy, liberalism, and commitment to human rights. And South Koreans broadly anticipate, although it remains somewhat unspoken, that Japan will kick in substantially to pay for Korea’s unification costs as a historic compensation for its imperialism. A flailing Japan cannot do that. In this context, Hyun’s opposition to Abenomics is raw selfishness, fueled by anti-Japanese loathing that is simply unworthy of a G-20 state with pretension to a major role in global governance. As the third largest economy in the world, Japan’s improvement is a global, systemic importance. Japan’s reflation would be good not only for it, but for the region, and even the globe. Minister Hyun almost certainly knows this.

Third, the mercantilism of the interview – that Korea must run a trade surplus no matter what, at all times – is astonishingly selfish and short-sighted. The imbalances which piled up between the US and China, or between Northern and Southern Europe, and feed the Great Recession, should be a wake-up call to mercantilists everywhere (including Germany, Japan, and China as well) that permanent surpluses are simply unsustainable. They generate trade friction; they stoke a political backlash; they are fundamentally predatory, because a trade surplus in one state mathematically implies a deficit in another. As the FT’s Martin Wolf has been saying for years, global balances must sum to zero (duh), and as President Obama said, the US cannot be the importer of last resort forever. Deficit states must be given an opportunity to work off those deficits, or they will revolt, as Greece has, threatening the political stability of the trading system as a whole. Demand must come from somewhere in the trading system, and in the interest of global fairness and exchange rate equilibrium, yesterday’s deficit states should be tomorrow’s surplus states. That Asian trading states game this system and relentlessly insist on running semi-permanent trade surpluses – come hell or high water and using monetary gimmicks to politically engineer an outcome the market would not otherwise produce – is hugely destabilizing and painfully unfair. Again, Minister Hyun almost certainly knows this too.

Finally, the shilling, by no less than the finance minister, for the exports of Korea’s largest companies, who are well-known to have deep, corrupting influence on Korean politics, is just embarrassing. A long-standing criticism of Korean political economy is the ‘capture’ of the state by the mega-exporters, the chaebol. But rarely is there such an obvious smoking gun of the toadying corporate money and influence can wring out of policy-makers. In the five years I have lived in Korea, I cannot recall anything like a figure this high up in the government so cravenly hawking the narrow interests of Korean exporters, at the G-20 level no less. That Korea’s consumers, who carry the highest debt-to-income ratio (155%) in the OECD, would significantly benefit from a stronger won is ignored. That Korea’s currency is 15-20% undervalued – sanitized on behalf of the chaebol export sales, of course – is also ignored. A much stronger won is in the interest of many sectors in Korea, but I guess they do not matter when the chaebol ring up the Blue House. Why not just make a chaebol CEO the finance minister?

Unfortunately, this is the scandal-that-wasn’t in Korea because of the far-reaching, hugely corrupting influence of its mega-corporations. Even national security can get shoved to the back burner when the chaebol are upset, and no one objects. Ironically, I doubt Minister Hyun personally believes what he said. He was probably pushed into it, because the chaebol and Korea’s conservative elites are all but an indistinguishable oligarchy now. But that, of course, is the problem, and this is an embarrassing smoking gun that Korea, Inc. trumps the interests of the Korean public.“

Does Snowden Pass the Test?