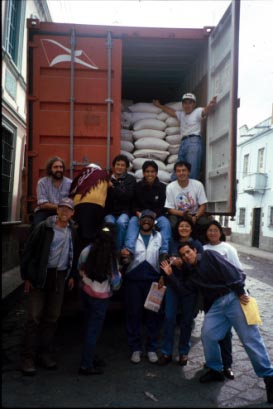 Is There a Right Way to Do Development?

In our newish MA program in Global Policy Studies, it turns out “International Development” is the most popular concentration. Now, many of our students who are interested in this “specialization” have what I call a distinct project-based approach to development. They think of international development as projects foreigners go out and do. Since most of our students are from the United States, they envision themselves doing development the same way I did as a Peace Corps Volunteer in Ecuador where I served from 1997-1999 (the photo above is of a quinoa export project I worked on with some great people; it’s a little dark but I’m the guy in the front left with the ball cap). This vision of development is you the foreigner go out to some rural area and you help the locals.

It’s been much derided in contemporary international development circles, most notably in Bill Easterly’s work White Man’s Burden: Why the West’s Efforts to Aid the Rest Have Done So Much Ill and So Little Good. Easterly’s work is a specific indictment of foreign aid rather than micro project-based development, but the two are related. Easterly clearly is of the macro school of getting the foundations of the economy and governance right, but there has been a whole revolution in economics over the past half-decade with a fascination for randomized controlled trials (RCTs) that has made micro-level project-based international development even sexier to our incoming students, some of whom have gone on to work for these outfits like J-PAL (Poverty Action Lab) and Innovations for Poverty Action. I find all this micro stuff fascinating and hopeful, but I worry about what I call the “islands of goodness problem.” Let me explain.

Grassroots development projects like mine might have been successful, but the problem as I saw it was the wider governance of Ecuador. During my time there, Ecuador witnessed periodic economic and political crises, paralyzing strikes that closed roads (and commerce) for days on end. Between 1996 and 2000, Ecuador had five presidents, their tenures punctuated by political crises, scandals, and bloodless coups. So, while my project might have been reasonably successful, what I was doing on the micro-level was swamped by what was happening at the national level. While projects like mine might have been fostering “islands of goodness,” Ecuador’s trajectory during my service was largely stagnant or downward.

As a result, I’ve come to the conclusion that development has to start with getting the macro piece right. Put a little differently, for all the Paul Farmers in Haiti even operating at scale, unless Haiti gets its governance piece in shape, those local efforts will constitute fragments of better development practice that will be susceptible to the negative trends at the country level. That said, once you do get the macro elements right, knowing what works at the project level is absolutely important. 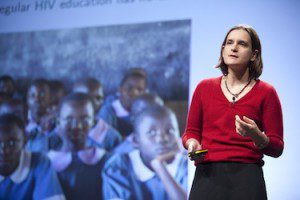 Berkeley’s Pranab Bardhan had an incisive review a couple of weeks back of four books on development that echoes some of these themes. Two of the books he reviewed were drawn from the micro/randomistas school (including the Banerjee/Duflo book Poor Economics) and two from the more macro approach (including the Acemoglu and Robinson book Why Nations Fail).

I thought Bardhan hit on some of the most important weaknesses of the various approaches. With respect to the micro side of things, he identified a number of important critiques of the new development fad for randomized control trials. Perhaps most important among them is related to generalizability:

Second, RCTs face serious challenges to their generalizability or “external validity.” Because an intervention is examined in a microcosm of a purposively selected population, and not usually in a randomly sampled population for any region, the results do not generalize beyond the boundaries of the study. For all their internal flaws, the older statistical studies, often based on regional samples, permitted more generalizable conclusions. Neither method has a monopoly on correctness.

On this point, I was struck by a March 2013 Bold et al. paper  for the Center for Global Development that looked at the effects of rolling out an intervention into the Kenyan educational system at scale. In India, that intervention on a micro-scale had raised test scores. In Western Kenya, it did not, leading the authors to conclude that:

What the authors found is that when you hired contract teachers through an NGO, the contract teachers helped reduce class sizes and these for-hire teachers’ incentives for good performance led them to help improve student test scores. However, when the same contract program was carried out by the government at scale, the teachers’ unions organized to try to make these new workers more like existing teachers. The expectation that these contract jobs would become permanent government employee positions, largely protected from hiring/firing procedures, reduced the performance incentives for these teachers. As a result, this program did not have a measurable impact on student test scores.

While RCTs can be used as a way to inform government practice, the CGD working paper alerts us to the challenges of implementation at scale, and the political economy considerations that implementers must be aware of. This is of course not a new lesson. The experience of structural adjustment and privatization in the 1990s and 2000s also taught a generation of economists that theoretically valid ideas might not be implemented exactly as planned and that practices that worked in one region might not travel that well to other domains.

It’s also clear from this study that improvements in government educational system performance are crucial to the future of outcomes for most students. International NGOs control a paltry fraction of the total funding for primary education:

I also think that this observation links back to my skepticism of project-based development assistance. When I think about the incredible transformations in China and India that have lifted millions out of poverty, I see very little of that having to do with efforts by Western do-gooders at the micro-level. It had more to do with structural transformations at the top that then allowed local actors to live up to their potential (with some obvious downsides of course in terms of pollution and rising inequality).

That’s not to say there isn’t a place for international assistance. I’ve been particularly effusive in support of interventions in the health space, such as the programs to support HIV/AIDS treatment. However, for more generalized economic development, the transformations that we’re looking for start for me with ending civil wars, getting the fundamental of macroeconomic governance right, developing inclusive political institutions, and then seeing what international political economy obstacles stand in the way (like trade barriers, unjust patent laws, limits on migration).

Maybe I’m still looking for a simple narrative when the story is more complex. For you development types, I’d welcome your thoughts.