In the Guardian this morning, Christof Heyns very neatly articulates  some of the legal arguments with allowing machines the ability to target human beings autonomously – whether they can distinguish civilians and combatants, make qualitative judgments, be held responsible for war crimes. But after going through this back and forth, Heyns then appears to reframe the debate entirely away from the law and into the realm of morality:

The overriding question of principle, however, is whether machines should be permitted to decide whether human beings live or die.

But this “question of principle” is actually a legal argument itself, as Human Rights Watch pointed out last November in its report Losing Humanity (p. 34): that the entire idea of out-sourcing killing decisions to machine is morally offensive, frightening, even repulsive, to many people, regardless of utilitarian arguments to the contrary:

Both experts and laypeople have an expressed a range of strong opinions
about whether or not fully autonomous machines should be given the power to deliver
lethal force without human supervision. While there is no consensus, there is certainly a
large number for whom the idea is shocking and unacceptable. States should take their
perspective into account when determining the dictates of public conscience.

The legal basis for this claim is the Martens’ Clause of the Hague Conventions, which argues that the means of warfare be regulated according to the “principles of humanity” and the “dictates of the public conscience” even in the absence of previously codified treaty rules rendering a weapon or a practice unlawful. The Martens’ clause, inserted into the Hague Conventions as sort of a back-up clause for situations not foreseen by the drafters, reads:

” Until a more complete code of the laws of war is issued, the High Contracting Parties think it right to declare that in cases not included in the Regulations adopted by them, populations and belligerents remain under the protection and empire of the principles of international law, as they result from the usages established between civilized nations, from the laws of humanity and the requirements of the public conscience. “

Now, previously I posted some quantitative survey data suggesting there is indeed widespread and bipartisan public opposition in the US to the idea of machines killing humans. But what can a qualitative analysis of open-ended survey answers tell us about the nature of that opposition? Does public opposition to the weapons include a sense of “shock” or concern over matters of “conscience”?

An initial qualitative break-down of 500 respondents’ open-ended comments explaining their feelings suggests the answer may be yes. The visualization below is a frequency distribution of codes used to sort open-ended responses by the 55% of respondents who “somewhat” or “strongly” opposed autonomous weapons, along with some representative quotations that illustrate how the codes were applied. 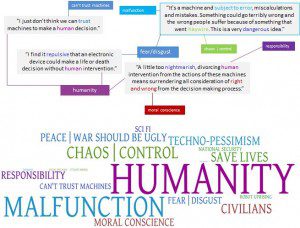 1) This survey captures US public opinion only. It is likely that by “dictates of the public conscience” diplomats were referring to global public opinion, so this study would be most useful if replicated in other country settings. Still, to the extent that US policymakers are making decisions about development of autonomous weapons or their position with respect to an international ban movement, they are required under international law to take US public opinion into account.

2) This is a preliminary cut at coding, and the results may change as the rest of the data-set is annotated more rigorously. But even this initial cut at the raw data illustrates the ways some Americans describe their intuitive concern over autonomous weapons. There is certainly an “ugh” factor among many respondents. There is a concern about machine “morality” and reference to a putative warrior ethic that requires lethal decision-making power to be constrained by human judgment. But primarily, there is a sense of “human nationalism,” whether rational or not: the notion that at a moral level certain types of acts simply belong in the hands of humans, that outsourcing death is “just wrong.”