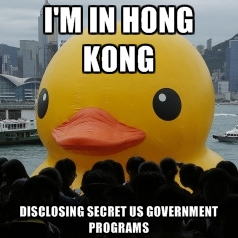 Jeffrey Toobin’s “Edward Snowden is no Hero” has generated some very sprited debate in my Facebook circles. Most of my online interlocutors fall into the left civil-libertarian camp, so readers might imagine their consensus view of Snowden’s action. I’m much less sanguine. I take the ethical, moral, and legal obligations of holding a high-level security clearance very seriously. You better have a damn good reason for violating those obligations, and it isn’t at all clear to me that disclosing a legal intelligence-gathering program subject to active congressional oversight crosses that threshold. And if you are going to declare, in essence, “Here I stand. I can do no other,” then you don’t make your stand from a country that — regardless of its civil-liberties statutes — is under the jurisdiction of the PRC security services. That betrays a certain degree of reckless disregard for your own safety and that of the knowledge that you carry.

David Brooks, on the other hand, needs to take a very long holiday from the New York Time’s editorial pages. Here’s some other idiocy that, despite the reservations expressed above, I in no way condone.

Linking of Paul Campos, if you haven’t read his “The Lessons of the Megalomaniac University President,” then do so. Right now. One of the other big academia stories right now involves the philosophy of sexual harassment (PDF). Or, more accurately, the philosopher and sexual harassment? A number of people aren’t exactly covering themselves in glory on this one, but they are encouraging others to produce first-rate snark.

But back to the imminent panopticon. Daniel Little doesn’t like it. Not one bit. Nor does Tim Burke. Both have super-intelligent things to say on the subject.

Speaking of surveillance…. anyone following MERS? This is apparently a very worrisome time on the pandemic front. So I recommend dealing with anxiety through the ironic lens of playing the board game.

There’s plenty of other stuff worth your while. For example, Lane Kentworthy rejects the notion that the US can’t have nice (social democratic) things (via). SocProf discusses In the Flesh. But that’s enough for now.