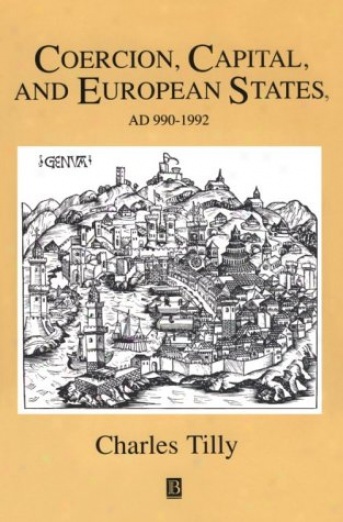 A few unconnected recent happenings have reminded me that I’ve meant to do a short post on Charles Tilly, bellocentric (or “bellicist”) theories of state formation, and where all of this stands in 2013.

If you mention “Charles Tilly” and “state formation” to knowledgeable social scientists, their first association is almost always his famous line “war made the state and the state made war” (PDF). Scholars most frequently cite his work on state formation in the service of this line of argument.* Indeed, Tilly’s argument also invariably gets translated into “more war, more state.”

This strikes me as a plausible reading of Tilly’s early work on the subject, but not of Coercion, Capital, and European States, AD 990-1990 — let alone his later scholarship. Moreover, I contend that even if Tilly does make something akin to that argument, it isn’t what we should take away from it.

What does Tilly argue in Coercion, Capital, and European States? He sets forth a particular “double question”:

What accounts for the great variation over time and space in the kinds of states that have prevailed in Europe since AD 990, and why did European states eventually converge on different variants of the national state? (p. 5, emphasis original).

Most available explanations fail because they ignore the fact that many different kinds of states were viable at different stages of European history, because they locate explanations of state-to-state variation in individual characteristics of states rather than relations among them, and because they assume implicitly a deliberate effect to construct the sorts of substantial, centralized states that come to dominate European life during the nineteenth and twentieth centuries (p. 11).

It should be immediately clear that Tilly’s approach cannot support a formulation along the lines of ‘more war, more state.’ Tilly’s analytics make it extremely difficult to speak of ‘more’ or ‘less’ stateness — although he does have an unfortunate tendency to undermine this point by using phrases such as “growth of states” as a shorthand for the extension and intensification of centralized control.

Indeed, Tilly would often lament that he should have called the object of analysis “state transformation” rather than “state formation” for precisely this reason: there’s an strong disposition among academics to (1) conflate the Weberian ideal-typical definition of the modern state with the concept of ‘state’ and (2) read the literature exclusively with an eye toward asking when, if, and how particular polities crossed some imaginary threshold into ‘stateness.’ Thus, Tilly referred to the modern state as the “national state” and saw it as a particular configuration of the capitalized-coercion model.

Tilly’s summary of his key claims takes more than a page (pp. 14-15). But I want to highlight a few of them:

War and preparation for war involved rulers in extracting the means of war from others who held the essential reources — men, arms, supplies, or money to buy them — and who were reluctant to surrender them without strong pressure or compensation.

Within limits set by the demands and rewards of other states, extraction and struggle over the means of war created the central organizational structure of states.

The organization of major social classes within a state’s territory, and their relation to the state, significantly affected the strategies rulers employed to extract resources, the resistance they met, the struggle that resulted, the sorts of durable organization that extraction and struggle laid down, and therefore the efficiency of resource extraction.

The organization of major social classes, and their relations to the state varied significantly from Europe’s coercion intensive regions (areas of few cities and agricultural predominance, where direct coercion played a major part in production) to its capital-intensive regions (areas of many cities and commercial predominance, where markets, exchange, and market-oriented production prevailed)….

Nevertheless, the increasing scale of warfare and the knitting together of the European state system through commercial, military, and diplomatic interaction eventually gave the war-making advantage to those states that could field standing armies; states having access to a combination of large rural populations, capitalists, and relatively commercialized economy won out. They set the terms for war, and their form of state became the predominant one in Europe. Eventually European states converged on this form: the national state.

This last claim encapsulates the line of argument that leads many scholars to read Coercion, Capital, and European States as essentially a continuation of the ‘more war, more state’ hypothesis. But this is not a nomothetical statement about state transformation in general. Rather,  it is a particular claim about the trajectory of European state transformation. Tilly reiterates this point in his concluding chapters.

Thus, it makes little sense to argue that, in essence, ‘Tilly is wrong because warfare can also undermine state capacity.’ The fact that warfare might rearrange social and political relations is perfectly consistent with the proposition that “major moments in the growth and transformation of particular states, and of the European state system as a whole” corresponded “to war and preparation for war” (p. 35). Given particular configurations of social classes, military technology, interstate relations, and so forth we should expect that “war and preparation for war” might undermine the capacity of the central organs of the state. Compare Elias’ account of the centripetal and centrifugal cycles of large-scale polities during the so-called dark ages — cycles in which the conditions of mobilization laid the seeds of decentralization via the distribution of land to violence specialists, e.g., armed men on horseback.

Now, if we can demonstrate that the net impact of warfare and mobilization for warfare in Europe during the period in question was primarily an occasion for the weakening of centralized state capacity — such that these processes worked against the historical transformations of interest to Tilly, then he does have a problem. But specific examples of warfare undermining central authority do not necessarily create difficulties for his thesis. And examples of such ‘state deformation’ (meh) from outside of Europe actually work in favor of the broader point: that warfare and mobilization for warfare provide the pivotal moment for transformation in state modalities.

I should also note that even a cursory reading of this summary should devastate the argument that Tilly downplays economic forces in European state transformation. Indeed, economic processes play a crucial role in structuring opportunities and constraints for those bargaining over demands associated with warfare. Thomas Ertman makes this point well:

[Tilly] calls into question the tight link between the degree of military pressure experienced by a given country and the size and bureaucratic character of the state apparatus built in response to that pressure…. Tilly’s argument… provides a more sophisticated explanation… by brining together both geopolitical and economic factors…. (p. 14)

None of this implies that Tilly’s account floats above criticisms. For example, there are some serious difficulties, as Ertman notes, with underlying assumptions about the relationship between distributions of capital and effective revenue extraction. Ongoing work by Deborah Boucoyannis raises doubts about significant increases in European ruler’s capacity to extract revenue during the 16th-17th centuries. Prior institutional characteristics unrelated to the distribution of “capital” may, as she also argues, account for the rise of the capitalized-coercive trajectory. Post-1066 England, most notably, was undergird by a functional Germanic kingdom and, in part as a consequence, enjoyed the advantages of greater state capacity than, say, Capetian France. Indeed, this advantage helped push Philip Augustus to reform French political institutions in ways that expanded its ability to wage warfare.

This leads me to my point about what we should take away from Tilly’s theories of European state transformation.** I see this second kind of argument (much like that of Phil Gorski) as part of the ongoing reformulation of Tilly’s insights. In particular, the introduction of different explanatory accounts of variation in the European topography within which bargaining around warfare and the mobilization for warfare took place.

Indeed, Tilly’s framework also allows more room that critics often recognize for cultural forces and other non-material processes. Tilly may occasionally suggest instrumental explanations for such phenomena, as he arguably does in his discussion of the emergence and diffusion of nationalist ideology. Such intermittent claims should not blind us two important dimensions of the account of European state formation he provided in Coercion, Capital, and European States. Socio-cultural forces play an important role in the processes of claims-making, resistance, bargaining, and legitimation that often determine how pressures associated with warfare translate (or fail to translate) into transformations in the character of states. But these forces remain almost completely under-theorized in Coercion, Capital, and European States — a condition that Tilly started to correct in his later work.

Coercion, Capital, and European States also makes two ofte-neglected interventions in the study of state transformation that extend well beyond the specifics of European state formation.

First, Tilly’s critique of unilinear approaches to state formation. Not only does this receive less attention than it should, but too many of its invocations are little more than perfunctory in character. In some ways, the study of state formation remains wedded to the fundamental question of the social sciences—the problem of modernity. European social scientific inquiry, at least in its current form, developed out of attempts to make sense of profound changes in social, political, and economic life that accelerated during the long nineteenth century. The emergence of the so-called “modern state” was one important component of those changes, and thus the notion of the “modern state” as an analytic endpoint remains deeply ingrained in social-scientific inquiry. As I argued above, this bias helps explain the ‘more war, more state’ mis-formulation of Tilly’s claims in Coercion, Capital, and European States.

Second, his use of increasingly relational analytics to resolve problems and lacunae in the state-transformation literature. I’ve already touched on one aspect of this: the significance of diplomatic, military, and commercial relations to his account. Although Coercion, Capital, and European States largely predates Tilly’s explicit adoption of “relational realism” as a mode of analysis, it contains important traces of that turn. In it, he resolved a series of important methodological and social-theoretic problems:

Tilly tackled each of these problems by adopting, in effect, an understanding of the state as a relational configuration of various transactional processes. He did so at both very abstract levels—“coercion” and “capital”—but also in more concrete ways when discussing the various relations—of negotiation, coercion, extraction, and so forth—that produced, undermined, absorbed, destroyed, and reconfigured political communities in Europe over the course of a millennia.

*At least according to anecdotal evidence and that of an incomplete database. [back]
**I am setting aside his later work (e.g.) in which he added “commitment” to coercion and capital. [back]