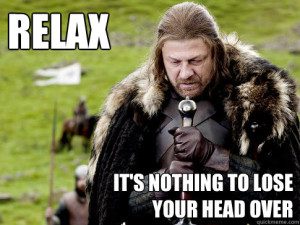 But in truly weird science, humans can now transplant whole heads (or rather, bodies). Too bad this important advance comes too late for Ned Stark. ->

William Beaty writes about the physics of traffic jams, proposing a simple solution ordinary citizens can use to  escape to de-clutter highways.

Cyber-war, nano-weapons, and killer robots, oh my! International Review of the Red Cross has finally published a long-awaited special issue on humanitarian law and emerging technologies.

Speaking of which, South Koreans would appear to have a killer robot problem:

“An autonomous killer robot being developed by South Korea is facing an unusual series of hurdles this week as its manufacturers struggle to figure out how to prevent it from killing itself. The first prototype of the robot, which is being developed for the South Korean military by weapons technology company Samsung Techwin, was completed in early May. But since then, every attempt to test the prototype has resulted in setback, with the robot taking numerous, sometimes extreme measures to end its own life.”

Should We Keep Hidden the Way People Behave When their Actions are Hidden?

The “Israel Lobby” and the Nixon Administration