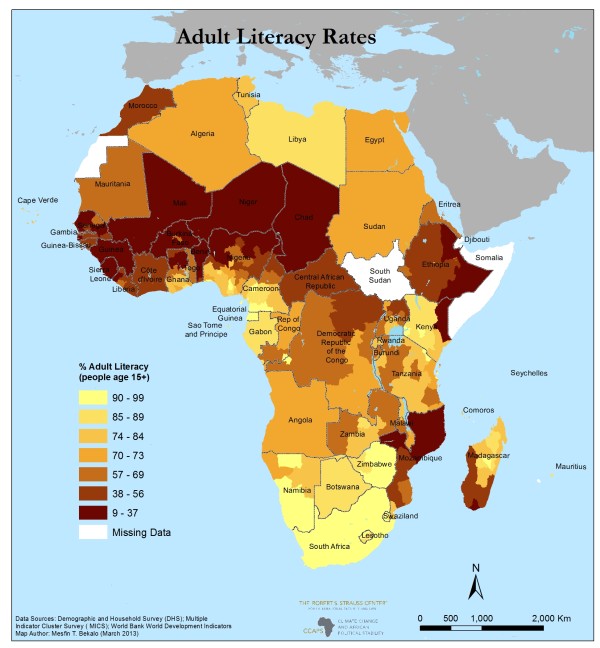 Todd Smith, Anustubh Agnihotri, and I have put together a new resource of subnational education and infrastructure access indicators for Africa, released as part of the Climate Change and Africa Political Stability (CCAPS) program at the University of Texas. This dataset provides data on literacy rates, primary and secondary school attendance rates, access to improved water and sanitation, household access to electricity, and household ownership of radio and television. The new CCAPS dataset includes data for 38 countries, covering 471 of Africa’s 699 first-level administrative districts.

We have used the education indicators and access to improved water source data in the construction of our composite index on climate security vulnerability in Africa, featured in International Security and recently updated on our website. We wanted to make these and a wider set of infrastructure indicators available. The data, the codebook, and shape files for the sub-national units we created for the dataset are available for download. For users of ArcGIS, each entry in the CSV file has a unique ID code that corresponds to a shapefile so you can join the csv file to map indicators of interest. You can also use the csv file for statistical analysis, though you may want to use national data for the other countries for which subnational data is not available. 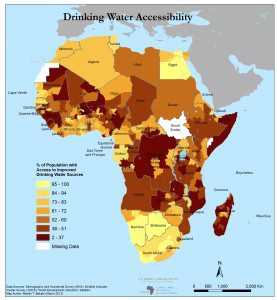 The data were calculated using raw survey data from three sources: the Demographic and Health Surveys (DHS) supported by the U.S. Agency for International Development; Multiple Indicator Cluster Survey (MICS) supported by UNICEF; and the General Household Surveys conducted by Statistics South Africa. For the maps in this post, we also include national level data for countries for which DHS, MICS, or StatsSA data are not available. You start to see the subnational variation in places like Ethiopia and Kenya where the rural eastern regions have much lower literacy rates and in Madagascar where widespread access to improved water sources is confined to the areas around the capital city.

If you read the Journal of Peace Research or the Journal of Conflict Resolution, you have probably noticed an increase in more fine-grained subnational statistical work on the causes and correlates of violence at the local level. One of the limits of such work is that indicators potentially relevant for analysis are often unavailable, particularly for Africa where a “shatter belt” of violence continues over swathes of the continent (even as much of Africa experiences accelerating economic growth).

One of the limitations is that this dataset represents a snapshot for these subnational units for a single year and, given the way the data is collected, not the same year for all the countries. This means that longitudinal analysis is not yet possible. Nonetheless, we hope that this data proves useful and a prelude to more subnational panel data for Africa and beyond.

What are the “Big Issues” of International Politics, and How Should Journals Address Them?