My Enduring Rivalry Endures: What is a Credible Signal Anyhow?

Previously, on Rathbun’s Enduring Rivalry: Brian is locked in an enduring rivalry with this neighbors in which he does not really understand why they are mad at him and why they won’t take yes for an answer, which makes him really, really mad and inclined to do anything possible to drive them crazy and make them look stupid. As it always does, this takes the form of ridiculing their behavior through the construction of yard tableaus that mock the triviality of their complaints. Another neighbor calls it the “best public art installation in the history of Stratford Avenue.” Brian appreciates the compliment.

To bring everyone up to speed, there have been a couple of new developments in my enduring rivalry. A couple of months ago, tired of having the police called on me every time I played the drums, which I only did during the weekdays during work hours, I did some amateur soundproofing. At the advice of someone at Home Depot (Yes, I recognize that seems like a paradoxical statement), I bought some styrofoam insulation boards, and suspended them around the drum set to create a kind of box that would muffle the sound. I did this on a Saturday and tested it out for a minute, with my wife inside to tell me if it worked.

As I exited my garage, the wife of the crazy neighbors, on whose behalf I am taking these steps, shouts over the fence, “We can still hear you!”  Not, mind you, “Thanks for your efforts at making us more comfortable despite all the shit that we have put you through, but it is not quite up to our standards.”  My wife looks at me, on this fine Saturday afternoon, and says, flatly and succinctly, “Go play the drums.”  I did, for the first time, on a weekend. Fuck ‘em. 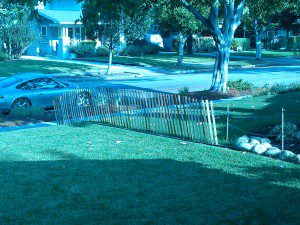 The new security barrier contains 100% of the suicide bombers coming from the Rathbun territories.

The police arrive, telling me of a noise complaint from an unidentified neighbor. Under our town’s laws, the cops cannot make a judgment about what is excessive, only citizens can. They can issue a citizen’s arrest, which the cop is compelled to carry out. Only then is their identity revealed. Then the judge decides what is reasonable. Yes, it is fucked up. If you are looking for a way in which people can abuse the system and waste taxpayer’s resources, this is the perfect design.

I tell the kind police officer I am not going to stop because I know who it is. They can either arrest me or fuck off. The police officer makes his way over to my neighbor’s house. I decide to follow, telling the husband, a meek little man let around by the ear by his wife who kind of looks like a walking penis, to just do it already, hoping to put the issue to bed once and for all. The policeman tells me to let it go and to go back home.  I talk to the watch commander that night, looking for something I can do. He tells me there is nothing. “It usually gets worse,” he says, helpfully.

Following this, the husband begins a quiet lobbying campaign of the all the other neighbors, most of whom they have never met, about how I am a danger to the safety of his wife and children, and that the police officer had to “restrain” me. I know this because all of the neighbors tell me. I guess you could say that it didn’t work. Oh, and they also put up this new and improved fence. No three year old could breach this monster. Except by walking around it. Behold the new Maginot Line!

Fast forward to yesterday, when our gardener puts down some weed killer on our yard. I know, I feel guilty about it, but we have this pernicious weed grass that if not controlled, destroys everything else. The kids are supposed to stay off the yard for a day. An hour or so later, I hear the neighbors kids on their front grass; they are having a picnic. I walk out to tell the wife that it is probably perfectly safe, but that they should probably move to their backyard. At least, I try to tell her. She won’t talk to me, telling me I have “transgressed” something or other and that I frighten her children (see the first post for her role in creating this impression).  And I realize, she believes this shit.  Another neighbor, in proximity, tries to explain what I am telling her. She won’t listen, telling me to call her husband. I text him warning him about the weed killer. He doesn’t respond.  No “thanks for letting me know.” Total silence.

These two little anecdotes confirm for me what I was already inclined to believe. There is no such thing as a credible signal. When people are locked into particular psychosis, as they often are, you can talk all the reassuring gestures you want, they will not even recognize them, much less appreciate them.  Any costly signal I make, like spending $100 at the Home Depot to sound proof, will be denigrated as insufficient. Any expression of concern for their needs will go ignored, even at the expense of their own self-interest. Last night I tried to be the big man, texting the husband, the guy running down my reputation in the neighborhood, and asking him to sit down and work out a modus vivendi. If I cannot tell the wife about a danger to her physical safety then this has truly become irrational. He did not respond.  I am realizing there is simply no solution to this.

This is deeply saddening to me. I truly despise these people, but I don’t like being perceived by anyone as threatening, much less little kids. My mom visited a few weeks ago. Taking advantage of my wife’s absence, she brought for my two boys little cap guns, the old fashioned types with the little fire crackers that load in the barrel. My three year old’s first move was to fling open the front door and start “firing” next door, shouting “bad neighbors.”  This is kind of funny, but deeply tragic, because I never refer to them in that way. They simply pick it up from the atmosphere. My other son goes out several times a week, picks up the leaves that fall from their tree onto our yard, and puts them over the fence onto their property. I tell him not to but he continues to do so. On the plus side, though, our grass looks even better.

What Caused the Iraq War? Debs and Monteiro reply to Lake