Syria: Intervening Not Now But Later 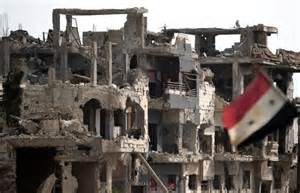 A full-scale US military intervention in Syria is off the table, as is a no-fly zone. The US decision to provide arms to Syrian opposition forces is nonetheless intended to shift the military initiative away from Assad regime. But the opposition is splintered, which has allowed the Hezbollah-backed government forces to level the playing field. Although the outcome remains unclear, it may be time for Western governments to begin serious planning for potential post-conflict stabilization operations.

At this stage it appears the Assad regime has the momentum, aided in particular by Hezbollah but also Iran and Russia.  US and European efforts to provide direct military aid to the Syrian opposition have been slow to take shape, which in combination with regime gains on the ground have fed the new conventional wisdom that Assad is on course to hold on to power.

Yet Saudi Arabia and Qatar have sizable stakes in this fight–not to mention Turkey and Jordan–and are not likely to allow this to happen.  It would not be prudent to bet against them, particularly after Western military aid begins to flow in full.  This still leaves the splintered opposition problem, but this only reinforces the need to start planning for a post-conflict stabilization operation.

For if US efforts in conjunction with allies were to succeed, ironically it may well serve their interests to intervene once the fighting has ceased in order to stabilize post-Assad Syria. Without such an operation, Syria could easily slide back into conflict, in which case events could lead to a wider regional war and direct intervention from a Saudi-led coalition of Sunni states as well as an Iran-led intervention from a coalition of Shia states.

Such an operation would prove challenging.  More than a decade of stabilization operations around the world have yielded mixed results, and few would welcome an expensive effort to stabilize conditions in yet another Middle Eastern country.  These sentiments caused the West to ignore the need for a post-conflict operation in Libya, and the disorder that ensued allowed loose weapons stocks to trigger a conflict in Mali.  The consequences of no “day after” operation in Libya were substantial.

The case for stabilization operations in Syria would become compelling were Assad forced to leave.  The subsequent struggle for power between Sunni moderates and the al-Nusra Front could determine future directions for the Middle East.  A radical al-Qaeda affiliate governing next door to Israel, Jordan, and Turkey would be difficult to tolerate.  One could conceive of Russia supporting a UN Security Council resolution under such circumstances to authorize stabilization operations.

There will also need to be a limited military element to the operation.  The US will need to play a critical role, but it cannot bear the same burden in Syria that it did in Afghanistan.  Along with Europe it would need to provide a modest force for security and training, but individual nations like Turkey will need to take the lead military role.  Moreover, wealthy Gulf states will need to open their purses much more than before.

The civilian operation should be Western with the EU in the lead.  The EU has never taken on such a challenging post-conflict mission; as such it will be difficult for the Europeans to achieve the necessary consensus without US involvement.  Though the US has seriously degraded its Civilian Response Corps, it should offer as many civilian experts as it can spare.  The State Department experts who are currently training the Syrian opposition in non-violent resistance in Turkey should remain and join a larger EU civilian post-conflict operation in Syria.

Close cooperation between NATO and the EU will be required to coordinate military and civilian efforts.  In the past their cooperation in the field has been adequate, but operational planning in Brussels between these two organizations has been held hostage by the Turkey-Cyprus dispute.  This time Turkey’s vital interests are at stake in NATO-EU cooperation in Syria, which increases confidence that obstacles to joint planning and operating can be overcome.

It is difficult to predict which way the current conflict in Syria will end up, as even some sort of stalemate could be the result.  But if opposition forces were ultimately successful in defeating Assad’s forces then it would be difficult for Western governments to ignore their shared security interests in the assurance of post-conflict stability in Syria.

Friday Nerd Blogging: The Chosen One