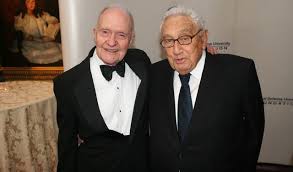 Where Are All the Republican Realists?

In light of the brouhaha between Chris Christie and Rand Paul over foreign policy, conservative columnist Ross Douthat opined in The New York Times that the Republican Party seems to be missing the sort of realist pragmatists of old that might have mediated between these views. He attributes the realist decline to them being out of step on domestic politics and just not really liked by different factions on foreign policy. He writes:

However, I’m doubtful that Christie will ultimately take this kind of split-the-difference tack, because with the eclipse of foreign-policy realism within the G.O.P. there’s a shortage of potential advisers and influencers who represent any kind of middle way between crusading interventionism and Paul-style libertarianism. And if that debate does end up splitting the party in 2016, it could be a case study in why the Eisenhower/Nixon/H.W. Bush realists were so useful to the Cold War-era G.O.P., and why the party misses them today.

The realists weren’t particularly liked by anyone else within the conservative tent: They were too squishy for the Birchers and later too cautious for the neocons, too internationalist for the party’s Jacksonian base, too pro-defense spending for the libertarians, too Arabist for pro-Israel Republicans, too willing to use force for the paleocons and Buchananites. (This is part of why Eisenhower’s presidency is criminally underrated within his own party.) And there were many non-foreign policy reasons why their influence diminished over time: They were mostly social liberals and economic moderates, and as time went by and WASP Republicanism waned as a force in our politics, they increasingly lacked any electoral constituency to speak of on the right.

But their persistent role in Republican administrations, from Ike’s two terms down to Robert Gates’s tenure as Bush’s defense secretary, was deeply important to the G.O.P.’s longstanding advantage on foreign policy. By embodying a version of internationalism that clearly put the national interest first, and a form of Daddy-Party toughness that didn’t necessarily entail starting wars willy-nilly, the realists both helped the party manage its internal tensions on foreign policy — bridging divides between isolationists and advocates of “rollback,” paleocons and neocons — and present a credible, competent and non-scary face to the American public as a whole.

Daniel Larison, a prolific advocate for foreign policy restraint, writes in The American Conservative that he thinks unifying around a realist theme may not be politically attractive within the Republican Party, though it is in his view wise:

Most Republican hawks deeply loathe Republican realism of the past and present, and the post-Bush years have seen that hostility to realism intensify inside the GOP rather than diminish. The last five years are full of examples of the GOP’s active repudiation of realism and realists on many different occasions, whether it is harping on Obama’s “failure” to support the Green movement, nonsensically attacking New START as a sell-out to Russia, bemoaning policies of diplomatic engagement, or calling for new military interventions.

While the emergent debate over foreign policy among Republicans is interesting in its own right, I want to take up this question of whether and why realists are in decline in the Republican Party. This is a theme I have explored on and off over a number of years with my frequent collaborator Jon Monten, first in the pages of Perspectives on Politics in 2008 (pdf), then in an H-Diplo roundtable in 2011 (pdf), later in Political Science Quarterly in 2012 (pdf), and more recently in elite opinion polls in Foreign Affairs online (gated 2012, gated 2013).

I agree with Douthat that the realist cohorts in the Republican Party have declined over time, at the hands of neoconservatives and, to a lesser extent, isolationists. This is similar to the argument that Walter Russell Mead about the rise of Jacksonianism in U.S. foreign policy in his book Special Providence. One of the challenges in trying to understand the factional underpinnings of U.S. foreign policy is characterizing the different ideological dimensions that put someone in one camp rather than another.

Realists or conservative internationalists as we described them are open to multilateral means but are conservative about re-making the world in America’s image. They are incrementalists and pragmatists and will use whatever tools that are needed to defend America’s more limited interests. The last category, conservative nationalists, are like Jesse Helms and father and son Pauls: they don’t want to change the world and when America is called upon to engage internationally, their preference is to do so in defense of America’s sovereignty through unilateral means.

We kind of understand this anecdotally, but it is a little unclear how to categorize different people. Are Cheney and Rumsfeld  liberal nationalists or conservative ones? What about Condoleezza Rice, who got her start as a Scowcroft acolyte but seemed to drift towards the neocon camp in the wake of 9/11, only to reassert her realist pragmatism in the second George W. Bush administration? How do we empirically document changes in the centers of thought over time in the Republican Party, particularly as foreign policy ideas started to come from new think tanks and media?

While documenting this trend is one thing, explaining it is another. Is this transformation an outgrowth of party homogenization post de-alignment and the civil rights revolution? Did this transformation occur as Scoop Jackson Democrats joined Republican ranks? How were realists outmaneuvered in the party? Was it merely a cohort effect? Was there a new regional pattern to the new people coming in to the party? Did an ideological aversion or skepticism to multilateralism increasingly take root among a subset of Republicans? If so, how did it happen?

While I don’t yet have solid answers to these questions, I think explaining the transformation is a critically important research agenda with major policy implications as grand challenges like climate change buffet the planet and the Republican Party — which will eventually have its standard bearer in the White House again — begins to debate America’s role in the world.

The (American) Job Market and Interpretive Methods in Political Science