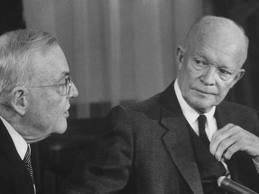 We have a pretty good literature on how presidents use and manipulate their information and propaganda advantages to move public opinion toward their positions on the use of force.  Both bottom –up, rational public arguments and top-down elite cueing models look at the institutional advantages of the presidency such as the bully pulpit, privileged access to information transmitted though classified intelligence and diplomatic channels, forging special access to the media, and the benefit of a history of Congressional and public deference to presidential leadership.

But, when and under what conditions does public opinion constrain presidential decision making on war and intervention?

First, what we are seeing today is not new. There are many cases where we’ve seen the constraints of public opinion on presidential decisions:  Roosevelt faced a deeply embedded isolationist Congress and public on the war in Europe from September of 1939 until Pearl Harbor; Clinton, and much of the international community, clearly floundered on Bosnia because of concerns of widespread public opposition to intervention; and, Reagan desperately believed that the United States should do more to support the Contras in Nicaragua – and despite his popularity, landslide victory in 1984, and his label as the “Great Communicator,” he was blocked by Congress and overwhelming public opposition in his efforts to shift American policy to support the Contras – a constraint thAT ultimately led to the administration’s attempt to do an end run on Congress and the Iran-Contra crisis.

But, I think Obama’s handling of Syria — the conflicting statements on policy and strategy — have really interesting parallels to Eisenhower’s confused effort during the Indochina/Dienbienphu crisis in 1954.    First, I like Ike.  But, he’s been given far more credit for his handling of the crisis than he deserves.  Many conclude that Eisenhower’s maneuvering during the crisis to keep the U.S. out of Indochina was a great example of presidential prudence – that Eisenhower successfully pushed back against an aggressive effort by various haws for intervention.  I disagree.

It is clear that Eisenhower was deeply concerned (and reluctant) about introducing American forces to support the French in Indochina.  But, he was also deeply concerned about the effects of a French defeat and a communist take-over and the perception of American weakness in the face of communist expansion.  While he believed the negotiated settlement in Korea could be an “insulated loss” because it restored the peninsula to the status quo ante, he feared that a French defeat in Indochina would “not be insulated.”  In fact, it was here that he coined the domino analogy and argued publicly that a defeat in Indochina would accelerate the spread of international communism across all of South Asia, the Middle East, and throughout the rest of the world.

A decade ago, I spent large chunks of two summers in Abilene, Kansas plowing through Eisenhower’s presidential papers.  My reading is that as the crisis progressed into late March and April, the tensions in Eisenhower’s position – between his reluctance to intervene vs. his concerns of the broader geo-strategic significance of a French defeat – clearly shift toward the latter.   Throughout the first two months of 1954, there had been a general feeling that the French would ultimately hold out until the rainy season when Ho Chi Minh’s forces would have to pull back.  However, when the French defeat became more likely, indeed imminent, in late March, there was a flurry of activity in the NSC and Eisenhower tasked his military commanders to move forward on planning for an intervention “to save Indochina from the Communists.”  He also tasked his administration to build a strong public case to sell the dangers of a communist takeover.

The problem was that public opinion was overwhelming opposed to intervention.  In September of 1953, Gallup polling revealed that only 9% of the public supported fighting in Indochina.  George Gallup made a striking notation by footnoting an editorial comment in the release of the September poll:  “The size of the disapproval vote is unusually significant.  Rarely in the polling annals has opinion divided in such a lopsided fashion as it does in the case of the troops to Indochina issue.”  That number ran consistently below 15% support throughout the spring of 1954 as the crisis escalated.  Other polls suggested wider support, but only if the action included broad international support and active contribution from others.

That opposition came from multiple sources.  First, in the wake of Korea (and the legacy of a bad war) there was a strong aversion in the public – and among the Never Again crowd in the U.S. Army – against launching another limited land-war in Asia.  Second, there was a general opposition on the basis of estimated costs of war.  Korea had been initially sold as likely to be a relatively cheap and easy effort, it wasn’t.  And, finally, there were many who opposed intervening on behalf of French colonialism – both for moral and prudential reasons.  Many saw Ho Chi Minh’s rebellion more as a nationalist inspired, not communist driven, campaign.

Given the overwhelming opposition, the easy route for Eisenhower would have been to drop the matter entirely.  Contrary to some current thinking, there was certainly no political pressure to intervene — or to push back against.

Yet, convinced that the US needed to prevent a cascading of international communism, Eisenhower moved forward trying to navigate the domestic political constraints as he developed a strategy on intervention. Given the overwhelming opposition, he ultimately concluded that there could not be an intervention without public and Congressional support.  The administration’s own internal polling on the crisis suggested that support could be generated by building a stronger international coalition for “united action;” by soliciting an explicit invitation from the Associated States of Indochina for American intervention; and, by securing a Congressional vote approving an intervention.  With these objectives in mind, Eisenhower tasked his key advisors to devote extensive time and energy in early April to a massive public relations campaign to sell the intervention – most of the senior leadership was dispatched to make national speeches outlining the imperative for American involvement to forestall a communist victory.

In the end, developments in Indochina and in Paris unfolded quickly in mid-April of 1954 and the intervention question quickly became overcome by events.   Eisenhower never faced a single moment of decision on Dienbienphu.   Obama’s floundering and the outcry over intervention in Syria is quite similar to the outcry against intervention in 1954.  And, Kerry’s gaffe (or was it really a planned strategy?) has created a sudden shift in events that has now altered Obama’s course for the time being.  Obama may find himself in a situation similar to Eisenhower in which the question of intervention is overcome by events.   History has proven to be relatively kind to Eisenhower in all of this.  Although, ironically Eisenhower’s beliefs framed by his domino analogy, led him to navigate his way through the public constraints into committing U.S. military and financial support to South Vietnam at Geneva in 1954 and beyond  – a commitment that did not end until 1975.  We’ll see how all of this unfolds for Obama.

Friday Nerd Blogging: Two for the Price of One