“Breaking Bad”: Through a Literary Lens 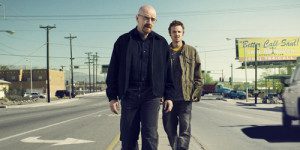 “Breaking Bad” has achieved something akin to artistic immortality, crowned by critics near and far as the finest television show in history. Such is its outsized achievement that it has taken up its perch in that rarefied stratosphere where only giants roam and even the creative gods bow down. Once Breaking Bad reached such heights it could no longer be evaluated in mere entertainment art terms. Just as Dylan is now revered with the poets, Breaking Bad began to get lionized alongside the likes if not of Bellow, Hemmingway, Morrison, and Faulkner then at least Mailer, Roth, Styron, and Carver. But something happened just shy of the mountain top. For although it went out with a bang, the final episode may have rendered it a mere mortal once again—albeit still the Muhammad Ali of TV.

“Breaking Bad” glowed on the verge of the literary pantheon by achieving something rare for a television production, elevation to a higher genre…it achieved this with perhaps the most complex and creative plot in television history…its unmistakably epic quality…its deep inquiry into the human condition…to the degree it had one, its not so trustworthy narrator…the shifting moral centers of its characters, and not only the protagonist…the movie-making quality of its filming and production…in particular those first ten minutes before the credits rolled, tantalizing and beguiling…at times abstract, and almost always foreshadowing or deeply symbolic…its layered commentary on the darker parts of American society (and the darker parts of ourselves)…and it limned the place by the way in which the suburban wasteland of Albuquerque became for all intents and purposes one of the central characters on the show.

It took writing, directing, and acting of a quality close to brilliance to pull this off. And did it ever, grabbing us by the scruff of the neck and forcing us to look at it—look at ourselves—a little too closely, unsettlingly, in the mirror. On top of it all was the sheer hypnotic quality to our perception of the show. It got a hold of us and wouldn’t let go, mesmerizing us with its violence yet anesthetizing us to its effects. “Breaking Bad” was suffused in piercing moral questions, all the while skewing our sense of morality with an accumulation of malevolence still somehow shot through with pathos. It commanded us to identify with, and even stand up a cheer for, thinly veiled evil.

I predicted one of three outcomes: Walt going out in a kind of blaze of faux glory, getting gunned down in midst of his criminal machinations and receiving his just desserts; Walt getting overcome at long last with a more proper sense of morality and sincerely engaging in self-sacrifice, by either turning himself in or taking his own life; or Walt returning to give the white supremacists their own brutal comeuppance and save Jesse thereby gaining a little redemption in the process. I had my money on the third outcome, but put it this way: this prediction wasn’t fully accurate, because Walt did exactly this but instead received redemption in full.

At first I was happy with the ending, even somewhat relieved. It seemed a whole lot better than the finale of the Sopranos (to which creator Michael Gilligan and lead actor Bryan Cranston owe a debt of gratitude). And it was, from the perspective of a television viewer. All the loose ends were tied up, and Walt came out a rose after all—therefore justifying our faith in him. He wasn’t a monster after all. No, he was a man with obvious flaws but a family man, a man of honor, a kind of great man in the classic larger than life sense. He set Jesse free, and meted out a just punishment to the racist vermin that the authorities themselves could not. And before the wildly entertaining final scene, he was accepted by Skyler and got a tender fleeing moment with his infant daughter. Bravo – three cheers – thumbs up.

But therein lay the rub. If “Breaking Bad” had legitimately earned its literary bona fides, then it lost them there in that final episode. This was in a way the ultimate surprise, that the writers would squander their vaulted status and put in jeopardy their hard won achievement. They may have made their devoted viewers happy, but in critical terms it was a pyrrhic victory. For in the end, what makes good television does not make quality literature. Out went the nuance, the dull gray ambiguity; and in came clarity, that nice and stark black against white.

In literary terms we actually needed more of a Sopranos ending, albeit a thoroughly ambiguous ending set somewhere besides a charming diner with a family looking around sheepishly. To live up to its previously established literary plaudits, the show required a finale that explicitly did not tie up loose ends, and in particular one that made the viewers feel we still have a crick stuck in our collective craw—that nagging sensation that Walt may really have been bad, evil even, and we with our moral compass pointing every which way but right experiencing unrelenting unease.

Instead it all gets a little too neatly, and falsely satisfyingly, sorted: 1) Walt is able to get back in the game one more time 2) Walt outfoxes many a law enforcement officer in the process 3) Walt gets the white supremacists once and for all 4) Walt gets back at his former business partner who jilted him 5) Walt figures out a way to take care of his family after all 5) Walt frees and essentially reconciles or at least puts things right with Jesse 6) Walt reconciles with Skyler, ironically by admitting he was motivated as much by self-love as by love for her and his children (and he gets to stroke Holly’s face and gaze upon Junior’s one more time), and finally 7) Walt gets a satisfying death, back with “his precious” as the Lord of the Rings/John Wayne-addled Gilligan put it, the confines built with his own hands where he felt most alive. Where’s a loose end when you need one?

Oh, this was a television show after all. It was an enormously meaningful final episode that was too plain sympathetic to Walt, the darling of Gilligan and his merry band of yeomen writers. Something caused them to err with a telling finality. Which is a bit of a shame, for these artists had reached the highest echelon of laudatory entertainment, when your production crosses over into a different realm. They had steadily, painstakingly crafted a series of progressive depths of Walt’s depravity, all the while cloaking him in a not too cloying domesticity as a loving husband and father. He was so fixated on his epic quest that the only perk he allowed himself, awash in riches, was a semi fancy car in the final season. The true Walt had not had a heart, or at least half a heart, from midway in the first season all the way to the final episode when—presto—we discover the ravenous lion has a heart after all.

Yet Walt did in fact needlessly kill Lydia; however, we were manipulated into thinking it was something grand. He got the goods on her, hurrah hurrah. But when this brash violent act should have helped to balance out all the heart string pulling, it was written and portrayed as something else: sweet (false) justice. For despite her not being as fully evil (though she did pursue a massive murder hit on nearly all involved at one point, and on Walt too at the end) Lydia surely did not deserve this fate, at least at Walt’s hands. She had a child too after all.

But in that final episode the “good Walt” tropes outdid the lone “bad Walt” trope, as we were doubly manipulated, first into feeling uneasy about siding with and yet egging Walt on, and then into giving him a final giant break and thus availing ourselves of the ability to keeping cheering for Team Walt because voila we get our hearts’ desire—fulfilled all the way to the tune of still siding with Walt because, why, he’s a good bloke after all. A criminal no doubt he was, but our criminal—a man of principle and a certain sort of morality. Walt, the hero.

Gilligan bragged he would turn Mr. Chips into Scarface, but Walt never really got turned into Scarface. By the time that happened he was vacuum-cleaned all the way to New Hampshire in the penultimate episode. Before that every time he did something egregious, it would not be long before he was right back home caring for his family (save for the period he was booted out of the house by Skyler). Even when he killed Gus—pronouncing to Skyler “I won”—he was also winning her back, this time as a part of his lawless, violent schemes and unending skulduggery.

No, this show was not about love, not about redemption (at least until the very end of six seasons). Its great achievement was its preternatural existence out in that vast no man’s land in-between black and white, the slate gray complexity of contradictingly being pulled in both directions without let up. For it wasn’t pure evil either, just plenty evil. We all danced with the devil. But ultimately the love theme came to the fore. We loved that final episode; and we loved Walt, not a scoundrel after all. By the end of the final, flawed episode Walt the evil genius had been humanized, just like the villain Mike that we also identified with had been, even Gus. And we had rooted for Walt to kill both of them. All of it messed with our moral compass, something good too.

All in all “Breaking Bad” was a morality play, something as if performed on a stage rather than in celluloid on our screens. It pulled us in, against our better instincts. And we suffered for it, unlike any other television show has so fully forced us to. I am going to try to forget that final episode. Instead I will imagine Walt died out there in the desert, right in the midst of his megalomania out there in New Mexico’s vast expanse making a final fatal mistake in pursuit of his money—not with a bullet from Hank’s gun, but because of his own dark hubris…cut down, without retribution…without his family…without a chance to put everything in its rightful place. How terribly unfair to our hero this fate of his would have been. But the tale in its literary totality: a thing of beauty.