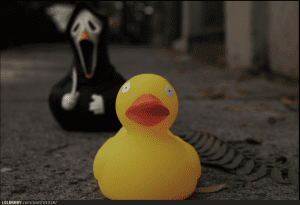 “The current blackout is a result of a cyber attack”

Ominous words from the National Geographic channel and their premier movie this weekend.  Not really sure how the news reporter can still report given the aforementioned blackout, and also not sure why toilets cease to work when you lose power, but the point is taken.  We are all at the mercy of roving mobs of vigilantes because of the dangers of a cyber attack.

I am counting the days until Western developed countries encourage people to duck and cover, like they did during the Cold War in the event of nuclear attacks, to avoid the damage from a massive cyber attack.  Constantly, the security industry, both conventional and internet protection based industry, keeps trumpeting the coming cyber doomsday.  We see it in this show, we see it in NBC’s Revolution, and we see it in government testimonies.  The fear of digital security has even creeped into the Obamacare dispute.

Have we collectively lost our minds?  It is as if we cannot remember a time as recently as 20 years ago; when no one had fast internet service, when we had to look up information in encyclopedias, and you know, actually talk to people.    Has nearly a decade of no obvious and serious threat to the homeland produced a sense of mass hysteria where we are actually convinced that we fear the thing we trust the most?  Most assume that the cyber arena is an area of vulnerability.  That more connections make us less secure and more vulnerable, but if anything, the internet era has actually demonstrated that we place profound trust in cyberspace.  We give forth our details, connections, and memories with little question.  This buzzfeed examination of what happens when you sign up for Facebook in 2013 really illustrates this point.  We seem compliant with giving digital sources access to our most prized and sacred possessions, our computers.

I have been joined by a few other scholars in advancing the point that the coming cyber doomsday is an inflated threat.  A forthcoming Journal of Peace Research article I have with Ryan Maness further demonstrates that of the cyber “attacks” (we prefer the term incidents and disputes) that have been witnessed in the last ten years, most have been of very low severity and impact.  The greatest cyber attack of our time, Stuxnet, has already been debunked as an important event in that evidence actually shows that Iran was able to increase uranium production during the period of attack, not decrease it as suggested by security sources.

There needs to be a reevaluation of what we call the security paradigm.  The basic idea is that we are insecure in this world and threats are out there.  Our reaction to these threats will either save us or doom us.  My perspective is that our reaction to these threats can actually make the issue worse in that we set off the security dilemma.  Our reaction to fears can make these fears a reality by encouraging other states to build the same cyber capabilities.  The last decade has seen a profound overreaction to the terrorism threat.  We will see the next decade as evidence of a profound overreaction to the cyber threat.  What threat is next on the list?  How will we overreact to it?

Sorry little girl, Daddy is not coming home because Twitter is down.  Now go hide under your desk, but don’t check Facebook, because its dead!

blackoutcyberdoomsdaythey are out of ideas

Why I Didn’t Quit Academia