Can third parties do more than foster temporary, unstable ceasefires? Without perpetually holding the belligerents at arms’ length via heavily militarized buffer zones? Is it possible to make peace self-enforcing at a reasonably low cost?

Recent work on conflict management suggests not. Less intrusive approaches to mediation, such as information provision, fail to solve the problem that poses an obstacle to efficient negotiate between the belligerents in the first place. More intrusive approaches such as deploying armed peacekeepers are often successful, at least if they come after a conflict ends, but entail great costs. You want lasting peace on the cheap? Good luck with that.

Writing with Anna Pechenkina, I have argued that the consensus view may be too negative. Third parties can raise the effective cost of war by promising to provide subsidies if and only if war is avoided. But even that does not solve the underlying problem. Subsidized peace may persist, provided the provision of the subsidies persists, but it is not self-enforcing.

In a fascinating paper, Rob Carroll offers some optimism. He demonstrates formally that third parties can remove the risk of war, in a fundamental sense, by engineering transfers of economic and military resources in such a way that the natural outcome of trade will reflect the expected outcome of war. Thus, neither side will stand to gain from fighting and will not be expected to do so. In equilibrium, the two sides make their own peace—but they would not have done in the absence of mediation.

Consider everyone’s favorite case of conflict management: the 40 years of peace between Israel and Egypt following a 25 year period in which they fought 5 wars. This case has been discussed by others, and Rob is not the first to draw attention to the role of foreign aid, both military and economic. But his take is different than that of others (including my own). The US has not just subsidized peace, Rob argues, but made it self-enforcing by aligning military capabilities with economic resources in such a way that neither side expects to profit from war. Foreign aid outlays increased dramatically in the immediate aftermath of the 1973 Yom Kippur War. (See below.) 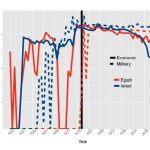 But it is not until after several years of military assistance to Egypt brings about a military balance consonant with economic conditions that deep, meaningful peace is achieved. Once it is, we see Israel and Egypt finally begin to trade with one another. 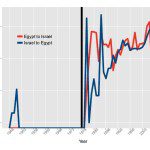 That is not to say that we should feel sanguine about the Sinai. Recent events, including the suspension of US military assistance to Egypt, are cause for alarm. (To say nothing of tensions between Egypt’s new government and Hamas, which have prompted the former to threaten invasion of the Gaza Strip.) But it’s not just that this reduces the (opportunity) cost of war for Egypt, as Anna and I would argue. Rather, should the US deny Egypt the military assistance to which it has become accustomed for too long, the balance of power may no longer align with economic factors in such a way as to ensure that neither side could expect more from war than trade. In other words, we should certainly keep an eye on US foreign aid, but we should pay even closer attention to trade between Israel and Egypt (which only came about because of aid, yes, but may persist in its absence). If the two stop trading, we’ll know that peace is no longer self-enforcing and it will be time to panic.

More broadly, the implication of Rob’s argument is that third parties can do more than simply increase the costs of war by placing peacekeepers between the belligerents or providing conditional subsidies. They can bring about conditions under which the two sides will choose peace of their own volition, because neither will expect to profit from war. That is an important insight and one that has been missing from the debate.

The power of mentorship: a reflection