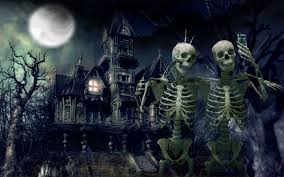 Halloween is not celebrated in Turkey. Yet if they were celebrating Halloween, Turks who support democracy, secularism, human rights, and the rule of law would not have a hard time finding a haunted house. The country seems like a haunted house. This group of Turks, “modern bandits” in the eyes of the Turkish Prime Minister Erdogan, have long been fearful of Turkey’s future. Now they are even more alarmed. And there is good reason for that. A glance at few of the scary things that have happened since spring/summer 2013 explains why.

Gezi protests of last summer were not about a park. People rebelled against the years-long AKP reign that wreaked democracy and secularism in Turkey. The government’s plan to destroy the park in Taksim, Istanbul was simply the last drop.  Then came the attack on Middle East Technical University (Metu). A little over a week ago, Major Melih Gokcek’s “friends”–allegedly without his knowledge– “surprised” him by destroying 3000 trees on campus for the construction of a controversial highway project. To add to insult to injury, friends of Gokcek bulldozed through Metu’s forest in the middle of the night on a holiday. Just a few days later, clouds of tear gas again pervaded Metu’s campus.  Peaceful activists gathered  to replant trees were attacked. Civil society lost again.
And on October 22, democratic secular Turks got boo-ed by the European Union.  EU governments agreed to re-open accession talks with Turkey in early November. The timing of this decision is very unfortunate. Erdogan will claim this decision as his big victory. He will most likely portray the new round of negotiations as the EU’s endorsement of his government’s successful policies and reforms. Emboldened by this decision, he will become more daring.  Germany could have done a big favor to the frightened anti-AKP minority in Turkey by maintaining its opposition to the re-opening of talks.
Turkish politics is not my area; I do not claim any expertise. But I think  second-image reversed approaches will become increasingly more useful for understanding Erdogan’s future policies towards the opposition.