Members of international institutions typically honor their commitments. But that does not, by itself, tell us much. States are unlikely to join institutions that require them to do things they have no intention of doing. Indeed, some argue that institutions merely act to screen out those least likely to comply. Others, however, have argued that institutions do in fact constrain states – that they are not mere epiphenomena. One prominent mechanism through which institutions are thought to alter state behavior is by mobilizing pro-compliance groups domestically. Institutions may lack enforcement capable, after all, but few governments are entirely insensitive to domestic pressure.

But, as Stephen Chaudoin cogently observes in this working paper, those who stand to lose if the government adopts the institution’s preferred policy are unlikely to give in without a fight. And such groups virtually always exist; if they did not there’d be little need for institutions to promote cooperation in the first place. Put differently, while WTO rulings may raise awareness about the effects of tariffs and Amnesty International might draw attention to human rights abuses, the net effect of such efforts might simply be to increase the amount of effort those advantaged by the status quo invest in defending it.

Stephen analyzes a formal model in which an institution first decides whether to send a signal about the benefits of cooperation, such as announcing that a government’s current policies are not in compliance with the institutional charter/international law/transnational norms; then two groups within that state—one favoring compliance and one opposed to it—simultaneously select mobilization levels. By assumption, the probability that the government comes into compliance the desires of the institution is determined by the pro-compliance group’s mobilization relative to that of the anti-compliance group.

The key insight of the model is that institutional messages are most effective in inducing compliance when the pro-compliance group is relatively equal in strength to the anti-compliance group. If the forces in favor of compliance are more powerful than those opposed to it, then there’s little need for outside pressure. On the other hand, if those advocating compliance are themselves greatly outnumbered, then even if the institution’s message causes them to fight harder for what they believe in, they’re unlikely to be successful. If, however, the two groups are equally influential, a call to action by an international institution may tip the balance.

To illustrate the importance of each side’s relative influence, Stephen then discusses the 2013 election in Kenya. This is particularly interesting case because the ICC indicted two of the presidential frontrunners (Kenyatta and Ruto) during the campaign. A common interest in defying the ICC then led these two to unite. This is particularly noteworthy because the two men were indicted for their involvement on opposite sides of post-election violence in 2007. But for the ICC indictments, it is exceedingly unlikely that Kenyatta and Ruto would choose 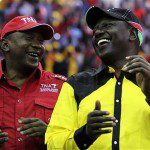 to work together. Yet their efforts have proved successful so far, as Kenyatta won the presidency and the Jubilee alliance claimed a majority of seats in parliament. Consistent with the logic of the model, in regions of the country where Kenyatta’s base of support was initially either very strong or very weak, his estimated vote share differed very little from what we would have expected based on polls prior to the ICC indictments. However, in regions where he initially enjoyed a moderate level of support, the ICC indictments appear to have cost him a considerable amount of support. In short, Kenyatta and Ruto successfully defied the ICC despite the fact that the very mechanism through which international institutions are though to promote compliance appears to have been at work among some Kenyans. The problem is that the indictments also mobilized a lot of the wrong people.

International institutions may well induce compliance where none would otherwise exist, and they may do so by mobilizing support. But they’re only likely to have such an effect when those who favor compliance are powerful enough to overcome those advantaged by the status quo, yet not so powerful as to have been likely to get their way absent input from the institution. How often this occurs remains a matter for debate.