What Terrorist Attacks Don’t Tell Us

This past week, terrorists struck Westgate Mall in Nairobi. Al Shabaab, a Somali Islamist organization, claimed responsibility. Frustratingly, we still know very little about the attackers, their origins, or the Kenyan security forces’ response. And the news about the last just keeps getting worse.

But there has been some analysis of the attacks – by both journalists and academics. In one of the most widely-circulated pieces, Somalia specialist Ken Menkhaus suggested that the attacks were a sign of desperation, the last gasp of an organization that had run out of an intra-Somalia game (also, here and here). Another strand of argument suggests that the growing ascendancy of a single Al Shabaab leader, Abdul Abdi Godane, has pushed the organization toward Al Qaeda, toward international jihad, toward further attacks on soft targets abroad (here and here and here). The presumption is, again, that we’re at a critical juncture for Al Shabaab, a moment of inflection at which the organization changes its character and its aims. See my AU colleague Joe Young’s piece at Political Violence @ a Glance for a roundup of some of this. 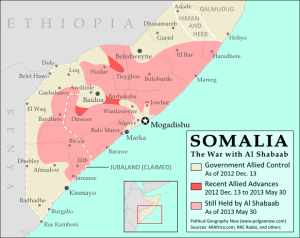 Both of the Shabaab narratives above are based on magnification. Al Shabaab has suffered serious setbacks over the past year (which continue), and it is in the midst of an often-violent centralization of power under Godane. But it is not a militarily defeated organization. ANISOM’s position is very fragile, local and clan politics remain fluid (especially in volatile Juba), and Al Shabaab itself still has access to resources and the power to recruit. If we think over the last ten years in Somalia (the Ethiopian invasion period is particularly instructive here), it doesn’t seem a reach to imagine Al Shabaab reconstituting itself as a successful military force – perhaps under a different name, perhaps with less “global jihad” content. Even if it doesn’t, it could easily remain an obstacle to the Somali government establishing effective control over the significant amount of territory beyond its current Kismayo and Mogadishu islands. Regarding Islamism and global jihad, there have always been two faces of Shabaab, and this is likely to continue. I’ll say more on this below. But let me also point readers to an excellent April piece by Stig Hansen that makes this point. Hansen is the author of the recommended Al Shabaab in Somalia (OUP, 2013).

So, yes, Al Shabaab is diminished in terms of its control within Somalia, but the future remains uncertain. Focusing on military gains by ANISOM and KDF troops (now also ANISOM) is precisely the wrong way to think about the coming years. For the right way, go and read Armin Rosen’s Foreign Policy piece immediately.

So that’s the end of my Somalia points. On to tentative points about the broader discussion of Somalia and Westgate … and Mali and Boko Haram and so on.

The growth in terrorism and Islamism across north Africa and the Sahel is real. But the organizations behind these trends are often quite canny in leveraging local grievances and pre-existing social institutions unrelated to Wahhabi Islam. More importantly, I’m skeptical that we can link tactics and appeals to particular configurations of organizational resources or particular moments in organizational lifecycles. Increased collaboration with Al Qaeda, increased deployment of the language associated with international Islamist organizations, increased attacks on soft targets or international actors: these things can convey weakness. For instance, they might suggest a greater need to recruit from abroad, build local prestige via high-visibility attacks, or attrack money from Al Qaeda sympathists in the Gulf.  But they can easily coexist with strong organization, with less religiously- or internationally-centered local recruitment, with adaptable leadership capable of playing a sustained, long-term, two-level game.

It makes sense that American-based analysts would tend to overestimate both the importance of international audiences and the extent of international collaboration … but these distortions shape policy. And they lead to what is quickly become a single approach to counterterrorism: increased US and Israeli training and support of local militaries — with some not-great consequences.

* I should be clear: I’m not complaining about Menkhaus, an excellent scholar who has often emphasized the shadowier sides of developments in Somalia.