Why the US Spies on Its Allies 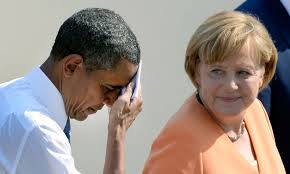 The Guardian article this week that disclosed the story of U.S. eavesdropping on the leaders of several US allies said that the surveillance  produced “little reportable intelligence.”  This isn’t really a surprise — I can’t really imagine that listening to German Chancellor Merkel’s phone conversations are going to give US analysts and policymakers a whole lot more than they get from open source and normal diplomatic channels. So why does the US do it?  The cheap answer to this question is that it comes from that sinister NSA organization. From this morning’s NYTimes:

In Washington, the reaction has set off a debate over whether it is time to put the brakes on the N.S.A., whose capabilities, Mr. Obama has hinted, have expanded faster than its judgment. There are now two groups looking at the N.S.A.’s activities: one inside the National Security Council, another with outside advisers. The president all but told Ms. Merkel that “we don’t have the balance right,” according to one official.

“Sure, everyone does it, but that’s been an N.S.A. excuse for too long,” one former senior official who talks to Mr. Obama often on intelligence matters said Friday. “Obama has said, publicly and privately, that just because we can do something doesn’t mean we should do it. But everyone has moved too slowly in moving that from a slogan to a policy.”

But, is there something more here? Why does the US eavesdrop on its allies?  The problem here isn’t simply the NSA run amok and NSA “excuses.”  There are formal interagency processes that establish and direct all intelligence collection priorities — including the NSA’s.  The fact is that the NSA eavesdropping policy does not come from within the NSA, but from the senior policy community that demands it.

My experience as an intelligence analyst as well as reading the extensive literature on intelligence over the years leads me to this simple conclusion:  too many senior officials are seduced by the salacious details and the power trip that comes from this type of surveillance.  In addition, too many senior policymakers think the higher the classification of the document and the more sophisticated the technology behind its collection, the better it is.  The reality, however, is that most top secret intelligence of this type is helpful only on the margins.  In fact, much of it is just plain garbage.  Yet, senior policy makers routinely ask for raw signal intelligence reports even when the analytical community deems open source or general diplomatic communications to be more informative and reliable.  There’s almost a voyeuristic element to it all — intelligence meets reality TV.

Of course, there’s always some other rationale behind it.  John McLaughlin, a former acting director of the CIA said in response to this week’s disclosures that this is all pretty normal: “We want to collect as much info as we can, so we can be as fluent as we can when we make decisions.  It’s just what governments do.”

But this isn’t just spying.  It’s electronic eavesdropping on allied leaders.  There’s always a risk to reward ratio involved in intelligence collection.  President Obama is right that we don’t have the right balance on this — the fall-out from this episode will be much more costly than the benefits from the intelligence collected.   In the end, this type of eavesdropping is simply not necessary, and ultimately counterproductive.  Yet, it’s another instance in which too many in the policy community simply couldn’t help themselves from being seduced by power and intrigue.

[UPDATE: This is going to get worse for the US. From the BBC this (Sunday) morning:

Leaked documents say a US listening unit was based in its Berlin embassy – and similar operations were replicated in 80 locations around the world….

…President Barack Obama apologised to the German chancellor and promised Mrs Merkel he knew nothing of the alleged phone monitoring and would have stopped it if he had, Der Spiegel reports.

“Obama did not halt the operation but rather let it continue,” the newspaper quoted a senior NSA official as saying.

Her number was still on a surveillance list in 2013.