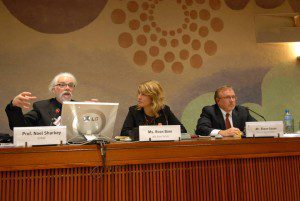 The Campaign to Stop Killer Robots secured an important victory last week when delegates of States Parties to the Convention on Certain Conventional Weapons (CCW) voted unanimously to take up the issue as part of their work to oversee the implementation and further development of the 1980 treaty, which regulates weapons causing inhuman injuries to combatants or civilians.

The CCW process, which includes yearly meetings of state parties as well as review conferences every five years, have become a periodic forum for discussions not only of how to enforce existing rules, but of norm-building around the humanitarian effects of conventional weapons broadly. Norms around landmines, cluster munitions, blinding lasers and incendiary weapons have been incubated in this forum in the past, so it is no surprise that anti-AWS campaigners used this year’s meeting in Geneva as an opportunity to press their cause regarding the dangers of autonomous weapons.

As Matthew Bolton writes, that governments voted to “mandate” the CCW process to examine AWS means the issue is decisively on not just the humanitarian disarmament advocacy agenda but also on the international agenda. This “mandate” to consider the issue will include a four-day meeting next year, and a report by the Chair to the States Parties. A single veto could have prevented this international body from further consideration of the issue, and the fact that important stakeholders like Russia and the US did not forestall a larger discussion signals the salience of the issue and the tremendous agenda-setting success enjoyed by the campaign so far.

Is this “the first step towards outlawing killer robots?” Maybe. It is certainly a step in a norm-building process. What that new norm might look like depends on what happens at the Experts’ Meeting next year, the findings of the report that is to result from it, and any subsequent work leading up to the 2016 Review Conference. Historically, the CCW process is in many respects a less than favorable framework for working out robust, red-line disarmament norms. Most of the weapons the treaty covers have been regulated rather than banned out right. And the institution’s consensus-based decision-making process makes it easy for veto players to water down new normative understandings.

For this reason, despite its symbolic importance, the CCW’s practical involvement in norm-building sometimes gets overstated. Indeed, global civil society has a history of abandoning the CCW process when it appears that stone-walling will result in weak norms, and establishing independent treaty processes led by like-minded players – a process that Patrick Cottrell has called “institutional replacement.” The Ottawa process that led to the Mine Ban Treaty was the first such initiative; the Oslo process for Cluster Munitions adopted the same model. While this is an important and promising moment, the shape and trajectory of norm-building efforts will depend a great deal on the tenor and outcome of next May’s CCW meeting. And one thing is sure: if that meeting results in weaker norms that hoped for my human security advocates, NGOs may simply take their cause elsewhere.

Tuesday Evening Linkage: Shorter and Later Than Ever!