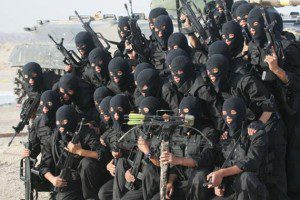 Lionel Beehner and Joseph Young write in The National Interest that while targeted killing by drone strike is increasingly denounced (and decreasingly used by states), cross-border incursions by counter-terror ground troops are an increasingly accepted practice – despite the fact that both violate state sovereignty.

Citing the capture of Abu Anas Al-Libi by US special ops in Libya, drug kingpins by Brazil in Bolivia and Peru, and the frequency of cross-border incursions in Africa, they express surprise that not all violations of sovereignty are equally frowned upon, and explain this based on the idea of credible commitment:

“It is precisely because these commando missions are more serious and risky that they have become more legitimized in the eyes of the international community than drone strikes. Such missions signal a greater seriousness and commitment to the mission. They require states to have more ‘skin in the game.’”

That’s an interesting hypothesis. Still, I don’t think the piece makes much conceptual or empirical sense and actually clouds a couple of important issues.

First, the relevant distinction is not between ground troops and drones. It is between hunt and kill missions, which can be accomplished on the ground or by air, and raid-and-snatch missions which require ground troops. The greater acceptability the authors point to, is not for commando missions per se, but for raid-and-snatch missions specifically, as an alternative to the far more morally dubious targeted killing policy increasingly decried by human rights groups. This should not be confused, as the authors do, with the emergence of a blanket international acceptance of unilateral sovereignty violations by special ops: ground troops, after all, can also commit extrajudicial executions and/or use disproportionate violence and if they do so I cannot imagine this would be considered any less opprobrious than drone attacks – indeed, as the authors suspect, it might be considered moreso. Such missions also probably shouldn’t be conflated with multilaterally-sanctioned humanitarian interventions, which are the kinds of missions primarily referred to in the article on Africa the authors cite.

Secondly, the authors’ focus on sovereignty and military risk-taking rather than due process and civilian harm mitigation leads the authors to some wildly unsupportable conclusions about international norms. In particular they argue that commando raids are a new prescriptive international norm, while a prohibition norm against drones is emerging due to concerns about ‘riskless’ warfare:

As someone who follows developments in humanitarian disarmament closely, I see no evidence whatsoever that a “taboo” anything like the chemical weapons taboo is emerging around drone technology per se. Despite the calls of portions of the public and a few small NGOs for a drone ban, most mainstream human rights and humanitarian disarmament NGOs are careful to say they do not object to drones per se. NGOs have been careful to distinguish their concerns over autonomous weaponry from the issue of drones, for example.

Where civil society is pushing back on drones is not with the technology itself but with the way they are used: for extrajudicial killings, in violation of human rights law and the law of armed conflict. For example the initial UN report on drones was undertaken by the Special Rapporteur on Extrajudicial Executions; and Amnesty International’s new report focuses primarily on whether targeted killings are lawful as well as whether drone strikes are proportionate, and how we would know given US secrecy around its targeting policy. The sovereignty debate primarily comes into play in these arguments in the context of trying to figure out which international laws apply, but the case against drones has never been mostly about sovereignty or about the nature of the technology per se.

It’s true those arguments can be heard in the wider public debate around drones. But if a taboo emerged against drones as such on that basis, it would be nothing at all like earlier weapons taboos. Each of those developed because the weapon either could not be used discriminately (like chemical weapons, nuclear weapons and landmines) or because they were shown to cause ‘superfluous injury’ (e.g. blinding lasers, expanding bullets, glass fragments). None of these arguments work in the case of drones. Drones kill civilians when aimed at them or used carelessly, to be certain, but the injury caused by drones is no more superfluous than that caused by other aerial weapons, and may be more discriminate in terms of casualty counts if used lawfully. Ultimately, what makes the US use of drones so reprehensible is not that they are unlawful per se, but that they are being used unlawfully to target criminal suspects without trial, and in such a way as to cause significant civilian harm outside of a conventional battlefield.

But again note the issue is not sovereignty. If the US government went about law enforcement operations in its own cities in this manner – say bombing Minneapolis neighborhoods in order to kill suspected al-Shabab associates – the outcry would be just as loud. I have no doubt it would be exactly that loud whether executed from the air or in person with ground troops launching mortars. In my view, the norm that is being asserted here is one against arbitrary killing – by drones or by special ops. So I would predict that the outcry would be similar for cross-border incursions designed to hunt and kill as for targeted killings with drones. By contrast, as I note in this article, if drones were used in a more circumspect manner in genuine wars only, they would be far more easily tolerated by the global public.  If Beehner and Young want to convince me, they need to stop comparing hunt and kill missions to raid and snatch missions and instead compare ground-based and air-based hunt and kill missions. I expect the variation they observe wouldn’t be so dramatic in that case; if it were then that would be an interesting puzzle on top of the more obvious reasons why these missions are morally different.

Still they do raise an interesting question which is why sovereignty claims aren’t equally strong for both hunt|kill and raid|snatch missions (by ground or air) since both violate sovereignty. As Beehner and Young document, they aren’t. The conclusion I draw from that, though, is not that the sovereignty norm is weaker when it comes to commando missions than when it comes to drone strikes, nor that snatch and grab missions are becoming a “new international norm” while a taboo is emerging against weaponized drones.

The conclusion I draw is that sovereignty as a norm is actually much weaker across the board now than the norm against extrajudicial killing, which is what the drone debate has really always been about but which is an issue not limited to the use of drones. Snatch and grab missions are emerging as a more palatable alternative relative to the extreme opprobrium around drones. This is not about sovereignty, I think, but nor is it about credible commitment. Instead, it’s about how to balance fundamental human rights with both state and civilian security in a globalized world. What I see is an emerging acceptance that raid-and-snatch missions to capture and then try terror suspects, in cases where extradition is infeasible, strike that balance better than either a) “targeted killings” or b) throwing the brunt and brawn of an industrialized military at a criminal network – both of which can be done by land or air and neither of which have been very effective over the past decade at winning the so-called war on terror.

No More Neocon Faux-Cassandra Posturing: American Defense is not “in Decline”