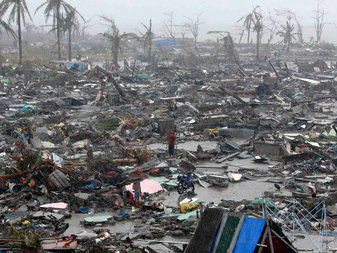 You probably saw the horrific photos and video of Typhoon Haiyan (also known as Yolanda) that made landfall over the weekend in the Philippines, with winds nearing 200 miles an hour and an immense 13 foot storm surge that decimated infrastructure, leading to wide-scale loss of life due to drowning and collapsed buildings.

According to reports, the storm left perhaps as many as 10,000 dead in the city of Tacloban alone and displaced hundreds of thousands. Even as domestic and international aid efforts ramp up, there have been  widespread reports of looting, as people who lost everything have no water, food, or shelter are desperate for supplies. No doubt some unscrupulous others have taken advantage of the chaos as well.

First of all, if you have the resources, I’d encourage you to donate to Oxfam or the Red Cross. I’d also encourage you to volunteer with the Standby Task Force and Micro Mappers to lend your time to support volunteer relief efforts remotely.

In this post, I want to raise the question about what makes Asia particularly susceptible to such devastating climate-related hazards.

As many of our readers know, I have been part of a five year research effort examining Africa’s vulnerability to climate change. As that effort begins to wind down, we have begun exploring what the next appropriate research should be. For those of us interested in what climate change might mean for security and stability around the world, there was often the assumption that Africa was the distinct epicenter of likely vulnerability, given low adaptive capacity and physical exposure to climate-related hazards.

However, while that might be true in terms of the proportion of the population affected by disasters, in terms of sheer numbers of people affected historically by climate-related hazards, Asia dominates in terms of the number of fatalities and affected populations. In examining the EM-DAT International Disaster Database records of total victims† to climate-related disasters between 1980-2010, nearly 90% occurred in Asia.˚ Of those, nearly 50% occurred in Eastern Asia‡ and another 34.62% occurred in Southern Asia.∆ So, what explains Asia’s special vulnerability?

Most of the world’s mega-cities, defined as cities with a population in excess of ten million people, are located in Asia. By one count, as many as 17 of 26 are located in Asia. When one looks at cyclone exposure, limited parts of Africa–namely Madagascar and Mozambique–are in harm’s way. By contrast, many of those Asian mega-cities such as Jakarta, Dhaka, Manila, and Shanghai are located near coasts or flood prone areas.

However, do physical exposure and population alone account for the particular vulnerability faced by Asian countries? Here, as we have argued in our previous work, both household resilience and governance matter a great deal in whether large numbers of people die from exposure to climate-related hazards. Thinking about the Typhoon Haiyan, Eastern Visayas, which encompasses Leyte and Samar, is one of the poorer areas of and had the highest infant mortality rate in the country. Thus, at the household level, we might expect this region within the Philippines to have been especially vulnerable, given lower living standards already.

At the national level, the country’s governance is more of a mixed story. The Philippines is certainly not the worst performer in the region or the world, though it has had a mixed record on corruption and a history of political instability. On the World Bank’s government effectiveness indicator, the Philippines ranks in the 58% percentile, well behind Japan (88%) but roughly on par with Thailand (60%) and China (56%) and ahead of Indonesia (44%), Afghanistan (6.7%) in the region. Would it have made much of a difference in this instance if the Philippines had governance more on par with Japan? Perhaps the storm was just too intense.

Of course, it is early days yet, and we will have to see if the government’s response is vigorous and effective. For the sake of the Filipino population in the affected years, let’s hope that they are up to the challenge.

Gender, Civilian Security and the Paradox of War Norms