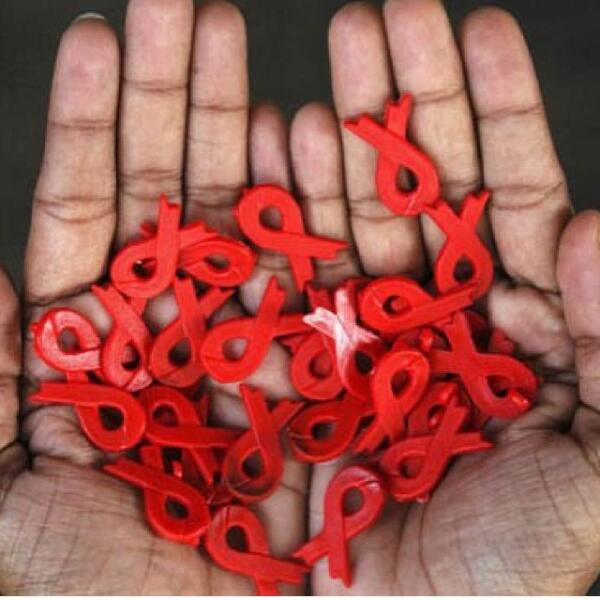 Sunday, December 1st was World AIDS Day, the annual reminder of the state of the epidemic, a way to focus attention on a problem that is perhaps less visible than it was two or three years but not defeated, not by a long shot. To that end, this week, the Global Fund to Fight AIDS, TB, and Malaria will be convening its fourth replenishment conference in Washington, DC, where it is seeking $15 billion for the next three years.

Recall, in 2011 , the Global Fund canceled its 11th funding round in the midst of the global economic crisis and concerns about some millions of the Global Fund’s multi-billion dollar portfolio having been misappropriated by recipients.  Its then leader Michel Kazatchine resigned in 2012 in the face of board contestation over his role. Since then, the Global Fund has undergone a major reorganization, and Dr. Mark Dybul, the former head of PEPFAR, was appointed in late 2012 as the new executive director of the Global Fund. Both the disease and the Fund have maintained something of a low profile, at least compared to heady days of the mid-2000s at the height of public and political awareness of the cause. So, where do things stand with the epidemic, and will the Global Fund likely have a successful replenishment conference this week?

The State of the Epidemic

Forty years ago, Anthony Downs documented how issues go up and down the attention cycle, that public attention to domestic problems is ephemeral, issues come and go in the public consciousness even before they are ever fully addressed. That is also true of the international arena. 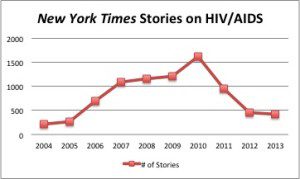 The global AIDS epidemic has peaked as a news story, but the problem has not gone away. There is no vaccine for AIDS, though there are some tantalizing approaches like the early deployment of AIDS treatment drugs to break the chain of transmission that advocates hope will help reduce the number of new infections dramatically.

While issue attention has slipped like a lot of other issues that come and go, AIDS benefits from a set of institutional and financial commitments that were established in the 2000s that did not go away even during the dark days of the global financial crisis. 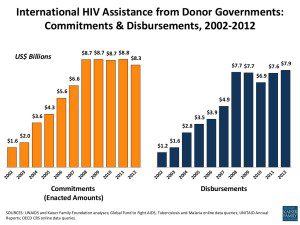 World AIDS Day is a time to take stock of the state of the epidemic, and UNAIDS and the Global Fund usually use the occasion to put their best foot forward, to highlight the successes of their organizations in the effort to address the pandemic but to also remind the public and the policy community that the work is far from done. This year is no different.

UNAIDS put out an infographic that seeks to document the story of expanded access to treatment, declining numbers of new infections (more than 30% since 2001) , particularly among  children (down more than 50% since 2001), and a 30% decline in mortality worldwide since 2004. From 1.3 million with access to treatment in 2005, UNAIDS estimates that some 9.7 million people in low- and middle-income countries had access in 2012. 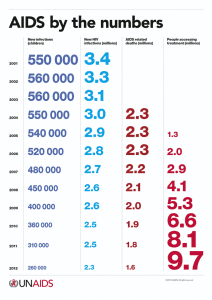 The Global Fund, as one of the main providers of finance for treatment, is highlighting its own role in expanded access that has continued despite largely level funding:

The results show that 6.1 million people living with HIV were receiving antiretroviral therapy under programs supported by the Global Fund by the end of 2013, up from 5.3 million six months ago and from 4.2 million at the end of 2012.

While these results are encouraging and on some level an incredible accomplishment, given how few people received access to treatment more than a decade ago, that coverage is far from complete. UNAIDS estimated that there are still some 28 million people needing treating worldwide, that coverage only extends to 34% of the people who need it. Some 70% of those living with HIV are concentrated in Africa.

The prevention agenda, which has been bolstered by an embrace of male circumcision and other techniques in recent years, is not succeeding nearly fast enough. Dybul for his part is optimistic that new techniques in geospatial mapping of disease will be able to isolate the pockets within countries that need attention:

A critical mass of epidemiological intelligence is revolutionizing our understanding of HIV, providing the global health community with an opportunity to laser-guide the right health interventions to the right populations. Geographical and epidemiological mapping is suggesting that HIV is being pushed into concentrated pockets amid a sea of much lower levels of infection….Using this data, ministers of health and finance, heads of state, development partners and civil society leaders are working in close partnership to structure interventions around the foci of transmission to maximize health investments.

There is some evidence to suggest that about a dozen countries in Africa have reached the tipping point where treatment access is expanding faster than the number of new infections, but whether those advances will continue depend on donors staying the course on treatment and doing better on prevention going forward. 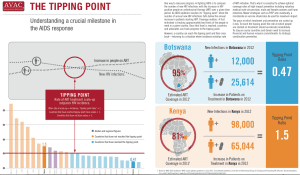 Will the Global Fund Get its $15 Billion?

Whether the Global Fund gets the resources its has asked for depends in part on the leadership on display this week in Washington.

The Obama Administration is hosting this replenishment meeting, and an American now sits at the helm of the organization. So, whatever the problems in U.S. appropriations, I feel pretty confident that the U.S. government will try to make a good showing this week.

By law, the U.S. government is constrained in contributing more than 1/3 of the resources to the Global Fund. That would mean a $5 billion contribution by the United States. The FY 2014 budget request from the Obama Administration was for $1.65 billion, a 27% increase of $350 million over FY 2012 levels. If fully funded and sustained over three years, that would be just shy of the $5 billion contribution.

The Senate and House appropriated the president’s full request, suggesting that the Global Fund continues to enjoy bipartisan support despite strong budget cutting pressures in Washington. Other donors like the UK have also followed suit with generous commitments to the Global Fund:

The UK has committed to give £1 billion to the Global Fund over the next 3 years so long as others join us in ensuring it meets its target of $15 billion and our contribution is 10% of the total replenishment.

So, chances are that the replenishment meeting will be a success this week and net the organization considerable new funds (though one reminder of the 2011 troubles was the report that two leading makers of anti-malarial bednets were suspended for contracts from the Global Fund for kickbacks to the Cambodian government for contracts).

Whether those new resources are ultimately translated into successful programs on the ground will be the great test of Dybul’s leadership in the years to come.