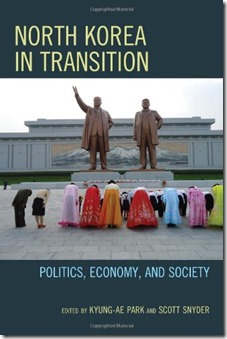 I know book reviews bore everyone, but the journal where I published this doesn’t post electronic versions of book reviews. So I thought this would be a good place to put it for internet accessibility. I tried to make this interesting by focusing on trends in NK, rather than just summarizing the constituent essays. It’s a great introduction to North Korea with lots of big names. I learned a lot from it. But I had to object to the title, likely chosen by an ill-informed editor looking for something catchy. North Korea is not in transition. If anything, we should be focusing on how remarkably stable it is. No matter what happens to the Kim regime – famine, de-industrialization, ‘factionalism,’ Chinese take-over of the economy, Dennis Rodman and his tats – nothing seems to bring down the clan or ever seriously shake it. Its astonishing ability to not change is what we should be our focus. Here’s that review:

”This useful book is a state-of-the-art treatment of North Korea (NK) for non-academics and is likely to be read widely in think-tank and policy circles. Its authors include some of the finest analysts of NK in English. Laymen will find the book appealing, because the essays, while well-informed, do not overwhelm with jargon. There is some heavy going, but one need not be a social scientist to grasp most of it. The book also ranges widely, covering issues like ideology, economic (mal)adaptation, the monarchy, and foreign relations. All these traits make it a solid introduction to the NK tangle.

That said, the book is not light. The essays are rich, and scholars will also find new ideas and themes that merit sustained social scientific analysis. For example, David Kang suggests that status-seeking is a major element of NK foreign policy behavior. This is a clever insight, and one that characterizes South Korean foreign policy too. Other researchers could formally develop and test such ideas. Specifically, academics in East Asian area studies, comparative and international politics, and, perhaps, economics, will find this book an appealing font of all manner of hypotheses and conjectures deserving full-out research.

The book is structured around four sections: NK domestic politics, economics, culture, and foreign relations. I found the first section the most gripping, because NK’s internal politics are so opaque. These authors take the regime ideology seriously and explain it in detail. Readers accustomed to thinking of NK ideology as just a fig-leaf for a nasty dictatorship (a common response in my own discipline, international relations), will find the elaboration challenging and enlightening. Conversely, I left the section thinking that if NK elites and people really believe their own propaganda, that makes the inter-Korean stand-off that much more ideologically intense and unification that much more psychologically challenging.

In an intriguing suggestion, the book also hints that Kim Jong Un (KJU) may need his own ideology. Kim Il Sung had juche; Kim Jong Il had songun. Does KJU need his own personal language of power, given that NK is hyperpersonalistic, neopatrimonial monarchy? This too is a rich question deserving research. A few contributors hint that ‘neo-juche’ may be such an effort. It may aim to reduce the wide reach of the KPA, which songun elevated but has also clearly become a massive economic parasite. If KJU is to place NK on a course of long-term sustainability – instead of the current ad hoc lurching from crisis to crisis with reliance on foreign economic hand-outs – then ideally a KJU ideology would thread the needle of a) some engagement with the global economy and legitimacy for the fait accompli of partial internal marketization, while b) nonetheless maintaining enough political-ideological distinctiveness to justify NK’s continuing existence as a separate, poorer Korean state. Indeed to my mind, this dilemma is NK’s central, existential problem: how does NK justify its existence despite the Cold War’s conclusion, German unity, a catastrophically failed economic model – especially in comparison to the South – and fifteen years of post-famine information penetration which has given North Koreans knowledge of life on the other side? I think the book would have been enriched by treating this explicitly.

Clearly NK can ruthlessly hang on through calamity; its collapse has been relentlessly over-predicted. And it can hype its nuclear weapons – ‘the life of the nation,’ KJU said in March 2013 – to deter foreign meddling. But that does not mean NK is stable or secure, or has a genuine strategy to become a ‘strong and prosperous nation.’ That SK presents an obvious and alluring alternative right next door, only worsens this dilemma. Should the Chinese ever finally fatigue of bailing out NK and covering for its antics, NK could easily return to the social chaos of the late 1990s. And the section on NK economics makes this clear. The data presented on just how dysfunctional NK’s economy is, are genuinely disturbing. A colleague once called NK ‘Turkmenistan without oil’ at a conference, and its descent into kleptocracy both at home and abroad is frightening. Another frequently undeveloped theme in NK studies is its post-Cold War mutation into a corrupt gangster state.

The cultural section too brings new information and arguments that Pyongyang kremlinologists overfocused on high politics will enjoy. There is much recent speculation that the flood of information about the outside world that partial marketization has brought will change NK hearts and minds. Indeed, it is often suggested this is the only way NK will change – through bottom-up social evolution and changing expectations – because the regime itself seems unusually close-knit in its support for Kim family royalism.

Finally, the discussion NK’s diplomacy tells the familiar but necessary story of the remarkably frustrating effort by outside powers to push NK into international norms. Indeed, NK is a case study of how a small power in a tough neighborhood can play its hand remarkably well and avoid domination by much larger rivals. KIS was a master of this, as the essays demonstrate. But NK’s continuing provocations, as well as the now-enormous gap between North and South, make it increasingly hard for NK to weave among its neighbors. Per Kang, NK simply lacks the credibility that SK has and is increasingly reliant solely on China for diplomatic and economic cover. NK would prefer to play the Six Parties off against each other, but those days are fading. The US, Japan, and South Korea are unlikely to get suckered again. NK defaulted on its Soviet-era debt. That leaves only China. As with economics, NK desperately needs a new diplomatic strategy to flourish going forward. Mudding through with grudging Chinese aid is clearly risky.

And this raises my only serious criticism of the book: it is not actually clear that NK is in transition. Clearly it should be. It is hopelessly isolated internationally, and economically it is an ‘Upper Volta with nuclear weapons.’ But NK is remarkably consistent. The Kims are still with us. The regime shows no genuine interest in unity. Economic reforms have been facile. The tyranny of gulags, repression, and indoctrination are still in place. That NK hangs on without transitioning is in fact its great puzzle to us.”

The Ethics of Casual Teaching Contracts: how we are all implicated in selling out academia and exploiting our students