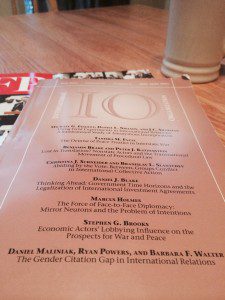 I spent last weekend with the International Organization editors and editorial board at their retreat. As a newcomer to the board, I didn’t know what to expect and was happily surprised by the depth and richness of the conversations that took place for a full day and half, mostly around how to more fully realize the academic principles to which we’re all committed – rigor, equity, transparency, methodological pluralism – in the context of a publishing environment that is constrained by the business model of publishing houses and the ever-changing landscape of social media.

One of the most interesting discussions was about diversity. Particular attention was paid to what IO as a journal should be doing to address the overwhelming new data on gender bias in citations in our profession, particularly strong in cases of junior women, and the important conversations this has stirred up among IR scholars and the wider profession. It will be up to the editors to decide on a policy to take the journal forward, and up to researchers to track whether any reforms put in place by a single journal would appear to have any effect on sub-field-wide citation rates. But simply the ability to have such a rich conversation, in which the issue was taken so seriously, in a room filled with a near-equal representation of senior men and women in the discipline, was extremely heartening. 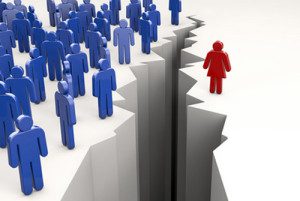 I see this as a conversation that editorial boards across the subfield should be having. Gender bias in citations doesn’t result wholly or even mostly from the actions of editors – it’s ultimately scholars who do or do not cite and largely (we think) because of the way that our social networks and the content of our syllabi privilege our understanding of the canon. But if editorial processes can play a small corrective role, we should be making that a key aspect of our work in the scholarly publishing business.

To that end I thought I’d share a range of ideas for simple, practical reforms that came up at this meeting. I doubt IO itself will pursue all of these – some work at cross-purposes, each come with trade-offs, and all will be mitigated by journals’ particular cultures, but each represents concrete steps that editorial boards in general could consider taking, based on the data we have, to address some key sources of gender bias in the discipline.

1) Journals could conduct self-studies on the gender representation in their own citations and in the authorship of their published articles, make these data publicly available and post the yearly statistics on their websites. This will provide a “race to the top,” agenda-setting effect, incentivize reforms at the journal level, and enable monitoring and evaluation of the trends over time and the efficacy of solutions.

2) In the production process, scholarship by junior women in particular could be fast-tracked so that it has a chance to get cited sooner given its impact on tenure and promotion processes.

3) As reviewers, we can do an active job of identifying relevant work by junior women to suggest to authors in the R&R stage. This extra step will require staying abreast of not only the canon in our niche fields but also new work by junior scholars especially women, and make sure it gets cited along with key canonical sources. It may mean consciously expanding our social networks to include more junior scholars and particularly to keep an eye on what junior women in our field are publishing.

4) In soliciting reviews, editors could signal to reviewers that, when encouraging authors to cite additional work, they should actively identify relevant work by junior women to suggest to authors. Editors should be willing to follow up with reviewers to ensure they have made their best effort to do this.

5) Editorial teams could consider moving journals to a gender-neutral byline system. While this would impede efforts to consciously counter-act gender bias (or measure it as Walters et al did), it might also over time make it harder to subconsciously engage in gender bias.

This list includes items that stood our for me, but it is surely not exhaustive – for one thing I didn’t start taking really good notes until the end, for another thing there are probably many ideas we didn’t even think of at our meeting. What are your ideas for best practices in this regard?