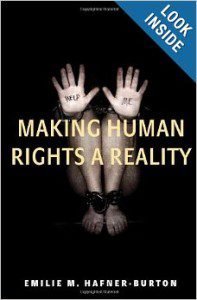 My students and I have just read Emilie Hafner-Burton‘s grand treatise on the human rights regime, Making Human Rights a Reality. Following her earlier empirical studies, this is a sweeping descriptive appraisal of how human rights law works and why it works so poorly, coupled with a level-headed argument about strategies that human rights champions or “stewards” might adopt to achieve concrete improvements in human rights performance by circumventing existing human rights machinery. The book is readable, exhaustive and pitched to a non-scholarly audience; it combines an overview of scholarship with common-sense descriptions of the human rights regime and is thus an excellent, up-to-date primer on the state of scholarship, practice and institutional design in the area of human rights.

Since international relations at University of Massachusetts-Amherst emphasizes interdisciplinary approaches, methodological eclecticism and policy relevance, I was especially pleased to read this book with my Human Security graduate students (and add it to our comprehensive exam reading list) because it exemplified so many of these same scholarly attributes. Hafner-Burton’s book is an interdisciplinary blend of legal studies, criminology and political science: she describes the institutional structure of international law, summarizes political science research on its effectiveness, and explains what criminology tells us about the sociology of deterring abuse. Bringing these literatures into conversation helps make clearer than a single political science study why the human rights regime is so often ineffective.

While this book does not present primary research on human rights as did her previous book, and therefore can’t be said to have a methodological approach, it does exhibit a methodologically pluralist attitude: Hafner-Burton reviews the statistical literature on the determinants of human rights performance as well as the experiential wisdom of practitioners to develop her argument, and she comments impartially and non-judgmentally on the strengths of each. She spends time clarifying for the reader the value of each type of knowledge in the service of developing the evidence-based causal knowledge that she argues would underpin a realistic human rights foreign policy.

This brings me to a third big win here: policy relevance. The book exemplifies exactly what I am training my doctoral students to do in their writing projects: instead of creating a research design of their own, to review existing scholarship to arrive at an empirically-informed argument relevant to policy-makers that challenges existing wisdom or weighs in constructively in a debate. Hafner-Burton’s conclusion is consistent with a brand of “human rights pragmatism” associated with Suzanne Katzenstein, Jack Snyder and others that privileges an interest-based, data-driven, do-most-good approach to human rights advocacy rather than impartial adherence to human rights procedural norms. Hafner-Burton is a well-known skeptic of the power of human rights “naming and shaming” to constrain or socialize the world’s bullies. Here she broadens her earlier argument about the use of preferential trade agreements and argues in general instead for human rights stewards to systematically identify and leverage the most effective tools at their disposal, including localization efforts through NGOs and national institutions. She also argues for selectivity: a triage approach where resources be placed in those places where they are likeliest to do some good (defined as statistically significant decreases in actual repression) rather than wasted trying to help everybody at the margins. And she argues this approach, is preferable to the rose-colored glasses worn by earlier triumphalist qualitative work on the effectiveness of human rights in specific cases, or an approach which sees the proliferation of human rights talk alone as a victory. (Though, as my student Gabriel Mares pointed out in class, a significant amount of qualitative work on human rights, particularly discourse analytical treatments and feminist approaches, are pessimistic as well even of the power of human rights talk – which can itself be used to justify abuse and violence.)

One of Hafner-Burton’s key suggestions is that human rights stewards (she counts the U.S.) should establish national bureaucracies to implement the human rights triage approach by leveraging causal knowledge about the determinants of human rights abuse. (Her book reads a little bit like a long cover letter for a position as the National Human Security Advisor.) But while all the scholarly knowledge she drops on us tells us exactly what is not working, her descriptions of what might seem a little unsurprising. The chapters on NGOs and national human rights institutions are less suggestions for “reform” as they are descriptions of the non-UN-based status quo. To me, this implies those aspects of the status quo actually are already working. This actually confirms a more optimistic view of the human rights regime, the view defended in the new follow-up volume to Risse, Ropp and Sikkink’s classic The Power of Human Rights. In The Persistent Power of Human Rights, the same authors refine their spiral model with new case studies aimed at bringing in non-state perpetrators, failing states and superpowers, and Beth Simmons’ chapter argues (contra Hafner-Burton) that even the statistical evidence is somewhat optimistic about the working of the regime. Hafner-Burton’s most important argument may be less about the overall system’s failings than about the UN machinery per se, which clearly doesn’t work as well as carefully targeted and pragmatic interventions by independent NGOs and human-right-minded “steward” states working collaboratively and outside UN clutches. The argument ultimately seems to be that states should take a page from the playbook of organizations like Human Rights Watch that have long blended principle and pragmatism. In that sense the argument is not necessarily for something decisively new, but rather for a turn away from the UN and a shift toward unabashed pragmatism by foreign policymakers. Whether we need new national bureaucracies for or simply a more clear-headed pipeline between scholars and policymakers, is not entirely clear. But Hafner-Burton’s call for human rights scholarship to be useful to steward states and for steward states to pay attention resonates loud and clear.

Tenure Letters: To Sling or to Shoot Arrows?