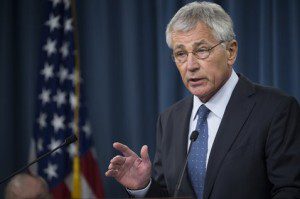 The Obama administration’s plans to shrink the U.S. military attracted intense media attention yesterday. The plan is being described as a maneuver to shift the United States’s defense posture away from protracted occupations, such as those in Iraq and Afghanistan, and toward a more conventional deterrence role.

It’s easy to exaggerate the scale of the changes to the military budget. In particular, the soundbite that the post-cut U.S. Army will be the smallest since before the Second World War is seriously misleading. According to the Historical Statistics of the United States database, in 1940, the U.S. Army had 269,023 personnel–but that total included the Army Air Corps. On December 31, 2013, the U.S. Air Force by itself had 325,952 active duty personnel. Under any plausible scenario, the USAF will continue to outnumber the prewar U.S. Army handily. Similarly, after the force cuts, the U.S. Army will have about 440,000 active duty personnel, while the Marines will have nearly 10 times their 1939 active-duty personnel level. (And none of these figures, of course, include the reserves, the National Guard, civilian personnel, contractors, or any other part of the post-Second World War U.S. military establishment.) The smallest-since-1940 number, like Mitt Romney’s campaign charge that the U.S. Navy was “smaller than it’s been since 1917”, is technically true but hardly informative. Perhaps more important, given the vast increases in U.S. military expenditures over the past fifteen years, the U.S. can make significant cuts to its military spending while remaining the world’s leading military power by any meaningful metric.

Nevertheless, whenever a great power decides to reshape its military, IR scholars should wonder what’s going on.

In this case, domestic explanations–long-term fiscal realities and short-term political calculations–explain at least part of the impetus. Over the long haul, the marginal dollar of U.S. public spending is probably better invested in research and development, infrastructure, or social welfare than in training forces to occupy and administer foreign countries. In the short term, given the Congress’s evident lack of appetite to stomach further deficits or raise taxes, federal spending has to fall, and the defense budget is too large to escape cuts.

Yet the targeted nature of the cuts suggest that there’s something more than domestic budgetary pressure at work. At The Monkey Cage, Georgetown University Professor David Edelstein proposes that the United States is “potentially an example of a ‘tying hands’ signal” in which Washington is attempting to tell the rest of the world that it is credibly refraining from launching any future occupations. Edelstein, a leading expert on occupations, believes that if the United States can undertake such retrenchments while reassuring its allies that they do not need to “develop their own militaries in potentially destabilizing ways” the new defense posture could be more effective for the United States in a number of ways.

The strategic logic might go like this. If the United States can credibly promise not to threaten (for instance) Iran with invasion and occupation, then this might allay some of the Iranian security concerns that analysts believe are at the heart of its nuclear program. Words are cheap, though, so American leaders need to do more than talk. Reducing the ability to invade and occupy other states might enhance the credibility of the promise not to do so.

Another possibility is that the signal is meant for U.S. allies. The United States would like some of its allies (especially Japan and South Korea) to pick up more of the tab for their own defense. Once again, though, allied governments might view Washington’s exhortations for them to pay more of their own way as cheap talk. By tying its hands (shrinking power projection capability), the U.S. might be sending a signal that it is committed to playing a more limited role in the provision of Japanese and South Korean security, thereby forcing its allies to increase their own military spending. (Richard Nixon attempted a similar strategy during an earlier period of relative U.S. decline with the Guam Doctrine.)

Similarly, this move might conceivably be directed at Israel. American leaders may be worried that Israel will respond to a continued warming of US-Iran relations by launching a strike against Iran’s nuclear facilities. Israeli leaders might calculate that even without explicit (or implicit) American support for such a strike, the ensuing chaos would sufficiently threaten American interests in the Middle East to force American intervention. In this case, again, American threats to leave Israel to its own devices in the event of a crisis brought on by a strike on the Iranian nuclear program might be incredible. Reducing power projection capability may enhance the credibility of threats of nonintervention and diminish the probability of Israeli adventurism.

There are two reasons to doubt that these specific rationales fully explain what the Obama administration is doing. First, as Hagel and others have stressed, the U.S. military will maintain the ability to respond effectively to crises around the world – it will simply forego the ability to invade and occupy other countries. Responding to crises in East Asia and the Middle East would be unlikely to require invasion and occupation. Thus, while the Pentagon may have tied one of its hands, it really only needs the other one to do the kinds of things that it might need to do in defense of its allies, which means that its allies can continue to free-ride safely.

Second, as Edelstein notes, the American public and the U.S. government in the post-Iraq War period are highly unlikely to be willing to invade and occupy any of its potential future adversaries. That already makes any U.S. threat to do so not credible. But if a foreign leader already strongly believes that the U.S. is unlikely to invade their country, then American hands-tying via defense budget cuts should not cause the leader to update her priors about the credibility of a U.S. threat.

So what is motivating the budget rethink? We think that there is a slightly different hands-tying logic at work. The Obama administration, including the president and Hagel, have made it clear that they think that expeditionary forces intended for occupation contribute little to American security. Indeed, it is likely that senior administration leaders sincerely believe that (as Hagel said in his confirmation hearings) “our war in Iraq … was the most fundamentally bad, dangerous decision since Vietnam”. From the administration’s perspective, the Iraq War not only cost immense amounts of American blood and treasure but did so to little strategic purpose while damaging America’s reputation as a law-abiding hegemon.

We suggest that the Obama administration is indeed trying to tie Uncle Sam’s hands, as Edelstein suggests, but not to send a signal to U.S. allies or to countries Washington might want to threaten with occupation. Instead, reducing military spending as the administration proposes will directly limit future presidents’ ability to conduct an aggressively unilateral foreign policy, thereby both making future interventions less likely and also ensuring that Obama’s successors will be more constrained by the preferences of their partners. Edelstein is right: the budget is an exercise in hands-tying. But while the budget may help the U.S. send broad, indirect signals in the long run, this is secondary to the more straightforward interpretation: these budget cuts are meant to bind future administrations from engaging in the adventurism of George W. Bush.

You Think You Have a Facebook Problem? The IDF and Social Media