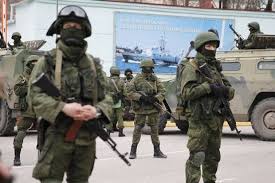 [Note: This is a guest post by Sean Kay, Robson Professor of Politics at Ohio Wesleyan University and Mershon Associate at the Mershon Center for International Security Studies at the Ohio State University. He has long-researched and written on NATO policy and worked in the US Department of Defense during the first round of NATO enlargement planning. His forthcoming book is America’s Search for Security: The Triumph of Idealism and the Return of Realism (Rowman and Littlefield, 2014).]

Russia’s incursion into Ukraine presents the United States with a dilemma. The cries to “do something” are loud. The situation in Ukraine is, nonetheless, complicated and there is as much possibility that our efforts to do something can be well-intended but inadvertently make the situation worse.

Political scientists and historians have warned for over 20 years, since the end of the Cold War and the collapse of the Soviet Union, of the deep ties that Russia has to its relationship to Crimea. Scholars and significant policy figures like George Kennan and former Sen. Sam Nunn repeatedly warned against the risks of NATO enlargement – especially expanding too proximate to vital Russian interests. No less a Cold War hawk than former Secretary of Defense, Robert Gates, writes in his recent memoir:

…from 1993 onward, the West, and particularly the United States, had badly underestimated the magnitude of Russian humiliation in losing the Cold War and then in the dissolution of the Soviet Union, which amounted to the end of the centuries-old Russian Empire. The arrogance, after the collapse, of American government officials, academicians, businessmen, and politicians, in telling the Russians how to conduct their domestic and international affairs (not to mention the internal psychological impact of their precipitous fall from superpower status) had led to deep and long-term resentment and bitterness…Getting Gorbachev to acquiesce to a unified Germany as a member of NATO had been a huge accomplishment. But moving so quickly after the collapse of the Soviet Union to incorporate so many of its formerly subjugated states into NATO was a mistake…NATO expansion was a political act, not a carefully considered military commitment, thus undermining the purpose of the alliance and recklessly ignoring what the Russians considered their own vital national interests.

With hindsight, the initial rounds of NATO membership – especially including Poland and Romania – were sound strategically and had little negative impact as was anticipated. However, pushing NATO to include promises of future membership for Ukraine and Georgia in 2008 exacerbated serious security problems in the former Soviet area and played into the hands of the strongmen who came to rule Ukraine and who have governed Russia. Russia’s recent behavior is abhorrent – but we do have to understand that as Moscow formulates national interests, they see us as having moved our military sphere of influence deep into their backyard, in ways that we would never for a minute tolerate in our own.

This context is important for understanding how the United States and its allies calibrate their response to the violation of international law that Russia is imposing on Ukraine. For much of the last two decades, the United States has proceeded on the belief that the Russians should get over their historical angst and define their interests as we advise them to. Shockingly (it seems) to us, it turns out the Russians define their interests as the Russians see them. In this sense it is our own belief in the universality of our worldview that has led us to fail to realize that much of the rest of the world sees their situation not as liberals and neoconservatives might think – but rather as realists expect.

“The reason President Obama’s Russia policy is on the rocks is that the White House pretends to be realist but acts like a liberal. It hesitates to acknowledge the legitimacy of Russian interests, perseveres in policies that are not achieving results, and refrains from using power to deter or punish actions contrary to U.S. interests…Instead of a Nixonian ruthlessness that presses our advantages or identifies common interests and sells off issues (and allies) of lesser importance to achieve them…

Schake was right – but this begs the question – if Putin is behaving like realist scholars have predicted and anticipated, how would the United States and its allies best assess Russia’s actions and calibrate their response?

First, one has to be clear eyed about the relative power situation in Ukraine. Russia has intervened in Crimea – why? Most likely Moscow is trying to secure long-term access to its naval base operations in Sevastopol while also creating leverage for shaping the outcomes of future governance in Ukraine. These are, from their perspective vital national interests that will not be highly amenable to outside pressures. For the moment, at least, Russia has lost Ukraine and is taking actions that will make it much harder to regain influence in Kyiv. In that sense, occupying Crimea is an illegitimate, but classic, power play to hold land and create leverage. It is possible that they also might be looking to accelerate processes that would lead eastern regions of Ukraine to choose to secede and join Russia – leading to a division of Ukraine.

Second, what are the risks to us? Every assessment of that must begin with the fact that right now we have an unstable but friendly government in Kyiv that has not yet made an effort to reassure the large Russian population in eastern Ukraine about their future role in the state. This is happening in a state which abuts right up against a Russia armed with nuclear weapons who has included a promise to protect Russian nationals abroad in their military doctrine since the early 1990s. Our interest is that this situation should not escalate and that a process for long-term reconciliation over the future governance of Ukraine is put in place while the current situation is calmed.

Third, if our objectives are to dissuade further Russian moves into Ukraine, while also working quietly with the new government in Kyiv to find ways to reassure the Russian populations inside the country they now govern, then our only real move here is diplomatic. President Barack Obama has said that there will be costs to Russia for its actions. But the reality is that our levers are minimal – like canceling a G-8 summit scheduled for Sochi later this spring. These diplomatic statements are appropriate, but are not likely to persuade a nation to give up on the pursuit of what it considers a vital national interest. We can state up front what those costs might be – but we have to then fasten our seatbelts because Russia has tools to retaliate – economically and geopolitically. They can, for example, cut off energy flows not only into Ukraine but deep into Central Europe. This would cause significant economic dislocation, threatening the fragile recovery from the Eurozone crisis and thus America’s economy as well. Meanwhile, there is no solution to the North Korean crisis, Afghanistan transit routes, Iran’s nuclear program, and the Syrian civil war which do not involve the Russians. There is ultimately no long-term solution to the Ukrainian crisis, given the demographics of that country, which do not involve the Russians. Moscow appears to have dramatically and illegitimately put their foot down on top of Crimea to make that point.

Fourth, we also have to ask ourselves what might we do that could create an unintended chain of events that undermine our interest in seeing the existing situation de-escalate? One thing that should be immediately off the table is discussion of NATO involvement. There are no realistic NATO options that could positively affect the situation. Any NATO role would feed right into the hands of hardliners in Moscow and those who might seek to divide Ukraine. We see NATO in the west as a benign force – the Russians see it as an enemy trying to undermine their vital interests. There are some minor military maneuvers we could take that would signal our capabilities. For example, some scheduled naval exercises near the Turkish Straits in the Black Sea would make clear who controls access in and out of the region which would lessen the relevance of Russian control of Crimea should they not alter their approach. NATO needed to meet in response so as to show its relevance and assuage its new members like the Baltic countries. But NATO did not intervene in Georgia in 2008 and it is not going to intervene in Ukraine in 2014. Statements, like that from the NATO Secretary General saying that these events “threaten peace and security in Europe” are only true if the situation escalates, and ironically, any involvement of NATO in this would likely be used a major reason for Russia to justify escalation.

When developing strategy, one has to assess the center of gravity of an adversary’s intent. In this case, Vladimir Putin seeks to position himself as a serious global player who can shape major international outcomes – as he did in the recent Syria crisis. Putin also seeks to present himself as giving voice to the deep humiliation Russia suffered at the end of the Cold War and restore its sense of pride of place in the world. The primary costs of Russia’s incursion into Ukraine should be political – the exposure of this Putinesque vision as a false promise to the Russian people themselves. By shaming Russia – at the United Nations and in other world bodies as a pariah state, with time, it can become clear that today’s Moscow is hurting Russian’s aspiration to greatness, not helping. In that sense, our first call should not be to NATO – but rather out of the Nixon-Kissinger playbook – to Beijing. By reaching out to China (which has important trade interests in Ukrainian grain) to continue to assert their deeply held principle of sovereignty as now applied to Ukraine – we can jointly signal to Putin that he is boxing his people in, and that his gambit on Ukraine will undermine broader Russian objectives. This, however, requires time, and patience, and a vigilant calibration of our own rhetoric. “Do something” is a platitude, not a strategy.

The Ukrainian situation is serious, and it is destabilizing to the immediate region. It is highly possible that, if it escalates, we will need to bear significant costs and risks. These should be limited, however, to diplomatic, intelligence, and economic tools. And we should be clear-eyed with ourselves what this means. If the situation escalates, then we risk losing essential Russian engagement on North Korea, Afghanistan, Iran’s nuclear program, and Syria. We risk economic retaliation against European allies at a time of continued deep economic difficulty in the Eurozone. It will mean owning economic responsibility for rebuilding Ukraine – requiring many tens of billions of dollars of loans from the American treasury. So, our policies need clear eyed realism – and they need to start with the basic assumption that, as bad as this is, our main interest is that it de-escalate and fast.

Nuclear weapons wouldn’t have fixed what was wrong with Ukraine