Not Just Another Word (for nothing left to lose) 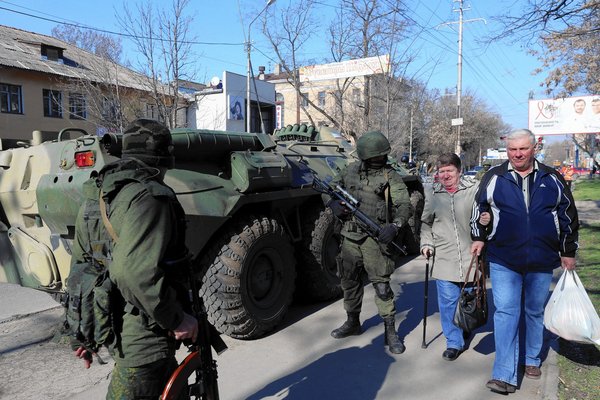 Note: The following is a guest post from Mlada Bukovansky, Professor of Government at Smith College.

The word freedom has to come into it, when speaking of the Ukraine crisis. It has become exceptionally difficult to use that term without wincing in the post-Bush era, but still I think it needs to be said. I was speaking to my mother about Ukraine and inevitably Czechoslovakia 1968 came up. I could hear in her voice the urgency and echoes of the passion that accompanied our fleeing Prague in August of that year. There would be no more freedom there. She said those who stayed behind were “doomed.” That included her own father, and many other family members besides. My initial reaction to her use of the term – doomed – was to dismiss it as hyperbolic, and that it may be, but I know what she means.

The power politics and legitimacy of the interests involved, the hypocritical orientation to international law by all sides, the lack of will by the U.S., the EU, and NATO to do anything painful in response to the annexation of the Crimea, as well as the assignation of blame for what triggered the violence in Ukraine has been well covered in many threads, from many angles. What is pressing me to write now, though, is the sense that not enough attention has gone to what will happen, and what has already happened, as in Georgia, to the people coming into Putin’s orbit. They are losing their freedom, and by that I mean something very specific. They are losing what can be called republican freedom (again, take your mind off Bush, please) – the freedom from arbitrary power. Because that is what Putin is exercising: arbitrary power with little restraint (I won’t say no restraint). He is of course not alone in this in our world, and there are arguably far worse villains operating with impunity, but he is operating so in Europe, and as tired and elitist a cliché as that may sound, this makes a difference. Because presumably European institutions, as so the American institutions which share their core ideals, are designed to restrain arbitrary power – that is arguably the central and most critical mechanism from which many of our other advantages and capacities emanate.

Back before the end of the Cold War blurred our vision there was an international mechanism that could, however imperfectly, be operationalized to restrain arbitrary power on a broader scale, outside the domestic arena, and that was the balance of power. Vilified though it was by Hamilton and the Federalists, not to mention Wilsonians and other idealists, it has periodically had idealizers of its own. Because the U.S. and its European allies have somehow assumed that “victory” in the Cold War meant that such balancing was no longer needed — partly because of some mistaken impression that the battle was over ideology and that “ours” had “won”, but partly also because of an aversion to the bloodshed we attribute to the history of that balance of power system – we changed our foreign policy orientation to one of putting out fires in marginal trouble spots and “integrating” or socializing rising powers to “our” liberal order. Perhaps thereby diluting it beyond recognition. But that narrative of socialization appears to have run its course, at least for now.

So I would like to put in a plug for freedom as a moral criterion with which to assess the current crisis. Because we do need to assess it through a moral and not just strategic or social scientific lens. Otherwise, why bother doing anything at all? However fraught that ideal of freedom may be, there are worse guiding principles. It need not be universally applicable, nor generalizable in some broad way, in order to be a powerful element in any judgment or decision about to view the expansion of Russian power into the lands that bridge east and west.

I asked my mother, what you would have us do; what do you think can be done? She did not have an answer, and neither do I. But I do know that we should be knocked out of our complacency about the spread and viability of our liberal order by what is happening in Ukraine.