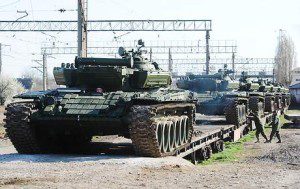 “The hour is getting late…all along the watchtower, princes kept the view…two riders were approaching, the wind began to howl.”

America and Russia are not engaged in a new Cold War, but Russia is playing the global menace du jour. The U.S. and Europe need to take more aggressive action to prevent the annexation of eastern Ukraine, and time is short. Beyond this crisis the West needs an updated defense posture, but for now the road ahead is clear.

Russia will take as much of Ukraine as the West allows, nothing more, nothing less. Yet few in Washington and Brussels seem to understand this. In recent weeks the view among the cognoscenti was that the crisis over Ukraine was largely over.  Yet little in the U.S.-European response has changed. Hence, the incentive structure that failed to prevent the Crimea annexation is not likely to prevent further dismemberment. President Putin views the West as weak, which has kept him emboldened.

True enough, Putin has long been adding up sleights from the West: NATO expansion to Russia’s border, the Kosovo War and the bombing of Serbia without UN Security Council approval, the same for the Iraq War, U.S. support the Ukraine and Georgia revolutions, aiming to install radar stations in Poland and the Czech Republic, and NATO’s nearly offering both Georgia and Ukraine membership.

Russia is not “back” so much as acting out again in its own region of the world. Its 2008 invasion of Georgia, notably, came after the end of the Kosovo War when NATO and Russian troops raced to be the first to occupy a former Yugoslav Army base on the outskirts of Pristina. Russian Foreign Secretary Lavrov at the time flatly stated that the West was forcing Russian to go to war somewhere. After making good on that threat in Georgia, Russia kept troops in two breakaway regions of the country that are now considered in limbo. At the time the Bush Administration did nothing, which was a strategic blunder that is still paying dividends—just not to the West and its allies.

So after a period of virtual strategic irrelevance, Russia has achieved a Pyrrhic victory. Putin has gained Crimea, but he has cost Russia a great deal in both economic and reputational terms, made a mockery of future claims of any imperative for the West to gain approval of the UN Security Council for crisis interventions, and above all lost the rest of Ukraine.

Or has he? Will Putin seek further Ukrainian territory in the Russian-speaking east? Russian has had over 40,000 troops and sizable collection of military hardware massed near the border for weeks, and now a Russian fighter has buzzed a U.S. destroyer. It should now be clear beyond a reasonable doubt that western conventional deterrence has not been restored, and the mere threat of further sanctions is essentially meaningless at this stage.

Far more costly economic sanctions are called for, but in days not weeks western allies need to step up aerial patrols and stage a NATO ground exercise in Poland, in order to establish credible deterrence. A show of force is key to avoiding having to use force, and still achieve one’s objective.

Meanwhile by openly accusing President Obama of appeasement, the American political right has only reinforced Putin’s perception. Yet in the process it made an unintentional but crucial strategic point: other countries also need to be deterred from territorial takeovers, especially China. The aborted Syrian intervention already degraded Western deterrence, and a measured response to the annexation of Crimea could easily lead to a Chinese occupation of the islands it claims from Japan.

The fallacy of those advocating a buildup in Asia and drawdown in Europe is now clear. The U.S. commitment to its alliances in both the Asian and European spheres must be sufficient to achieve its simultaneous security interests. But with economic austerity and a decreased defense budget, the U.S. cannot build back up in Europe AND pivot fully to Asia. As a consequence the U.S. needs to rely on partners to a greater extent than in the past.

In addition to NATO, the most capable and like-minded bilateral partners are France, the UK, and Germany. Despite budget cuts, they have made their military forces more capable and shown an increased willingness to act even when the U.S. is reluctant to lead. This new “lead nation” model calls for rotating which country spearheads a particular crisis intervention, with the others playing support roles by providing smaller scale but vital assistance.

On-the-fly uses of this yet to be fully developed model were on display in the interventions in Libya and Mali, as well as the near intervention in Syria. It is time to put this model fully in place, including in the Pacific theater by partnering with Australia and an increasingly activist Japan under Prime Minister Abe.

But for now the U.S. and Europe need to ignore public opinion and do what it takes to meet their mutual strategic interests: prevent the Russian annexation of eastern Ukraine by using ground troops in a major exercise in neighboring Poland and with Ukraine’s permission using NATO aircraft for surveillance missions inside its territory.

Otherwise, the West can kiss goodbye a major strand of what remains of the current international order. It will have left Ukraine in the lurch—right as it was lurching toward the West—and allowed Vladimir Putin to accomplish more than all the post-Stalin leaders of the former Soviet Union combined.

[This is an updated version of a previous post of mine, but the hour is getting late]