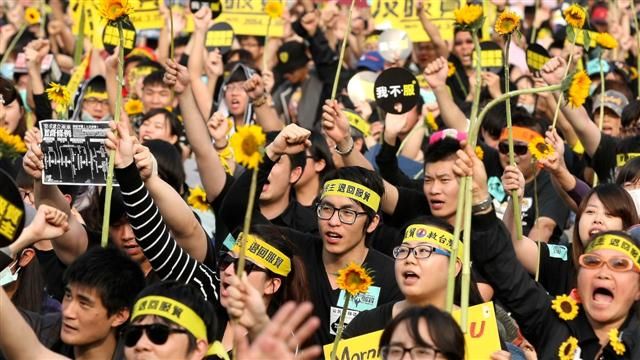 At around 7:30pm on Tuesday, March 18, around 300 protesters scaled the fence around Taiwan’s Legislative Yuan (Taiwan’s equivalent of a parliament) and occupied the building. The protesters then barricaded themselves inside the legislative chamber and began organizing, with the help of opposition legislators and the acquiescence of “patient, though confused police.” The executive branch in Taiwan probably* does not* have the authority to send police inside the legislature, so when Legislative Speaker Wang Jin-pyng (王金平) refused President Ma Ying-jeou’s (馬英九) request to evict the occupiers, they gained a certain measure of security.

By the following day, the protest leadership had elaborated its demands, while the streets outside the building had filled with sympathetic protesters, advocacy groups, volunteer staff, academics leading discussions, and stages for speeches and musical performances. This core protest organization developed very quickly and persisted – despite the trials of March 24, when riot police used force to decisively end an attempt to occupy the Executive Yuan, and even after April 2, when notorious “former” gangster Chang An-le (張安樂) raised a counter-protest. What became the “Sunflower Movement” organization also led a massive rally last Sunday, March 30 outside the Presidential Palace that drew close to 500,000 people; the coordination of this event was so thorough that by two hours after the rally ended, the streets were entirely clear of both people and detritus. The protest continues today, though the leadership has just announced they will leave the Legislative Yuan on Thursday, April 10.

To many, the spark motivating this protest was oddly obscure. On July 3, 2013, Taiwan and China signed the Cross-Strait Service Trade Agreement (CSSTA), which would, for example, allow greater Chinese investment in Taiwan’s banking and telecom sectors. After working its way though a series of widely criticized consultations, on March 17 the chair of the relevant review committee, in violation of an agreement with opposition lawmakers, announced the CSSTA had cleared committee (timeline here*). This amounted to legislative approval of the bill, since the ruling KMT party has enough votes to pass it. The protesters moved to block passage, and demanded that a new oversight structure be put in place governing agreements with China. They also demanded that the CSSTA bill be carefully reviewed after implementation of oversight.

These events raise a host of fascinating puzzles, but I will limit my discussion here to two that draw on the social movements literature. First, how did anger at an ostensibly minor procedural violation explode into what some continue to call a “constitutional crisis”? Second, what are the likely outcomes of the protest?

Charles Tilly’s (2002, 2005, 2008) explanatory framework still applies remarkably well here. Tilly argues that modern protesters’ “repertoire of contention” is marked by the application of modular performances to moral persuasion. More specifically, to have much chance of effectiveness, protesters must persuade the public (and government) that they are what Tilly referred to as WUNC: worthy, unified, numerous, and committed.

The Taiwanese protesters quickly demonstrated that they were numerous: within days, even skeptical news outlets were acknowledging that thousands of people were protesting daily. Occasionally those numbers were still brushed off as inconsequential, but the roughly 500,000 who marched on the government last weekend decisively ended such talk. The protesters have also demonstrated commitment: hundreds to thousands have been sleeping on cardboard beds on the street each night; thousands peacefully resisted the occasionally violent attempts by riot police to remove them from the Executive Yuan; and the protest leadership has continually occupied the Legislative Yuan (at times without air conditioning) for almost three weeks. The protesters have also been remarkably unified: despite rumors that a split between moderates and radicals led to the attempt to occupy the Executive Yuan, there were no major public disagreements until today’s announcement by the protest leadership that they will leave the legislative chamber later this week.

The worthiness criterion often hinges on a lack of violence, and despite portrayals of the protesters as violent, lawbreaking hooligans (once even as terrorists), their tactics have been almost entirely peaceful. Worthiness also, though, implicates the movement’s goals and symbolism. The simplest way to illuminate how judgment of these factors is playing out is to examine the dominant narratives over the past few weeks.

Early in the course of the protest, the rallying cry (and Twitter hashtag) was simply “Oppose the Services Trade Agreement!” (反服貿), with the government responding bluntly that the agreement would pass no matter what the protesters did. However, the narratives of contestation in this protest, never so narrow as either side initially portrayed, soon coalesced around three more fundamental issues: the rule of law, democracy, and fear of China.

The KMT-led government has largely clung to a narrow definition of legality: Ma and party legislators argue that the pact was legally signed and submitted to the necessary consultations and review, so they need not and will not concede. This also became the KMT’s basis for criticizing the protesters’ actions as unlawful and obstructive.

Strictly speaking, this criticism is true. Some of the protesters’ actions – certainly the occupation of the legislature and executive buildings – were likely illegal. However, the protesters counter this rhetoric in two ways. First, they argue that the agreement was negotiated in secret without legislative oversight, and thus it is fundamentally undemocratic – the image of a “black box” (黑箱) has been central to the protests. Given the youth of Taiwan’s democracy and the pride Taiwanese take in it, this point resonates strongly. Second, they point out that many have been demanding more review of this agreement for almost a year, to no avail. They therefore argue that Taiwan’s rule of law has failed them and that their actions have been a last resort to force the government to respond to the concerns of what some polls indicate to be a majority of Taiwanese. An argument that the government ignores civil society has been prevalent for years now, so few who were not prior supporters of the KMT appear to buy the government’s arguments (Ma’s approval rating had dipped as low as 9% before this crisis began). The protesters largely appeared to prevail in this particular rhetorical battle over the “worthiness” of their actions.

Moreover, the protesters have had another, even stronger narrative from which to draw: that of the threat China poses to Taiwan. The arguments here are manifold and have continued to multiply. They include the possibility that Chinese managers will start censoring Taiwanese media, the worry that Taiwanese farmers will suffer, the fear that economic domination will lead to a loss of autonomy and turn Taiwan into the next Hong Kong, and – bringing the protesters’ narrative full circle – that Chinese influence will cause Taiwan to lose its cherished democracy. The KMT government responds by arguing that this pact is just about economics – an absurd claim about any agreement with China and one that is particularly tone-deaf in the Taiwanese context. Given the still-strong opposition against unification with China here and the broad support for the protesters, it is not hard to understand why the KMT argument isn’t sticking. To date, therefore, the Sunflower Movement appears to have satisfied Tilly’s “worthiness” criterion.

All this might lead one to think the KMT, and especially Ma Ying-jeou (馬英九) himself, would be starting to yield. However, this is one major outstanding puzzle: Ma and the vast majority of KMT legislators have not budged on the CSSTA. At all. While willing to enact an oversight mechanism and continue reviewing the CSSTA, even Speaker Wang Jin-pyng’s (王金平) defection on April 6 to offer a compromise to the students did not spur the rest of his party to consider enacting new oversight before again reviewing the CSSTA, as the students have been demanding. Instead, the rest of the party was “shocked” and angrily rejected his proposal.

This brings me to the second question I posed above: what are the likely outcomes of this protest? In the short term, a new oversight framework looks likely and the CSSTA also looks likely to be significantly delayed, at the least (though calls for renegotiation persist). Casting further ahead, though, Doug McAdam and Sidney Tarrow also offer a framework for thinking about how the Sunflower Movement will affect Taiwan’s “seven-in-one” elections at the end of the year and the next presidential election in 2016. McAdam and Tarrow posit several mechanisms through which social movements can influence political actors in electoral campaigns. In this case, the most relevant are (1) joining an electoral movement or becoming a party; (2) engaging in proactive electoral mobilization; and (3) polarizing political parties internally. On these points, I quote Dafydd Fell of the Taiwan Studies Centre at the School of Oriental and African Studies:

“…the effect of the current demonstrations on party politics [seems uncertain]. The DPP [Democratic Progressive Party – Taiwan’s opposition] has struggled to find a role as social movements remain suspicious of it and it has tended to be on the sidelines of most of the post 2008 protests. If some kind of party is established out of these protests it is unlikely to be able to make a breakthrough in Taiwan’s electoral system… It is quite likely that some KMT politicians will try to appeal to voters by keeping a distance from Ma. This is particularly likely to be significant if Ma has a clear preferred nominee for presidential succession. It appears that some leading KMT politicians are taking a cautious position on the student protests, waiting to see how the events develop and how public opinion swings.”

The protesters have already leveraged splits within the KMT, as highlighted by Wang Jin-pyng’s (王金平) initial refusal to remove them and his unusual defection from the party line on the morning of April 6 to promise that an oversight agreement would be passed before review of the CSSTA resumes. As Fell notes, though, it remains unclear whether the movement will have any lasting effect on the KMT’s electoral prospects, especially given that the DPP has not yet provided convincing alternatives. However, as long as the Ma administration remains totally intransigent, damage to the KMT’s reputation continues to accumulate and a consequential shift in framing seems ever more likely. Much will also depend on the administration’s response to the departure of the students on Thursday. Will they be arrested or left free? How will the pending lawsuits against them proceed? Will the street protests continue after the occupation ends?

The answers to these questions will not be forthcoming for at least a few days. Nonetheless, it is already clear that an initially small group of protesters managed to tap into a vast reservoir of discontent with the KMT and the Ma administration in order to peacefully mobilize an enormous number of people in support of greater transparency and democratization in one of the world’s youngest democracies. Even if the Sunflower protesters only obtain minor concessions, this kind of mobilization alone was no small achievement.

*(There has been relatively little good reporting in English on this issue, so many of the links here are of mixed quality. I have, however, checked my information to the best of my ability across both English and Chinese-language sources, including local television reports. In a few cases in which English-language sources are not available, I’ve included links to Chinese-language sites. These are marked with a “*”.)

You Make My Work (Im)Possible: Reflections on Professional Conduct in the Discipline of International Relations