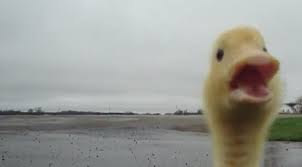 Thursday Linkage: Get the Duck out of this Semester

With the tale end of this semester bearing down on me, this Duck is barely keeping his head above water. Fortunately, time has stopped and nothing has happened in the world. Ukraine is fine (no more Russian incursions). The global environment has put the threat of major disruption from climate change on pause. It’s clear skies in Beijing. All the poachers of wildlife around the world have dropped dead. I wish. Read on for what’s really happening.

How many days was Beijing polluted between 2008-2014? Breaking down the data by U.S. and Chinese standards: pic.twitter.com/HlwjGbVMeA

Your Moment of Zen

This photo, one of my all-time favorites, speaks volumes about development. Does anyone know who took it, or where? pic.twitter.com/ir0fpfLgJf